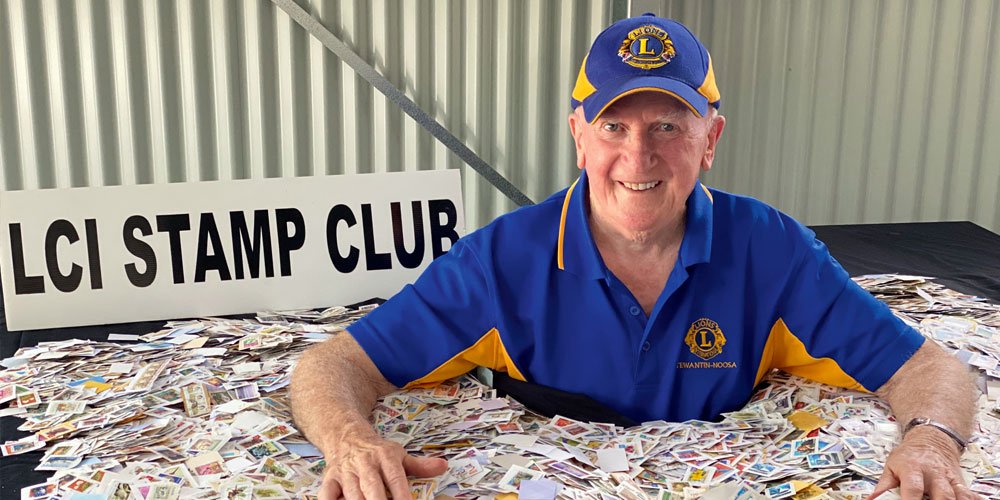 Sorting through thousands of stamps is a dream day for a Pacific Paradise philately enthusiast hoping to make a difference to the lives of children with mobility conditions.

As secretary of the Australian Lions Stamp Club and a Lions Club member for 40 years, Ross Paine is always on the lookout for stamp donations to sort and
sell at auction.

“I started this project with another Lion over the other side of the continent when we were at an international Lions convention in Brisbane in 1991,” Mr Paine says. “We decided we should be doing a bit of recycling of stamps as a fundraiser.

“We started off in a small way and it has really taken off since then.”

The collected stamps were given to a charity in Sydney until the club began donating the money to the Australian Lions Children’s Mobility Foundation in 2004.

“[The foundation] was set up only three years earlier to provide walking frames for children born with cerebral palsy.

“The club I was in at the time down in Wollongong, we purchased a walking frame for a child, and I was fortunate enough to see that child get fitted in this frame.

“It was very emotional to see a kid who had been crawling around the floor all of a sudden, at five years of age, standing up for the first time.

The collection drive has “taken off” in the past three years with more than a tonne of donated stamps raising $167,000 for the project. Now, Mr Paine is calling on residents who have unwanted collections, including albums, stamps cut from envelopes, first day covers or mint stamps to consider donating them to the cause.

“Everything that we get we sell in bulk. Most of them are Australian stamps and most of them have been just picked off envelopes. We sort them into four different groups, depending on where they are from and how much they are worth, and put them into a wine box.

Mr Paine now has assistants helping in New South Wales, Victoria, Western and South Australia and Tasmania and says a few rare stamps have been discovered across the country.

“The fellow in Sydney picked up a Penny Black, which is one of the most valuable stamps in the world,” he says. “The Penny Black was the first stamp issued in England back in the 1800s.

“We also get a lot of stamps prior to federation in Australia in 1901.”

An avid stamp collector himself, Mr Paine donated his own collection to the project and has been recognised with an OAM for his contribution to the Australian Lions Stamp Club.

“It’s virtually a full-time job,” he says. “I’m going to hit 80 this year and that’s all I do. I play with these stamps six hours a day, seven days a week.

“It’s mediation; the mind goes into neutral and puts everything else out of it and I can sit for hours.”

Anyone wishing to donate their stamps can contact Mr Paine at rosspaine@bigpond.com or 0419 449 881.