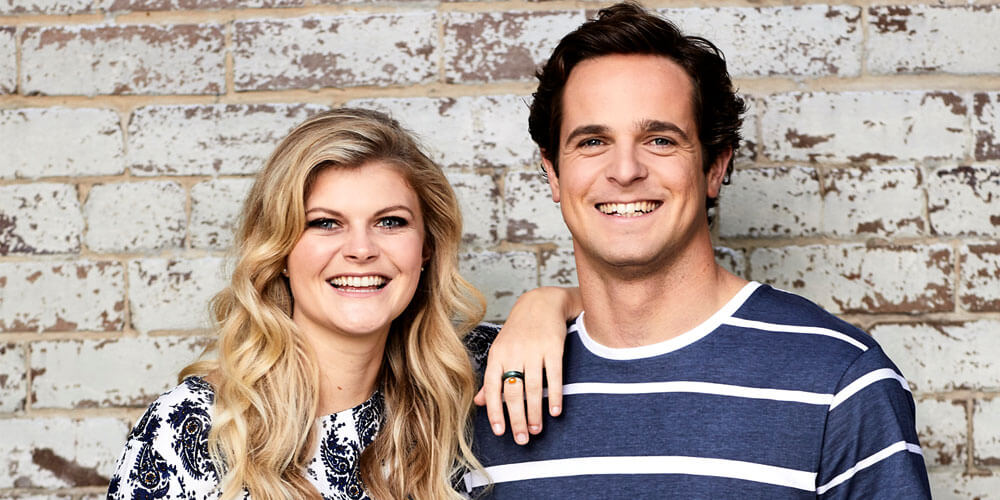 There are few relationship stress tests as intense as entering a national cooking television show when you have never cooked together… but trying to do it when one half of the duo can barely find their way around the kitchen takes it to a whole new level.

This is what My Kitchen Rules contestants Ash Holmes and Matty Thomas decided to do despite only dating for 18 months when they walked into the pressure-cooker of the Channel Seven reality  show.

In fact, the 25-year-old registered nurse and 26-year-old exercise physiologist had not lived together or travelled together either.

The down-to-earth Sunshine Coast residents caused a stir in the first episode of the 2018 season by openly declaring that Mr Thomas didn’t actually know how to cook, but had won over hearts around the country before they were eliminated on Monday night.

“I’m no good in the kitchen. My mates think it’s hilarious… they know I can’t cook. But I know how much it means to (Ash), so I was keen to give it a bit of a crack,” the Mudjimba resident says.

Mr Thomas admits he hadn’t seen a single episode of MKR when Ms Holmes asked him if he’d apply for the show with her.

“I wasn’t into it, I was definitely not that excited about going on it initially,” he tells My Weekly Preview.

But Ms Holmes, of Buderim, says she didn’t understand the full scope of how much coaching and guidance Mr Thomas needed in the kitchen until the night before they arrived at the first instant restaurant in New South Wales, with Italian brothers Josh and Nic Sama being the first to cook their three-course meal for the first round.

“To be honest, we’d never really cooked together before and while I’d cook dinners on and off and bake, it was a natural thing for me, so I assumed Matty had some form of cooking knowledge and ability, even if it was basic,” she says.

“But when we started cooking, I found out how far away he was from being able to cook, and we were already in the competition and through, so it was like ‘oh bugger’.”

They decided to lay all of their cards on the table with their competitors and tell them what their situation was.

“We hoped one or two of them might give us a sympathy vote when it was our turn to cook, but we quickly realised that was never going to happen,” Ms Holmes says.

The bubbly couple struggled through their instant restaurant, where they served a calamari salad, pork sliders and an espresso crème brulee, and gained an overall score of 46 out of 130, which was the second lowest of the round.

Despite the pressure, Mr Thomas says they strapped themselves in for the ride, “gave it a go and had some fun”.

“It wasn’t super-stressful because we didn’t have high expectations and we didn’t talk ourselves up, we just did what we could do,” he says.

Although she had to take full control in the kitchen, Ms Holmes says she was able to get Mr Thomas chopping, peeling and assisting with plating up the meals.

“He was doing the bare minimum and I couldn’t delegate as much as I’d hoped. There were so many emotions for me, but for us being able to cook together and managing to get through it on a positive note and not screaming and yelling at each other, it was a huge high for us,” she says.

Celebrity chef Colin Fassnidge joined them in the kitchen in the Elimination House, where the Group 2 contestants were both guests and jury, deciding who was sent home.

Sadly, Mr Fassnidge’s tips weren’t enough to save the duo, with their main dish – falafels with yoghurt flatbread and garlic sauce – not enough to impress judges Manu Fieldel and Pete Evans, netting them scores of two and three respectively. Their overall score of 67 out of a possible 140 was no match for opponents Stella and Jazzey’s 103.

Ms Holmes says the experience was “a helluva ride” and even if she was given another crack at the competition, she wouldn’t choose anyone else as a cooking partner.

“I could have (chosen someone else), but that wouldn’t have been fun. It’s the most amazing experience we could ever have asked for,” she says.

Ms Holmes says she was excited to have a VIP seat at the table for this season, but admits she was taken aback when Victorian best friends Roula and Rachael and New South Wales sisters Jess and Emma immediately clashed.

“We didn’t even know anyone and people started having opinions and throwing out strong comments about one another, I thought it was crazy,” she says.

“We just let all the big personality people just battle it out and have their time. They were all pretty keen to chew each other’s heads off, so we’d just sit back and listen,” Matty adds.

Despite going into the competition as a cooking novice, Mr Thomas admits he now has a passion for cooking and is experimenting with “whipping up new things”.

“I definitely know how to be a bit more of an assistant in the kitchen now. You learn a lot about each other in a short space of time when you go through an experience like that,” he says.

The truth is out there
Open for business