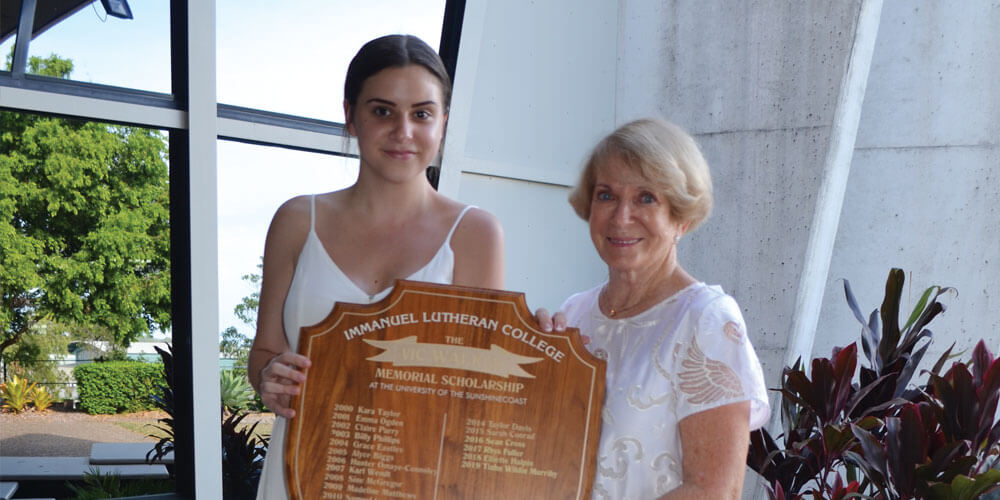 Tiahn Wildin Murrihy has made history by becoming the first Immanuel Lutheran College (ILC) student to receive both of the school’s prestigious Vic Walker accolades.

Last year, Miss Wildin Murrihy was presented with the 2018 Senior Secondary Vic Walker Achievement Award for best all-rounder and on March 7, she became the 20th recipient of the prestigious Vic Walker Memorial Scholarship.

In her final year of high school, Miss Wildin Murrihy was the president of the college’s Eco Club (she had also been a member for seven years), won academic awards, was presented with cultural awards for her music accomplishments and was a great athlete.

Now studying a Bachelor of Nursing Science at the University of the Sunshine Coast, Miss Wildin Murrihy aspires to gain a masters in paediatric nursing with the goal of working with international humanitarian organisation Mercy Ships.

As the recipient of the Vic Walker Memorial Scholarship, which is worth $9000, Miss Wildin Murrihy will have her first year of university fees covered.

Jocelyn Walker established the scholarship in memory of her late husband, a successful businessman who created the iconic Moby Vic’s complex on the Bruce Highway in 1978. At the time, it was the first 24-hour service station in Queensland.

Mr Walker was a passionate advocate of developing youth to empower them to live their best lives and was active in surf lifesaving, Rotary, public speaking and ILC, where his children Wendy and Drew were graduates in the classes of 1989 and 1993 respectively.

Mr Walker presented the first Senior Secondary Vic Walker Achievement Award before he passed away in 1996 after a battle with cancer.

Mrs Walker says the scholarship was later created to ensure his desire to “progress youth” continued. “Vic had an enormous interest in promoting and progressing Immanuel Lutheran College as it gave our children a terrific start in life,” she says.

“I am also a University of the Sunshine Coast foundation board member, which I have now been a part of for 22 years, so I thought it would be wonderful to link our two passions and form the scholarship.”

Like the 19 recipients before her, Miss Wildin Murrihy impressed the panel of judges, which includes Mrs Walker and her two children as well as representatives from ILC and USC, with her sound academic record, dedication to ILC and a consistent commitment to community service and generosity.

The 20th year of the scholarship was celebrated with a private gathering at the college, which was attended by 30 guests including some past scholarship recipients.

Mrs Walker says she feels like she has gained 20 new family members since the scholarship was created.

“Each year I get letters and cards from them all, particularly during their time of study at USC, and they give me updates of their results each year and share what their future goals are,” she says.

“When I reflect, I feel like I’ve gained so much and these 20 people have gone on to work extremely hard and have been great ambassadors for the scholarship.

“[The scholarship] will continue long after I’m not here, Wendy and Drew will use it to continue to support and foster young people to achieve their dreams.”