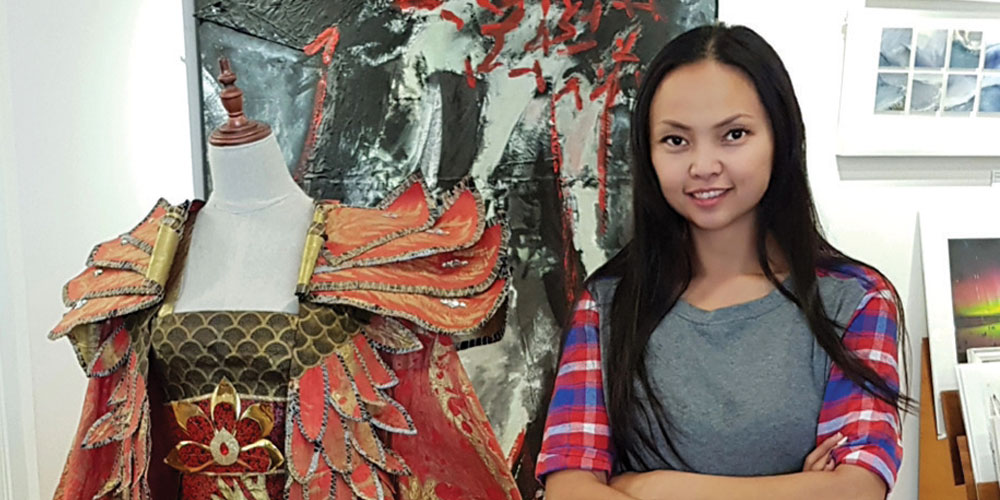 Creativity is a way of life for Cynthia Hawkins. From hair styling to makeup artistry, graphic design, photography, painting and fashion design, there is nothing this single mother-of-three can’t do.

So when the Tasmanian resident turned her hand to creating wearable art for the state’s respected Paper on Skin competition last year, it is not surprising that magic unfolded.

It took more than 300 hours of highly detailed work to combine a variety of papers and paper yarn for Ms Hawkins to pay homage to Empress Wu Zetian, the only female emperor in the history of China.

Ms Hawkins took out the Public Vote Award for her entry, which was titled Empress at Forbidden City, and placed herself firmly in the spotlight of up-and-coming designers to watch.

Ms Hawkins will be among the Australian artists who showcase more than 40 creations on the catwalk at the Australian Wearable Art Festival in Eumundi on May 24. The festival forms part of Sunshine Coast Council’s Fabric 2019 Slow Fashion Artful Living Program.

Keeping her cards close to her chest to provide a surprise for design enthusiasts who attend, Ms Hawkins says the creation she is entering in the Coast competition is the polar opposite of the delicate work needed for her paper gown, with a number of heavy-duty tools used to bring the piece to life.

“I look forward to seeing what is going to be on the runway at the Australian Wearable Art Festival and to meet like-minded people who have put in so much time and effort to create something that people will be fascinated by.”

A promotion for her job as a disability support worker meant Ms Hawkins was unable to enter the World of Wearable Art in New Zealand and Wearable Art Mandurah this year, so she has dedicated herself to making a splash on the Coast later this month.

The Australian Wearable Art Festival will have four main categories as part of its gala parade competition – Avant Garde, Floriana, Trashion and Sustainable – as well as additional prizes for Haute-Couture, Headpiece, First Nation and Best Tertiary and Secondary Student pieces.

Event curator Wendy Roe says guests are in for a spectacular showcase where fashion is taken to the extreme. “We have a 16-metre runway where haute couture will meet costumery, where waste will be turned into waistcoats and flower crowns become complete flower dresses,” Ms Roe says.

Festival judge and fashion designer Cindy Vogels says the festival allows artists to extend their practice and provides a platform for a wider audience to be inspired by form, structure, texture and colour, often using an eclectic mix of unusual materials. “Wearable art is a unique form and really embraces the idea that we can live and wear art every day,” she says.

Award-winning artist Jandamarra Cadd and special guest judge Peter Dwyer of the Whitehouse Institute of Design will join Ms Vogels on the judging panel and a total of $3600 cash will be awarded on the night.

Tickets are still available for the festival, which will be held at Eumundi Square on May 24 from 6pm. To find out more, visit australianwearableart.com.au.

Kids at the coalface
The final countdown