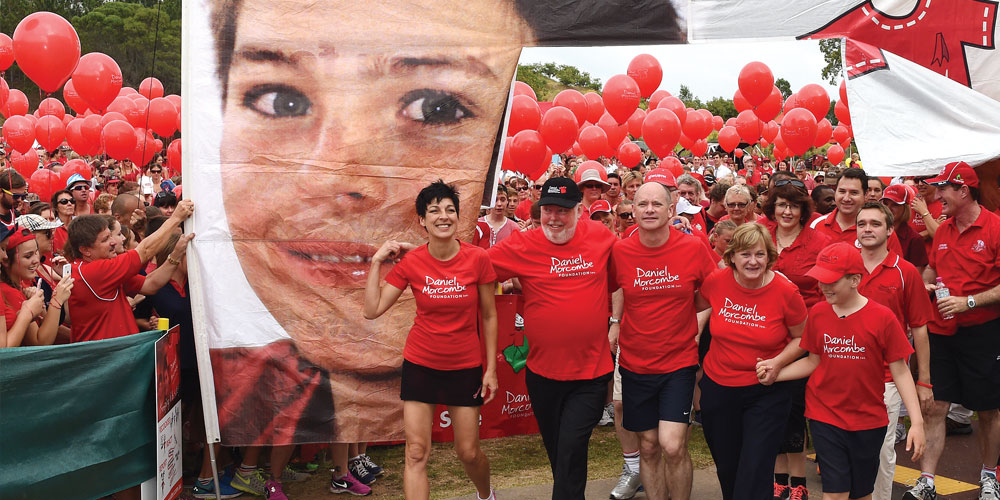 Daniel Morcombe is a name forever etched into the Australian psyche. He is the 13-year-old Palmwoods boy who went missing on December 7, 2003.

The red T-shirt he was wearing has become an iconic symbol of child safety in this country due to the tireless work his parents, Bruce and Denise, have put in since 2005 to build up the resilience of our children and strengthen the resolve of parents, teachers and carers to have the tough what-if conversations that have the power to save lives.

As has been the case on the last Friday of October for the past 15 years, a sea of thousands decked out in red have participated in the four-kilometre Walk for Daniel from Suncoast Christian College to Briggs Park in Palmwoods in honour of Daniel, who was finally found in 2011, his abductor and murderer now locked away in jail.

The annual Day for Daniel is much more than a tribute to the youngster; it is a national day of action for child safety.

More than 3600 schools and day-care centres across Australia have tuned in to the Daniel Morcombe Foundation’s Biggest Child Safety Lesson and learnt how to Recognise, React and Report unsafe situations.

The resources provided to the community free of charge by the Daniel Morcombe Foundation have already created waves of positive change.

The foundation sent out a survey to Queensland schools last year, which included a question about students reporting crimes against them following Day for Daniel or Child Safety Week education events.

Of the 500 schools that participated in the survey, six per cent of schools reported concerning disclosures.

“It doesn’t sound like a lot, but there were 106 disclosures as a result of education and creating an environment where children felt safe to let a trusted adult know that something had happened to them,” Mr Morcombe says.

“These kids probably would never have come forward without that.”

Mrs Morcombe says as well as raising body awareness and empowering children to set boundaries around physical contact, children are becoming less scared to ask for help if something does happen to them.

“In the past, the victims have been so frightened and there was great fear around disclosing,” Mr Morcombe says. “More people now understand it is not your fault if you are a victim of crime. It’s especially never a child’s fault, and if you let someone know, we can look after you.”

Mrs Morcombe adds, “Teachers often come up to us after one of our in-school education events, which Bruce and I still do, and let us know in person that a child has made a disclosure while we are there.”

Mr Morcombe admits trying to pin down “reliable” statistics around crimes against children is near impossible.

“With disclosure rates seeming to go up, you may be inclined to think the number of offences is on the rise, but it is most likely due to the confidence that victims have to find their voice and speak up,” he says.

“One of our biggest achievements is the Daniel Morcombe Child Safety Curriculum, where we teach Recognise, React and Report. It is the only child safety program used in Queensland and is always available to every state and territory in Australia.

“We would like to see a future where all children and young people are provided with education, protection and support to be safe from abuse and risk of harm.”

The Daniel Morcombe Foundation already has a host of age-appropriate child safety resources for children and young people that are designed specifically to prevent abuse and promote lifelong health and wellbeing.

There are resources for children with special needs and for First Nations families as well as educators, parents and carers. Through their Walk Tall program, they also directly support young victims of crime.

There is no doubt the Morcombes have met with countless people from all walks of life on their quest to give back to the community that have supported them from the day Daniel went missing.

Just a few weeks ago, Queensland Governor Paul de Jersey met with the Morcombes at Daniel House in Palmwoods to pass on his congratulations and tour the foundation’s new headquarters, which officially opened in February.

On the way home, a “bikie” gave them a friendly wave. Mr Morcombe says while these two men would obviously “live very different lives”, it goes to show the power of Daniel’s legacy and the support for the foundation.

But Mr Morcombe says they are, at the end of the day, “just Daniel’s mum and dad”.

“Denise and my story has captured Australia’s imagination over a lot of years and because we are very easy to contact, we have had a number of parents and families reach out to us over the years with family members or friends who have been victims involved in horrific crimes from violent sex offences through to murders and they seek guidance and support from us,” he says.

“We are not qualified counsellors, but we help them where we can and refer them onto other services. Likewise, survivors come in all forms. At every event, someone will come up to us to congratulate us on our work and suddenly, they can’t talk. It could be a big, burly man in his fifties and you can see his chin start to quiver and you just know.

“He might not share it with you, but you wonder ‘what happened to you?’ There are so many survivors that never spoke up and had that path forward in recovery because they thought they would not be believed.

What we are doing is making sure that the 10-year-olds we see don’t feel that way. That they know they can speak up and not hold onto that grief for the next 40 years.”

Mrs Morcombe says there is no doubt that her heart breaks when she hears the stories of loss and suffering of so many people around the country, but she also feels good that she can provide some level of support to those in need of it.

“I will never forget we were speaking with a woman in her eighties one day, who told us she was distraught that she had lost her son in difficult circumstances three years before. Her son was in his seventies and it made us realise that it doesn’t matter how old you are, if you lose a child at any age it is still beyond painful,” she says.

Mr Morcombe says while Daniel was abducted by someone unknown to the family, the “stereotypical stranger lurking in the shadows is no longer a reality”.

“The predators are in our homes every moment on social media and kids, in their quest to be popular and have the most friends, are welcoming them in,” he says.

“These predators, they appear as 13-year-olds with a pony, but the reality is very different and this adult male could be based in Sydney and be prepared to fly up to the Sunshine Coast to meet a child.”

In an interview with the ABC, psychologist and youth expert Dr Michael Carr-Greg says children under the age of 12 have no place being on social media.

He even went as far as to say they should be banned from the platforms because they do not have “the neurological maturity to manage their digital footprint”.

“I go to primary schools right across Australia and the principals are pulling their hair out because the parents aren’t enforcing this,” Dr Carr-Gregg says.

“You have got up to 60 per cent to 70 per cent of primary school kids on Facebook, Twitter, Instagram and Snapchat. We have to get that message through to parents, we have to educate them, and at the moment we are not doing enough.”

Mr Morcombe says parents and carers need to be more proactive than ever in educating their tweens and teens to only connect with people online that they know in real life.

“As the ones who pay the bills, adults also need to be exercising their right to see the photos being taken and shared [by their children], the friends they have on social media and the conversations they are having. It is so important. In fact, it’s a war and we need to make sure we do what we can to keep our kids safe,” he says.

“Apps do exist that allow you to hide things under a ‘skin’ like a calculator, so sneaky kids will still be sneaky, that’s been around since the caveman days when a girl would say she was going to a friend’s bonfire when she was really sneaking off in the other direction to be with a boy.

“But the repercussions are so much more severe now. What we can do is have those conversations, be proactive and teach our kids safety messages.”

At Day for Daniel, a series of Conversation Cards will be released by the Morcombe Foundation to help parents and carers bridge the gap and have open discussions with their children about child safety.

To access the Conversation Cards or any of the Daniel Morcombe Foundation’s resources, visit danielmorcombe.com.au.

10,000 child safety video views were recorded on Day for Daniel

Evolution of the Daniel Morcombe Foundation

I was fortunate enough to have the opportunity to take a tour with Mrs Morcombe through Daniel House, which was opened in February this year.

Nestled in gardens lovingly tended to by Mr Morcombe, Daniel House is located just outside Palmwoods and has become the permanent headquarters of the Daniel Morcombe Foundation and a place where children going through their Walk Tall program can meet with counsellors in a homely and private setting.

The building houses three counselling rooms, offices for the foundation’s seven staff, a boardroom, purpose-built sound room and the Morcombes’ office. It is a far cry from the home-based HQ they created in 2005.

“Daniel House has given us a vision for the next 20 years, which is enormous. For the past 15 years, we have only been able to plan from one fundraising event to the next,” Mr Morcombe says.

“The saying, ‘build it and they will come’ is true for us. We now have the ability to budget for the next three years and that has never happened before.”

They are still the only members of the foundation that go out to schools and are now in a position where they can review the requests that come in from around the country and plan which ones they will visit the following year.

2005 – The Daniel Morcombe Foundation was established and the inaugural Walk for Daniel was held, attracting 90 supporters.

2011 – Daniel’s predator was arrested and Daniel was brought home.

2012 – The Orbit Rescue sexual abuse prevention program was launched, including a game app for children.

2019 – Daniel House opened in February. In April, the Federal Government announced it would allocate $7 million to go towards a sex offenders list in Australia, called Daniel’s Law. In October, the sod was turned on the Build it for the Kids charity auction property, which is being constructed by Murphy Builders with help from 50 local businesses and trades on a lot in Harmony.

Continue Reading
You may also like...
Related Topics: Daniel Morcombe, Day for Daniel