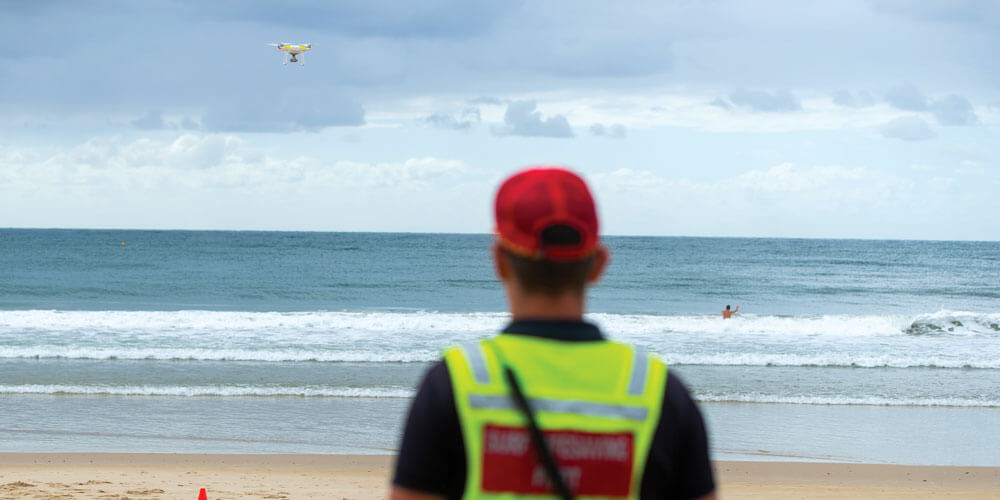 It was less than a decade ago that Australians could only dream of a future where drones could be used to deliver products, thwart criminals, save lives in the surf and replace fireworks with incredible synchronised light displays.

But the future is here and remotely piloted aircraft systems (RPASs) are fast becoming integrated into our way of life.

It is estimated that the world drone market will reach $127 billion by 2020 and the Civil Aviation Safety Authority (CASA) estimates there are more than 150,000 RPASs in Australia. A sophisticated drone registration and accreditation scheme being implemented this year will give clearer numbers in the near future.

“Remotely piloted aircraft represent a significant and growing component of Australia’s aviation sector and of CASA’s activity. The real expansion of drones was around 2012. Initially, drones required a lot of manual input to operate them, whereas current drones are highly automated and have more assistive systems – this makes them more accessible for all users. The pace of technological change in the RPAS sector means CASA must continue to adapt its more traditional approach to aviation safety.”

CASA has granted special permission to a number of businesses and organisations to allow them flexibility in RPAS regulations, which requires drones to remain at least 30 metres away from people.

In April, CASA granted Wing, which is run by Google’s overarching company Alphabet, permission to trial delivering products including burritos, coffee, gelato, chocolate, bread and medication from a dozen businesses by drone from the suburb of Mitchell, on the fringes of Canberra, to five surrounding suburbs for a year.

This comes after a successful year-long trial in Bonython, in south Canberra, where more than a thousand deliveries were made without a safety incident.

In addition, drones are being used by tech-savvy farmers to spray and monitor crops, by real estate agents to capture images of listed properties and by a growing number of people in the film industry.

“SLSQ has been testing drones for a number of years now, under various conditions and in different capacities,” he says. “The surveillance capabilities of these drones enables us to closely monitor any rips, currents, sand bars and tidal movements in the water and, of course, keep an eye on any swimmers who may have strayed outside of the flags or need our help.

“While drones won’t replace the need for surf lifesavers and lifeguards on the beach, they will definitely add significant value to our existing services. The added height they give us, along with that different perspective and viewpoint, means we can be a lot more effective and proactive with our surf patrols.”

The Queensland Police Service (QPS) has been using RPASs since 2013 and was Australia’s first law enforcement jurisdiction to do so. Acting Sergeant Rob Whittle says the fleet of RPASs has grown to 63 across the state, with 57 pilots trained to use them. “Since 2013, the QPS has conducted 972 drone flights, including 480 in 2018 and 367 in the first six months of 2019,” he says.

“The devices have helped improve outcomes by recording evidence quickly and accurately, as well as providing situational awareness at major incident scenes and assisting in some search and rescues.”

Acting Sergeant Whittle says drones were deployed in post-disaster relief in a bushfire disaster area in late 2018 to obtain aerial photos and video of destroyed areas behind the still burning fire front. “In November 2017, there was a deployment of RPASs to Mackay to assist in the investigation of an attempted murder of police officers by firearms,” he says. “The RPASs were used in support of forensic scene examination.

“The outcome demonstrated RPAS support was extremely beneficial in this instance due to the size of the scene spanning approximately 2.5 kilometres. Aerial video and still imagery of the entire scene was completed quickly, captured within one hour of flight time, compared to traditional methods, which would have taken at least one day, with investigators being able to view the entire footage of the scene in a very short space of time. Aerial images and video were used by forensics in the construction and overall interactive production for investigators and assistance to the court.”

Drones are also one of the essential tools being used for scientific research, with the University of the Sunshine Coast being the first tertiary institution in Australia to place drones in the hands of undergrads with the launch of the Mapping With Drones course.

“The technology has advanced so much, we are able to gain measurements down to centimetre readings, which is something we could never have imagined just five years ago,” he says.

“We can use thermal imaging equipment attached to drones to monitor wildlife, use overlapping photos taken by drones to reconstruct them into 3D structures and maps and what used to take a team of 10 people with extensive equipment up to a week to complete can now take two people a matter of half an hour.”

Dr Leon says drones are transforming our way of life and USC is looking at how it can harness the passion of recreational drone pilots to become data-collecting partners. “We will be surrounded by drones of different shapes and sizes – whether we like it or not, they are going to be everywhere,” he says.“Things like brain-controlled flying used to be sci-fi, but it has already been developed and is being tested. People are working on overcoming the main limitations such as battery life and how to apply drones to things like transporting people.”

Of course as with any technology, there are those who worry about the use of drones for military and surveillance applications, but Dr Leon says CASA is “at the forefront in the world on drone regulations”.

Mr Gumley says CASA has a number of rules to protect the general population in terms of aviation safety, such as not operating within 30 metres of people, not flying at night and not flying within 5.5 kilometres of a controlled aerodrome.

CASA issued 63 fines in 2018, with offences ranging from not flying within line of sight, flying at night and flying within 30 metres of people, costing between $1050 and $10,500. Among them was a $1050 fine imposed on a man who flew over an Ed Sheeran concert in Brisbane last year. Twenty-six fines have been issued so far this year.

According to the Australian Transport Safety Bureau, there have been no reported collisions with aircraft in Australia and as of 2017, there were fewer than five reported worldwide. Most reported incidents were near-misses above 300 metres – well above the 120-metre ceiling imposed by CASA.

There have, however been high profile incidents where drones have collided with land-based vehicles, including cars on the Sydney Harbour Bridge in late 2016.

Flying commercially or for economic gain is illegal unless you have your remote pilot licence or are flying in the sub-two kilogram category and Mr Gumley says drone pilots must operate their drones safely and in accordance with the relevant regulations that govern aircraft operations. “We recommend that operators do their research, visit droneflyer.gov.au to make sure they operate within the rules and download an app from casa.gov.au/droneapp,” he says.

Drone-delivering technology is already being trialled by Google’s overarching company, Alphabet, in Canberra. 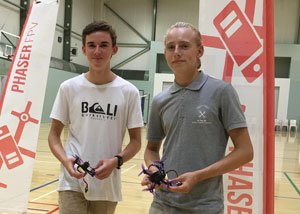 Forget training for years on end to gain enough skill to take on the Red Bull Air Race. Those who have the need for speed can start on a much smaller scale with Drone racing.

Sunshine Coast duo Eamon Kriz and Connor Middleton are at the forefront of drone racing in the region, founding Drone Camps late in 2018. Held several times a year, the camps are designed to teach aspiring drone racers how to build, fly and race a first-person view (FPV) drone at high speed around obstacle courses, giving pilots the sensation of being at the controls of a stunt aircraft.

Mr Middleton says at their second camp, which was held earlier this year, the Australian Army and Australian Army Drone Racing team facilitated the first day to look at real-life applications of emerging drone technology.

“There are not really any courses out there to teach drone racing and when I first started two years ago, I struggled to find information, so we decided to make one ourselves,” he says. “We have partnered with CQUniversity and people in our camps get to use the flight simulators on the Noosa campus so they can gain experience in flying before they try it with a real drone.

Mr Middleton’s passion for racing is matched by Drone Camps co-founder Mr Kriz’s business acumen. Mr Kriz founded his aerial photography business, In The Air, two years ago and is an accredited commercial RPAS pilot. Together, they hope to bring the Coast up to speed on the potential to be part of the fastest-growing new international sport.

Find out more at dronecamp.com.au.