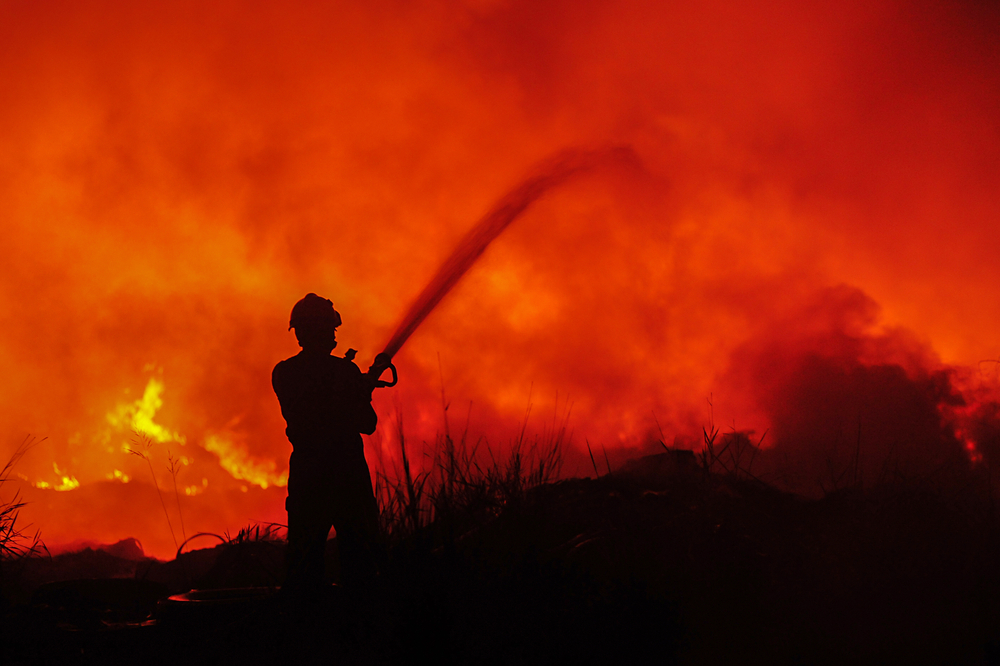 The official bushfire season has not yet started, but in the wake of a major weekend of wild fires on the Sunshine Coast, Caloundra Fire Station area commander Geoff Hunter encourages residents to be vigilant in preparing their homes.

The three days from August 18 to 20 were horrific for firefighters, starting with a “fire storm” burning through 700 hectares of bushland in Caloundra. Fortunately, no property was damaged and neither residents nor the 520 firefighters or emergency service personnel battling the blaze over the three days sustained any injuries.

However, August 19 was a much more devastating day, with three riverfront homes on Noosa River Drive razed to the ground by fire.

Later that afternoon, five caravans were destroyed by fire at a Kilcoy caravan park. Two of them were rented as permanent homes. The causes of both fires are still under investigation.

The community has quickly rallied behind these residents and Sir Richard Branson has offered the affected Noosa North Shore residents an opportunity to stay on his Makepeace Island, which is just across the river from their former homes, until they can begin to rebuild their lives.

Another fire at Peregian Springs forced the closure of the Sunshine Motorway from Murdering Creek Road to Yandina Coolum Road for five hours on August 20 after a fire flared up in an area that had been burnt out the day before and another bushfire was being closely monitored in Tewantin.

Hunter, who was also the incident controller at the August 18 Bells Creek fire, says the low fuel moisture content and high winds that billowed through the region created a tinderbox situation for the weekend’s blazes.

The Bells Creek fire started on the edge of the Bruce Highway south of the Caloundra turnoff and was fanned by a strong south-westerly towards Caloundra West.

Hunter says there were initially more than 180 urban and rural fire appliances with a total of 100 firefighters as well as SES volunteers, and Queensland Police Service officers on the ground and two helicopter crews water bombing from above at the peak of the blaze in the early evening.

“It was pretty hard work for all of the firefighters as it was very smoky and the wind created a lot of major spot fires. At one stage, I counted out seven in different areas. As soon as the embers were landing, they were igniting the grasses.

“As the fire moved from the highway, it created a firestorm with increased wind that I estimate was moving at about 50 knots.”
The fast-moving nature and intensity of the fire prompted an evacuation order for residents in and around Koala Court and Aura, as well as horses from the stables at the Sunshine Coast Turf Club and the nearby industrial estate.

Between 70 to 100 people sought refuge in the Lake Kawana Community Centre after it was temporarily transformed into a shelter.

Hunter says all of the emergency services, Sunshine Coast Council workers and State Government agencies worked together well and were able to effectively keep residents and property safe.

“If I said we were confident all the way through, it wouldn’t be true,” he says.

“We had to anticipate what might happen if we were not able to combat the fire. The teams were able to free up the area for movement for emergency services and we did not have to worry about having to perform rescues during the height of the intense fire as residents had moved to safety.”

Hunter says continued dry conditions mean the potential for a long bushfire season for the region this year.

A free Bushfire Preparedness Community Information Session by the SEQ Fire and Biodiversity Consortium is being held at Unity College on September 5 at 5.30pm.