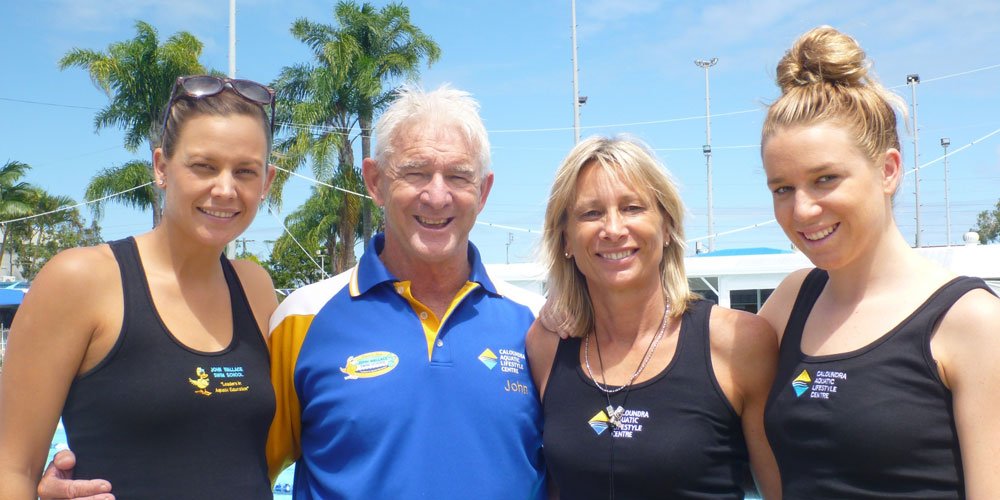 A prominent Caloundra aquatic educator is preparing to retire after almost four decades of teaching vital swim skills to hundreds of young children.

John Wallace took up the lease of the Caloundra Aquatic Lifestyle Centre 37 years ago and it has been a real family affair ever since, with Mr Wallace working alongside his wife Vicki and daughters Kirsty and Tessa, who was an Olympic swimmer.

He says the time has now come to retire, but it is not without many mixed emotions.

“I’ve been a part of the Caloundra swimming community since 1985,” Mr Wallace says. “So, it really is an end of an era.

“My wife and I used to live on site at the caretaker’s house up until 2002. We had our daughters there. When we first started at Caloundra, it was just a 25-metre pool and a toilet block.

“I’m going to really miss it. I’ve lived and breathed swimming for as long as I can remember, but it’s time to stop and smell the roses, travel and explore retirement.”

Having trained under the tutelage of Laurie Lawrence, John Carew and Roy Holland, Mr Wallace developed a reputation of his own for leading swim school programs.

“Laurie’s passion really rubbed off on me,” Mr Wallace says.

“When I started at Caloundra, I quickly rallied the support of local primary schools to start teaching kids to swim as early as possible.

“The schools trialled the service and loved it, so we purpose built an early-years learn-to-swim facility at the centre with council support. It was revolutionary at the time.”

Mr Wallace also went on to coach Olympic and Paralympic swimmers including Kaylee McKeown, Nicole Irving and Jeff Hardy, even guiding his own daughter Tessa to the 2010 and 2018 Commonwealth Games and the 2012 Olympics.

His legacy also lives on with daughter Kirsty, who runs the popular aquatic facility at nearby Baringa.

While Mr Wallace says there have been too many highlights over the years to count, he admits the past two years have been difficult on the local swim school, particularly in its ability to maintain qualified swim coaches.

“I really wanted to leave on top, but like many businesses, COVID restrictions have impacted our workforce and our ability to maintain qualified swim coaches,” he says.

“I’ve had to wind back our swim school, which is really unfortunate.

“Good staff are hard to come by – you need to lock them up.”

Caloundra Aquatic Lifestyle Centre is one of nine Sunshine Coast Council-run aquatic centres across the region.

With Mr Wallace’s lease to finish on May 31, the council will then deliver essential capital works on the facility ahead of a new lessee taking over in July.

Shining a light
Stranger than fiction