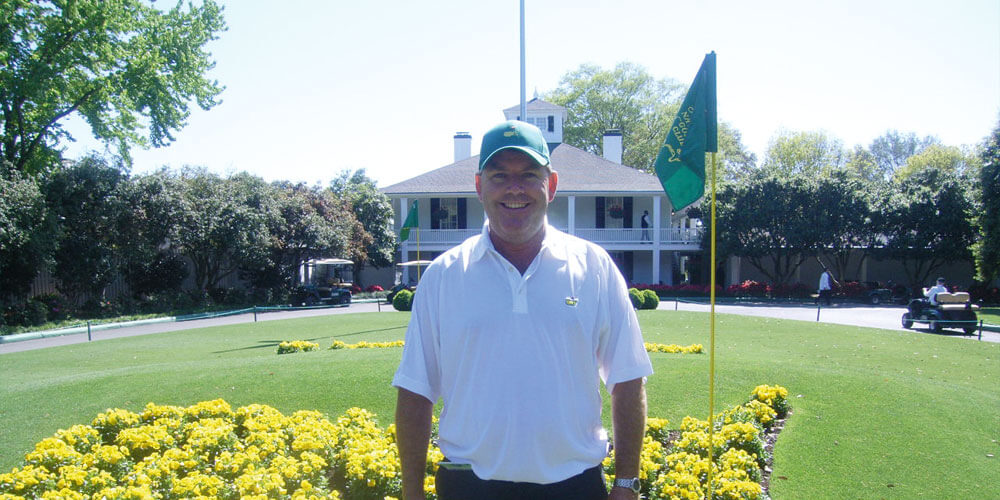 If you ask Steve Hutchison, golf is the essence of life. He’s loved the game since he first started playing at the age of 13 and you can hear the excitement in his voice as he talks about his impending trip to the US Masters at the Augusta National Golf Club in the southern state of Georgia.

“Of all the majors, that’s my favourite,” he says. “I’ve got people asking me to bring them back souvenirs so they can say they know someone who’s been there. I’ve got to buy souvenirs for people who know their grandfather’s birthday is coming up – a ball marker or a tie.

“Every hole looks like a piece of artwork,” he marvels. “The silence of 40,000 people when someone hits the ball is unbelievable. It’s totally silent in that area, not a train goes past, there are no planes flying over. They’re the kinds of things you notice that you might not notice anywhere else.”

A professional golfer for 10 years until 1991, Mr Hutchison spent a number of years coaching before he became director of golf at Twin Waters Golf Club in 2001. In 2005 he was appointed manager and under his guidance, the club has won multiple awards.

In 2017 he won the QLD PGA Manager of the Year and subsequently beat managers from around the country to win the National Manager of the Year, the first time the award had been given. The club also picked up two awards at the Queensland Industry Golf Awards on March 20.

Not surprisingly, Mr Hutchison lives and breathes golf and reckons he has the best job in the world.

“I don’t want to do anything else. I definitely have the best manager’s job in Australia, that’s for sure. I don’t have the committee governance – there is one person who is the owner of the club. Some clubs might have up to 10 or 15 different committees they have to manage. My owner’s objective is: make it successful. He certainly cares about his members and looks after them.”

Through his association with the club, Mr Hutchison has become good mates with legendary golf pro Ian Baker-Finch, a Twin Waters Golf Club member who, as a previous US Masters competitor, is invited back to the event each year and is permitted to invite guests.

“I was able to get some access and tickets from him that most people can’t,” he says. “It’s the most elusive ticket in sport. People who attend are called patrons, not spectators. The only way to get a patron’s ticket is to be on the list and it’s the same people who get the same tickets every year.

“It’s different to any other tournament. Rules apply there that don’t apply anywhere else. Unruly behaviour will see you ejected, and that includes shouting or running. If you run up the fairway to see the next shot and get a better vantage point, you’ll be kicked out. The person who supplies the tickets are responsible for them, so if I did something wrong, then those tickets assigned to Ian would be taken and there’s a possibility he wouldn’t be allowed to come back. Nobody breaks the rules because they always want to come back.

“They have an unusual procedure to watch the golf tournament. You have to buy their specific chairs at the club. It’s like a picnic chair. If you put that chair down at the 17th hole, for example, you can leave it there all day, go for a walk and come back and sit in it at any stage. That’s your chair. I’ve never seen that at any other sporting event. It’s very unusual but I’ve seen it at work and it’s amazing.”

Tall pine trees, signature azalea blooms and a cooler climate mean there’s little about Augusta that compares to golf courses on the Sunshine Coast. Locals watching on TV will notice the absence of advertising on the stunning course.

“The undulation is something that doesn’t get seen much on television,” he says. “The undulation on the 10th hole at Augusta would be like playing from the clubhouse at Headland Golf Club to the 10th green – it’s a long steep hill. When people get to Augusta, they say they didn’t realise how undulating it was.”

Sticklers for tradition, the owners of the club haven’t increased food prices since 1979, so while a can of beer at the Super Bowl is $US17, a beer at Augusta is less than $US4 and the club’s famous pimento sandwich is just $US1.50 ($1.95).

“It’s about upholding the traditions of golf,” says Mr Hutchison. “That’s how it’s always been.

“I love the solidarity of golf, the integrity the self-determination, the discipline. You can’t rely on anyone else in golf. It teaches you a lot of life lessons. Young people have to learn the etiquette of golf and show respect. They get interaction with old people immediately and learn life lessons like honesty and discipline. You govern the rules yourself and there’s a good life lesson in that for all of us.”

And his prediction for this year’s Masters?

“There are probably 30 people who could win but I predict it will be Rory Mcllroy.”

Australian Industry Trade College launch
What is the value of public art?