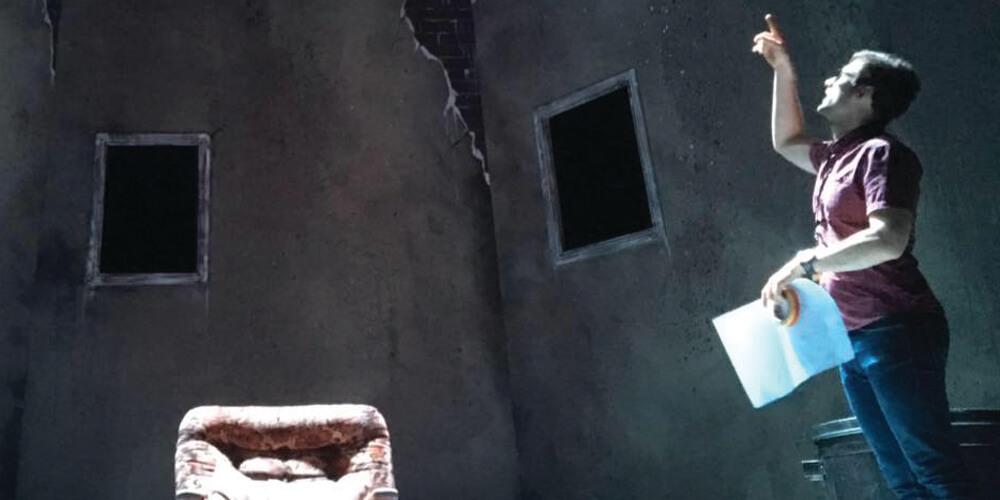 The four students who secured the coveted mentoring opportunity with the support of the Sunshine Coast Council are Riette de Jager, James Sutton, Georgia Toner and Matilda Storey, who is just 16 years old.

They will observe Glenwright’s process from the start of the production conception through to opening night.

“I am asking them to create the lighting documents as if they were in the position of lighting this production of Julius Caesar. I feel it’s a great way for them to be involved in the process. A lighting designer needs to produce for productions as well as discover their own creative solutions and design techniques. We will then compare their documents with the solutions I come up with for the production,” he tells My Weekly Preview.

“The most exciting part is all of us will come up with different ideas of lighting the show and if they bring some ideas that are close to my design concept, I will no doubt include those ideas into the show design. I am very adamant to point out there are no right or wrong solutions when it comes to creativity as long as they can be justified.”

Glenwright says he will encourage the students to pitch in and “get their hands dirty” to gain valuable experience they can use for their future careers.

“When you first start out, you have to do a lot of your own rigging and plotting so the more hands on experience you can get, the better. I learnt the most as a young designer working as a lighting technician alongside more experienced designers.”

Glenwright says he always noticed theatre lighting from a young age and when he got to high school, he was quick to join the school theatre’s technical team.

“My interest just exploded from there,” he says.

“It’s so hard to pin down my first job in the field as I did so many little projects whilst I was studying at university, but you could call my first professional production The Kursk, which was a small independently produced show in Brisbane. I was still at uni at the time and director Michael Futcher entrusted me to light it after we first worked together on a QUT show earlier in the year.

“The venue had very little equipment and no budget to hire anything extra so it taught me limitations alongside bold design parameters can still breed creativity. The show ending up being so successful, a few years later it went on to tour across Australia for six months.”

Glenwright has worked on more than 200 shows since then and his latest, Julius Caesar, is directed by Jo Loth, the head of drama at the University of the Sunshine Coast.

Through a dynamic and brutal portrayal, this rendition of William Shakespeare’s classic is set in the twenty-first century in a time of political megalomania and media frenzy.

Loth says it is amazing that Shakespeare’s words hold striking relevance and are completely relevant to the landscape.

The cast features the leading lights of Sunshine Coast theatre including Rainee Skinner, Mary Eggleston and Angel Kosch, who, in defiance of gender norms, will be playing Mark Antony, Cassius and Brutus respectively.

Julius Caesar is on at The Events Centre, Caloundra on August 12 and August 19 at 7.30pm, August 17 at 11am and 6.30pm. Tickets are $35 and concessions, students and children aged two to 17 are $25. Tickets are available at theeventscentre.com.au.

Continue Reading
You may also like...
Related Topics: Events

That gut feeling: why it’s the key to better health
History: The tale of David Low