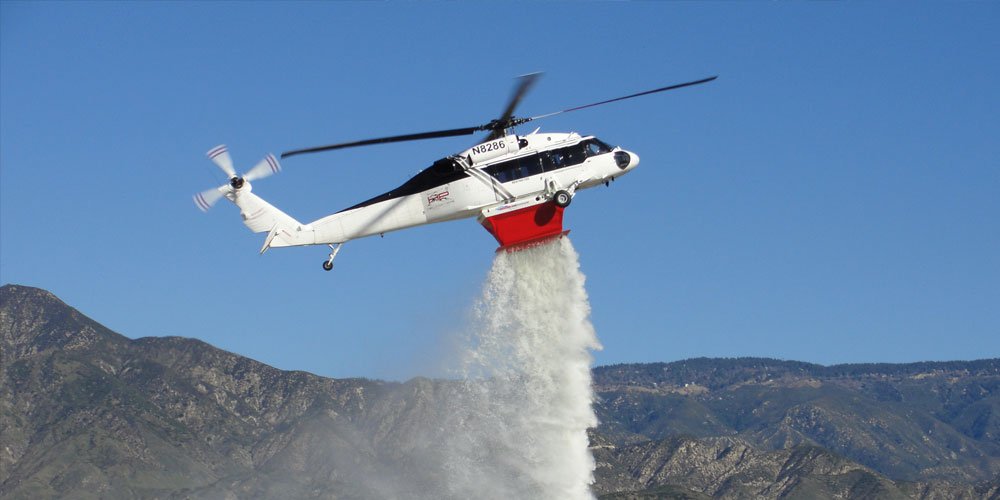 When a fire was deliberately lit in Noosa last Wednesday, the outcome could not have been better. As a group of 80 stakeholders gathered at Noosa Aerodrome, they witnessed a revolutionary firefighting detection and response system in action that could put an end to catastrophic fires both here and overseas. And the best part? All three companies involved in the demonstration, streamed around the world, are from the Sunshine Coast.

Space intelligence company Fireball International from Peregian, Helitak Firefighting Equipment from Noosaville and McDermott Aviation from Cooroy joined forces to show the world just how fast they can detect a fire and extinguish it.

“It was not a fire day; it was raining and cloudy and our system still picked it up within three minutes,” says Fireball’s CEO and managing director, Christopher Tylor.

“We had temporary cameras installed in Mount Tinbeerwah and Marcus Beach. The fire was lit, and we would usually pick it up within a minute, but it was a very cold, small fire lit on barbecue coals inside a 44-gallon drum and covered with a hay bale on top. The wind was blowing, and the smoke was not really visible but both cameras picked up the fire.

“All the stakeholders were utterly impressed. You have to put it in perspective. Now we have demonstrated a system that can pick up a fire in a minute and with the resources already available to them on the Sunshine Coast, we can attack the fire when it is still small, which massively reduces the power of the fire to get big. The key is early detection and early attack.”

The resources he’s referring to are Helitak’s expandable water tanks, which can drop multiple loads of water on a fire in a short space of time combined with McDermott Aviation’s helicopters.

Currently, bushfires in Queensland are primarily detected when a member of the public calls Triple Zero (000). According to a Queensland Fire and Emergency Services spokesperson, the vast majority of all bushfire notifications that QFES receives are either via Triple Zero calls or direct calls to QFES’ Fire Communication Centres.

“QFES is aware of a number of companies developing early fire-detection systems and appreciates that early detection is a very useful tool for the suppression of bushfires,” the spokesperson says.

“It is important to note, however, that improved detection times do not necessarily lead to significant improvements in the arrival time of resources, considering the vast expanse of Queensland.

“QFES is constantly looking to refine and improve future operations, and while there have been significant improvements made in new and innovative fire-related software and systems, careful consideration must always be given to any emerging technology to ensure that it positively impacts the delivery of emergency services.”

Mr Tylor says, “We haven’t seen anything yet in regard to fires and it will be imperative to detect fires early in order to put them out quickly. Right now, we can’t do that, because we are relying on humans to pick up the phone and call.”

According to CSIRO research, fires can grow by 300 per cent within the first two hours of ignition and every 10-minute delay in detecting a fire can result in it spreading by 1500 square metres.

Fireball circumvents the need to rely on Triple Zero calls by taking supernova research and flipping it upside down to detect fires on the ground instead of exploding stars in space. The technology was originally developed by University of Southern Queensland Adjunct Professor Carl Pennypacker, a hero of Mr Tylor’s when he studied his PhD in astrophysics.

Based at the Peregian Digital Hub, the company is run by a team of 16 scientists and professionals in the fields of astrophysics, biology, data science, fire ecology and mathematics. Its real-time satellite images, ground cameras, sensors and artificial intelligence can find bushfires within minutes.

The company has secured several US western state contracts to monitor about 50 million hectares for wildfires and in the 2020 California fire season, detected more than 850 fires.

“I think 65 per cent of all the fires we detect within a minute. And I think it’s 95 within five minutes and 100 per cent within 10 minutes,” Mr Tylor says.

“Our big goal is to have the system rolled out globally. We want to be the go-to place in regard to fire intelligence and that is what we will achieve. In the next five years, we will have international installations all over the planet. The challenge we have is to commercialise it and convince potential customers that it’s worth it.” 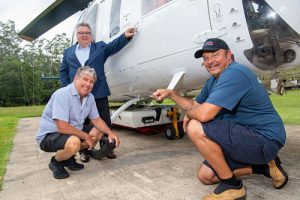 Back to front: Christopher Tylor, John McDermott and Jason Schellaars

Helitak Firefighting Equipment has been operating since 2006. The first commercial Helitak Fire Tank was exported to the US and the product was officially launched at the HIA Heli Expo in 2007. The Helitak Fire Tank was also featured on the ABC’s New Inventors show in 2009. The tank design was the winner and also collected the people’s choice award.

“We’ve been going through this for 15 years and we’re all getting a bit jack of it,” says Helitak CEO and chief engineer, Jason Schellaars. “We have another Royal Commission – let’s get all these things started. You see all these startup companies with glossy brochures – hey, we’re doing this already. There’s no need to invent the wheel.

“What we wanted to take out of the demonstration on Wednesday was that all this technology and equipment has been developed. We design and manufacture it here on the Sunshine Coast. We’re ready to rock ‘n’ roll and have been for years.

“A large air tanker carries 15,000 litres of water in comparison to our smallest tank, which carries 1200 litres of water but can put more water per hour on the ground because we can refill it every three minutes. We can put more water, more accurately on the fire. Our smallest tank costs about 14 cents per litre to deliver to the fire and the largest aircraft costs about $2.14.

“We don’t want to wait until the fire goes pear-shaped. The focus of what we, Fireball and McDermott are doing is about initial detection and initial attack aircraft. The best way to hit a fire is hard and fast early, not on day three with a large air tanker.”

Helitak has five customers in Australia, including McDermott Aviation and six overseas, predominantly in the US and Canada.

“We have the most controllable fire-fighting tank on the market with the most efficient drop pattern,” he says. “We’re still only in the early stages on the world market.”

“Our tank-fitted helicopters offer speed and manoeuvrability for an initial attack on a fire,” Mr McDermott says. “In terms of delivering maximum, continuous water and dropping it accurately onto a fire, our helicopter and tank systems shine when compared to large air tankers, which carry larger volumes but have much longer turnaround periods and less accuracy for urban interface interaction.

“The combination of the use of helicopters with the Helitak expandable bladder and the cameras that Fireball International have developed, that have been fitted to the bottom of the helicopters, ensures we nail the delivery of water every single time – ensuring time and water are not wasted when there is no time or water to waste.”

Federal Member for Wide Bay and Deputy Speaker of the House of Representatives Llew O’Brien says the Liberal-National government is supporting the innovation with a $497,500 Accelerating Commercialisation grant for Helitak, and a $500,000 Entrepreneurs’ Program grant for Fireball International.

“The technology being developed at the Peregian Digital Hub and the collaboration with Helitak and McDermott Aviation is an absolute game-changer for detecting and fighting bushfires, and it will benefit not just Australian communities, but has the potential to be used all over the globe,” Mr O’Brien says.

A State of Fire Emergency is a vital declaration that works to prevent bushfires breaking out and posing a danger to lives and property. The declaration prohibits the lighting of all types of outdoor fires and bans certain activities that can cause fires to ignite. The QFES Commissioner, with the approval of the Fire and Emergency Services Minister, can declare a State of Fire Emergency.

There is no fixed criteria for invoking the declaration, rather multiple factors are considered before formalising the declaration, including the number of active fires and fire weather conditions (drought, wind speed, relative humidity and temperature). Queensland’s recent State of Fire Emergency was issued on November 9, 2019 at 5pm, as several parts of the state were experiencing severe fire danger rating conditions.

The state of Queensland has a legislative responsibility for firefighting in Queensland. The federal government assists the state when requested by co-ordinating resource sharing arrangements and financial support.