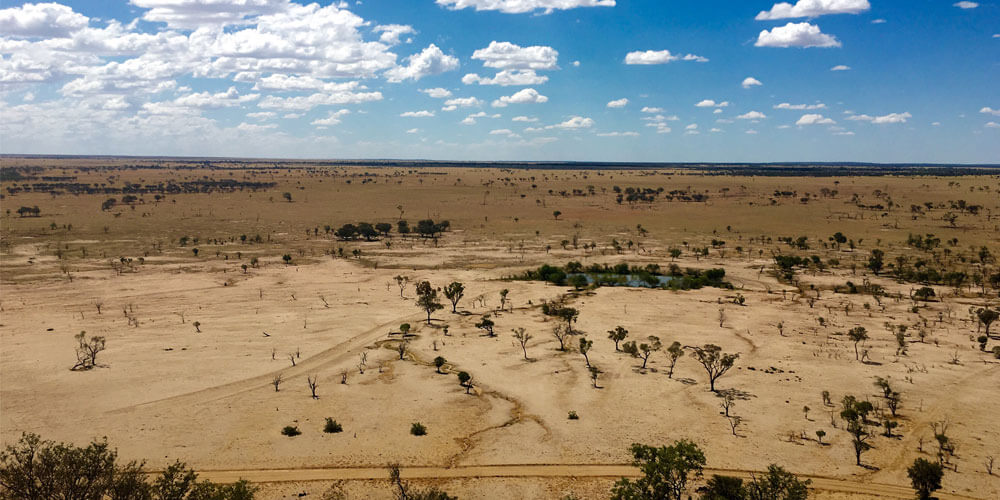 Drought is ravaging our country like a cancer, slowly but surely eating away at the industry that is our country’s lifeblood.

Drought-stricken farmers across Queensland and New South Wales are battling the biggest dry spell in living memory and these resilient men and women are at breaking point.

In a good year, our farmers produce enough food for thousands of Australians.  This year they are struggling to feed their own families.

They are bankrupt – the 2017 Queensland Rural Debt Survey indicates that Queensland farmers are more than $17.2 billion in debt. Stockfeed availability is at an all-time low and subsequently an all-time high price.

Chinchilla-based charity worker Tash Johnston says it can cost anywhere from $10,000 to $15,000 to purchase a truckload of hay, which can feed cattle and sheep from up to a couple of days to a couple of weeks at the most.

As the co-founder of Drought Angels, Mrs Johnston has been on the ground battling the devastation for the past four-and-a-half years, raising much-needed funds to offer financial support to thousands of families.

“We have grown men on the phone in tears, they don’t know what to do,” she tells My Weekly Preview.

“They are doing their best to keep the stock alive. There is a massive shortage and something has to be done. So many winter crops particularly in the Darling Downs region have failed because of no rain. These crops make our flour, our stockfeed. It effects every single one of us Australians.

But push has come to shove. Thousands of heads of cattle and sheep, who have escaped the deadly claws of malnutrition, are now being slaughtered by devastated farmers. It’s cheaper to kill the stock than continue to farm.

Animal bones litter the rain-deprived soil, which has cracks so wide that “you could almost lose a small child”, in Mrs Johnston’s words.

It is a world away from the beauty of the Sunshine Coast. Here we celebrate our weather – the sunshine, the clear blue skies.

But as we stroll along the pretty beaches and enjoy the sounds of crashing waves, spare a thought for our farmers whose lives are crashing down around them.

According to Queensland Government figures, almost 60 per cent of our state is drought declared, taking in the Toowoomba region, Southern Downs, Lockyer Valley and the majority of western Queensland.

Ninety per cent of New South Wales is affected. According to the Bureau of Meteorology, Australia has experienced its fourth-warmest autumn since records began in 1900 and rainfall was below average for most of the country. These dry conditions are expected to continue in Queensland into next year.

The Federal Government has stepped up to the challenge and on Sunday announced a $190-million drought relief package.

Producers eligible for the Farm Household Allowance will be given relief of up to $12,000 for couples and $7200  for singles.

“You put the food on our tables, the fibre that goes on our backs and we have your back,” Mr Turnbull said.

Eligible farmers will receive the first payment on September 1, with another round of funding in March 2019.

The Federal Government has now spent $576 million on relief for this drought.

Meanwhile, the New South Wales government has been celebrated for coughing up a $1-billion package for their farmers, but at the time of writing, Queensland was yet to match the effort.

In June, our government announced it would continue to maintain its existing relief arrangements with up to $34.6 million in 2018–19 for the whole-of-government Drought Assistance Package, up to $20 million of which will be available under the Drought Relief Assistance Scheme.

“The governments need to take a long hard look at all the policies and procedures for our farmers. They can subsidise things for our farmers… they are the backbone of our country,” she says.

“The Australian people have done more.”

Big businesses and community groups are throwing their weight behind the issue.

Last week Coles pledged to provide $5 million in grants and launched a fundraising appeal in more than 800 supermarkets.

Commonwealth Bank has donated $2 million to help farmers and also announced it would not apply default interest rates on business term loans for customers experiencing difficulties from the drought.

Locally, Sunshine Coast-based group Higgins Storm Chasing (HSC) has been a mouthpiece for farmers, working with the community to raise funds for Drought Angels. In the two weeks since launching the HSC Drought Appeal, almost $500,000 has been donated to the cause.

They are encouraging schools to hold a gold coin donation day and have also launched a fundraising auction through the HSC Facebook page.

“Being in the city myself, I go to the supermarket, buy meat and come home to green grass,’’ Mr Hinterdorfer says.

“That’s how a lot of people are; it’s been a hidden crisis for so long. People were ignoring it. Get on board and support this.”

Mrs Johnston says financial support is a necessity, but agrees those living in regional and metropolitan Queensland can do more.

“As a nation, we don’t value them (farmers) enough. It’s our food bowl and who’s going to feed us?

“I encourage people to shop at IGA or independently-owned and family-owned stores. Buy Australian. When you are shopping, and I understand people are hurting everywhere, buy three or four items a week… that are Australian made and grown.

“Let’s go back to shopping at the fruit market and local butcher. You know where it comes from, it’s Australian and hasn’t been sitting in a shed in the US for the last six months. We have to be more aware.

“We are at risk of losing our farmers and eating imported food only. We need to act, and we need to act now.

“I had a couple of men just this week in tears saying they don’t know what to do or who to turn to. It’s hard for these people to reach out and ask for help. We want them to ask for help rather than pull a trigger or tie a noose.”

The Australian Government has announced $11.4 million in funding to support the mental health of farmers and their families. Instead of three out of 10 Medicare-supported psychological consultations needing to be in person, all of them will now be able to held over the phone or through Skype under the changes. “These are bleak times and a lot of people find it very hard to cope,’’ Prime Minister Malcolm Turnbull told AAP.

“I have seen such farmers publicly open up on social media over the few months asking us to share their situation and campaign on their behalf for the government to give them greater financial assistance.  “Their words are true words of desperation and hopelessness in the hope that people around Australia would come to the realisation that their plight is desperate.”

Ms Atherton says while financial support is vital, so too is emotional support. “Everyone needs to know that they are not alone in their time of suffering.

“What the community can do is share the plight of farmers on Facebook and on whatever platform they can and continue to get the word out that they need support.

“Ideally, to create as many support networks as possible whether that be financial, such as teams like Drought Angels.

“No matter how small we may think our contribution is, when we join it all together it turns into something huge.

“Continuing to petition the government to create more funding to support them financially would be a very big step.”

Charities and events all in a day’s work for Min Swan
Ten years: looking back