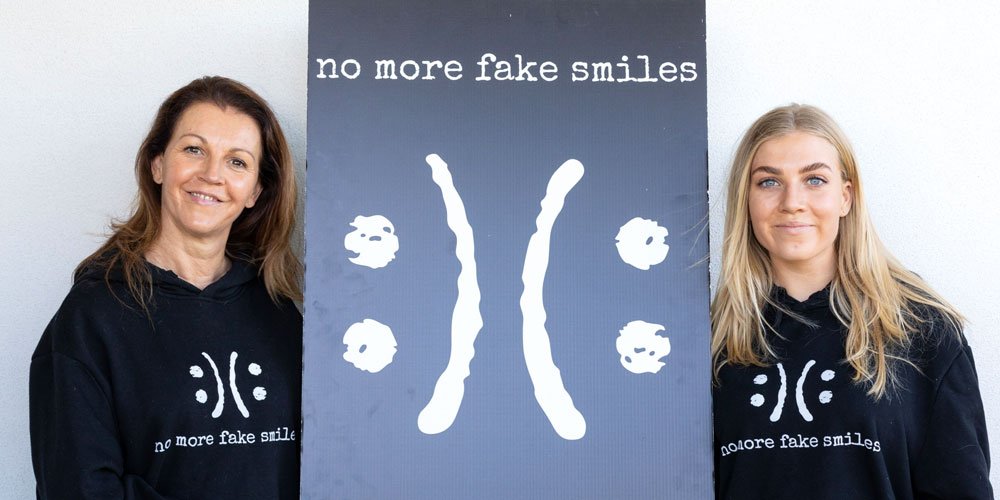 Tracey Morris knows all too well the immeasurable pain that ripples around a family impacted by the sexual abuse of a child.

The Sunshine Coast mother of four’s life changed forever when her eldest daughter, Annie Jones, disclosed she was being sexually abused by her stepfather.

Annie was 15 years old and Tracey had been married to her husband for 10 years. Despite there being no obvious red flags, Tracey innately believed her daughter and did not hesitate to throw her husband out of their Sydney home and seek help. It is an outcome that is not as common as you would think.

With 80 per cent of sexual abuse perpetrators known to the children they are abusing, there is often a complicated array of emotional and financial circumstances that prevent people from reporting the abuse.

Realising this during the incredibly challenging and taxing three-year criminal case that saw Annie’s abuser sentenced to more than 17 years in jail, Tracey and her daughter joined forces to found No More Fake Smiles.

The name of the registered charity was derived from Annie’s lived experience of plastering on a fake smile every day during the two years she was abused by her step-father, covering up her pain and suffering from everyone, including the rest of the family living under the same roof.

No More Fake Smiles aims to give a voice to child victims of sexual abuse and empower them to speak out and report, while also removing the stigma around child abuse in our society.

The charity provides therapy, support and healing for victims of child sexual abuse and their families, who often are overlooked by existing organisations.

“The abuse may have happened to Annie, but myself and her siblings have all gone through three years of counselling alongside her to deal with the trauma that was inflicted by just one person’s selfish actions,” Tracey says.

“We know how important it is for the primary caregiver to also be supported as they need the strength to be able to support their child through a legal process that is heavily focused on the offender and not on the child.”

Tracey says they are working to increase their capacity to assist those who are reaching out for help. In the first week of the charity’s official launch in September 2019, around 380 young people across the nation reached out to share their experience of abuse, with some disclosing for the first time after being inspired and empowered by seeing Annie’s story.

Demand for support services continues to increase, with the latest Australian Bureau of Statistics, released on July 9, 2020, showing our nation has experienced eight consecutive years of growth in the number of reported child sexual abuse cases.

“It is a pandemic of a very different kind that has gone unnoticed within our society for far too long,” Tracey says. “Even though the numbers are growing, child sexual abuse is one of the most under-reported crimes.

Tracey adds that even if the case makes it to court a conviction is unlikely with “only one per cent of cases resulting in the offender serving a jail sentence. These kids need our help now more than ever.”

The Reported Victims of Crime ABS statistics show in 2019, 2352 young women aged 19 and under reported sexual abuse in Queensland, compared with 481 young men in the same age bracket. Of these, 616 cases were victims aged nine years or younger.

Last year, there were 14,760 reported sexual abuse cases of children aged 19 years and younger around Australia and as many as one in five cases reported to police in Queensland are deemed as “unfounded” and rejected due to lack of evidence or an inability to get the child victim to give a statement against the perpetrator.

Police statistics have revealed the Sunshine Coast Council area is among one of the three areas nationally with the highest “unfounded” rates, with 25 per cent of sexual assaults reported to police being rejected in the 10 years to 2018 due to lack of evidence to prosecute.

With Child Protection Week running from September 6 to 12, No More Fake Smiles is launching a national campaign to raise awareness as well as $700,000 in seven days to provide support to 700 child victims of sexual abuse.

With the organisation’s major annual fundraiser being cancelled due to Covid-19 restrictions, No More Fake Smiles has shifted its focus online. Every cent raised will go to the No More Fake Smiles Mental Health Program, which assists both primary and secondary victims of child sexual abuse access to appropriate recovery therapies, including traditional counselling, art therapy and equine therapy.

“We believe people need to connect with their therapy and this is best achieved through choice of programs and therapists,” Tracey says.

“Therapy is not a one size fits all and there are so many options available. We assist victims to source the best therapy for their healing process. It costs $500 to provide a course of therapy for one child, but every cent counts towards us reaching our goal.

“The more we raise, the more victims we can help on their healing journey, so they can go on to live happy and fulfilling lives, free from the trauma that comes from being a victim of child sexual abuse.”

2833 of those cases were in Queensland.

25 per cent of child sexual assault reports on the Sunshine Coast were rejected in the 10 years to 2018.

Only one per cent of child sexual abuse court cases result in a jail sentence.

There are three main ways to support the campaign:

Local mumpreneurs need your votes
A vital role in our community