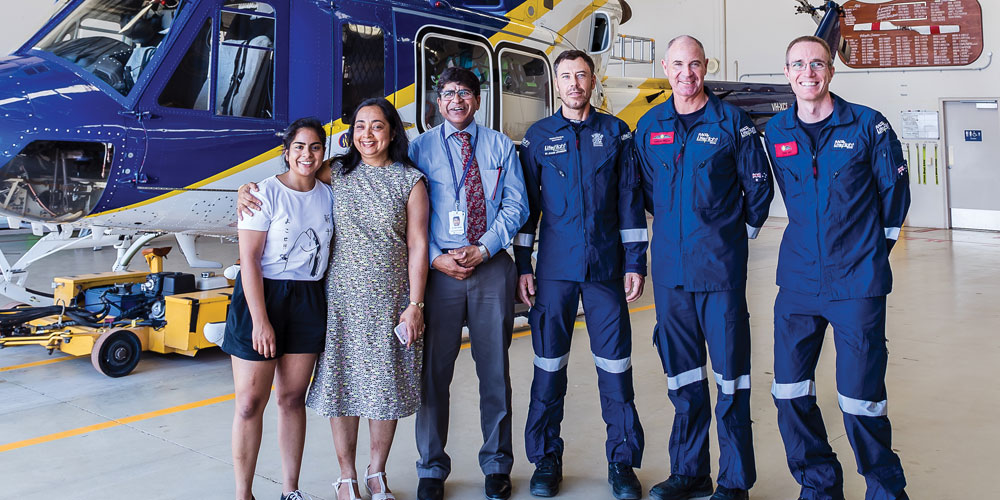 For four decades, there has been a team of superheroes that fly to the rescue of people of all ages across the Coast and beyond with just a moment’s notice.

These heroes don’t wear capes, but they save lives every single day as they fly into hazardous conditions, deploy winch rescue professionals and provide world-class medical care while airborne on route to the nearest hospital.

They are the RACQ LifeFlight Rescue helicopter service.

The Sunshine Coast-based aeromedical team performed 450 missions last financial year at a cost of $5.6 million, making it one of the busiest bases in RACQ LifeFlight Rescue’s fleet.

What began as a single aircraft in 1979 has grown into eight bases, 10 helicopters, three air ambulance jets and more than 400 medical, aircrew and support staff that have saved more than 50,000 lives.

Among them is Sunshine Coast doctor Ajay Verma.

The Buderim Private Hospital Medical Centre doctor often works at the Sunshine Coast University Hospital (SCUH) and can see the helipad used by the LifeFlight Rescue helicopter service from the room where he works. But he never imagined that one day he would be one of the people being flown in for emergency care.

On December 31 last year, the 55-year-old experienced the world-class care LifeFlight provides and says he would not be alive today if it wasn’t for their help.

The Brightwater resident and his wife and two daughters were at Rainbow Beach sightseeing with his sister, brother-in-law and their two children, who were visiting from Mumbai in India.

After playing beach cricket, his nephews, aged 11 and 14, decided to go for a swim under the watchful eyes of their parents while Dr Verma went to the car.

On his return, he saw his youngest nephew was in trouble, being dragged out into deeper water in a rip.

“My instant reaction was that if I didn’t do anything, he’s going to drown. So I went in to catch hold of him and he grabbed my upper shoulders and suddenly we had a wave on top of us,” Dr Verma recalled.

“He was above me and I was pushed to the seafloor because he was panicking and he wouldn’t leave me. I managed to give him a big push and he went to the shore and then I was stuck in the rip.

“I remember I lost consciousness briefly and after a certain amount of time, I found somebody pulling me out of the water onto their surfboard to get me onto the beach.”

Dr Verma’s wife Deepika Bhat, who is also doctor, worked with surf lifesavers to stabilise him while the ambulance arrived.

The situation was critical, with Mr Verma vomiting, going in and out of consciousness and recording a blood oxygen saturation at a dangerously low 70 per cent with a worryingly low pulse.

“I’d say in nine out of 10 of our retrievals, the Queensland Ambulance Service beats us to the patient and they do the first assessment as in this case,” Dr Johansson says.

“With a blood saturation content of 70 per cent, Ajay was critical and his lips were blue. If he dropped any lower, he would be unconscious, so this was a close call.

“The ambulance did what they could to administer oxygen, but they don’t have a ventilator, which we have in our chopper. We decided to use our ventilator to induce positive pressure on the lungs, which were wet from swallowing the salt water.

“We were able to bring his [oxygen] saturation up to 90 per cent, which made me feel more comfortable and then we took off to land 15 to 20 minutes later on top of the SCUH.”

Although Dr Verma had to spend 48 hours in the intensive care unit at hospital and went through treatment for pneumonia, a four-week X-ray revealed everything had cleared and he was back to life as normal.

“My situation was a matter of life and death. I have a new lease on life and I can’t thank them enough for what they have done for me and my family,” he says.

“It was a different experience to be on the other side of the fence; to be a patient.

“Everyone from the surf lifesavers to the ambulance service and LifeFlight are incredible organisations.

“It is important that the wider community do whatever they can to keep their services going so they can continue to give treatment and carry out rescue operations through to the next generation.”

Sunshine Coast lawyer Travis Schultz is a member of the LifeFlight Foundation Board, the community-based organisation that funds and supports the emergency aeromedical services of LifeFlight Australia.

Mr Schultz says he’d only had “fairly fleeting encounters” with the organisation before taking a seat at the board table.

“Like many Sunshine Coasters, I’d enjoyed their events and the hospitality on offer, but I’d never had an opportunity to look under the bonnet, so to speak, and gain a true understanding of the lifesaving team at RACQ LifeFlight Rescue and what they do on a day-to-day basis,” he says.

“LifeFlight is a community service which provides search and rescue for both ocean and bushland missions.

“Our helicopter crews can perform water winch rescues for beach and ocean emergencies, as well as land winching to extract patients from difficult terrain, such as the Glass House Mountains.

“The hinterland communities are widespread and can be remote, so it’s often a lengthy road trip to hospital by ambulance.

“Our helicopters have a medical team on board, which includes a critical care doctor and flight paramedic, so patients don’t have to wait to receive medical treatment – they are getting hospital-level medical care as soon as RACQ LifeFlight Rescue arrives.”

Mr Schultz says up to 30 per cent of costs are covered through fundraising in the community and these costs are ongoing and increasing as demand for the service grows.

“The next four decades will offer new challenges,” he says. “In the future, we will continue to keep up with the latest technology and attract the most highly-skilled aeromedical crews in the world.

“We are privileged to have incredible support from the community and I would like to see that continue to gain momentum. In many ways, we belong to the community. It’s the people’s rescue service.”

One of the most high-profile nights on the Coast social calendar, the Flying Forties LifeFlight Ball, is fast approaching and is the biggest fundraising event for the Sunshine Coast base.

Celebrity chef Matt Golinski will be a guest of honour at this year’s black-tie event, which will be held at Novotel Twin Waters on April 5.

LifeFlight is a community-based charity. Up to 30 per cent of costs are covered by funding from sponsors and donations.

The service is provided at no cost to the patients.

Since the first patient was airlifted in southeast Queensland in 1979, the organisation has saved more than 50,000 lives. 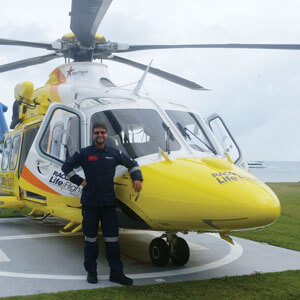 RACQ LifeFlight Aircrew Officer Scott Reeman joined the organisation on the Sunshine Coast in the mid-1990s and is one of the longest-serving current team members. Here, he shares his insights into his life in the sky.

“In 1996 I joined Sunshine Coast Helicopter Rescue Service, which is now called RACQ LifeFlight Rescue, as a rescue swimmer conducting surf patrols. There was a natural progression to winch operator and assisting the medical crew.

“As an aircrew officer, I assist the pilot in mission planning, navigation, co-ordination with other emergency services, identifying safety risks and hazards and supporting the pilot’s decisions in the cockpit.

“We are a conduit between where people are and where they need to be. We can’t do anything about what caused the situation, but we know we are providing a higher level of care than they might have received otherwise.

“Even though the flight crew are very hands on, assisting the medical crew, we are a little removed from the health-care responsibility. Our job is to safely get the healthcare professionals and their gear to the patient, then take them to the most appropriate healthcare facility.

“I have so much admiration for our RACQ LifeFlight Rescue paramedics, nurses and critical care doctors who deal with trauma and sickness many times a day. It’s not for everyone.

“We are on call 24/7 to respond to any type of emergency situation. They could be rescues in the big surf, long-term searches for someone bobbing around in the ocean waiting to be rescued, landing on the highway for a high-speed collision, or picking up a critical-care medical team to do an inter-hospital transfer, being on call by pager (pre-smartphone days) and getting patients to a safe place, then going home after cleaning up for the next job. All of this could have been in one day.

“During natural disasters, the number of taskings increases for the emergency services, and land-based services have trouble getting access to people, even in suburban areas.

“The floods of 2009, 2010, 2011 were perfect examples of this. So many calls were coming in – everyone with genuine concerns and requests for assistance – it was a real challenge to render assistance to everyone at the same time.

“Long-time residents of the Coast will well remember seeing the very reliable, capable and trusted Bell Jet Ranger and Longranger aircraft which operated in this area for many years. There wasn’t much we couldn’t do in them. In those days, we manned the base during the day and were on call at night.

“We had to fly from our base at the Maroochydore Airport to Nambour General Hospital, pick up a specialist emergency retrieval team consisting of doctor and nurse, then fly to the job. Today, the base is manned 24 hours, with a pilot, aircrew officer, flight critical care paramedic, and a LifeFlight critical care doctor.

“Basically, the cabin of the helicopter is a flying ambulance, emergency department or intensive care unit. The equipment may be smaller and lighter to allow it to be mobile, but it is as advanced as it gets anywhere in the world.”

Momentum grows for student strike
Is your technology spying on you?