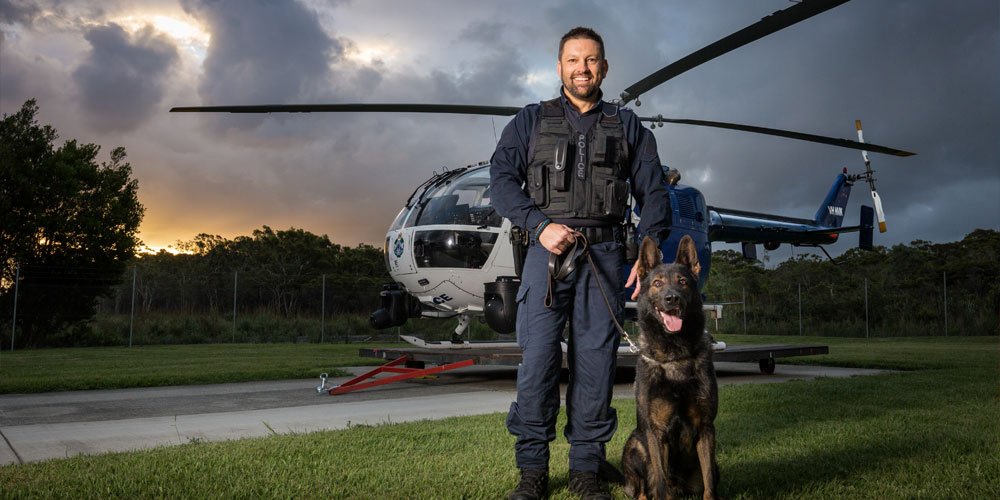 Just like a superhero with a trusty sidekick in a movie, a specially trained police dog and police officer go hand in hand.

Tasked to assist in a variety of frontline policing roles, police dogs complement the work of human officers and often go above and beyond in ways people cannot.

In 2022, the Queensland Police Service (QPS) dog squads are celebrating 50 years of support to the state. Introduced in 1972, dog squads provide efficient and effective support in tactical first response.

The QPS has 15 dog squads with 86 dog teams, and the Sunshine Coast District Dog Squad includes six experienced and dedicated handlers and their police dogs.

At the helm is Officer in Charge of the Sunshine Coast Dog Squad Sergeant Craig Law and police dog Chuck.

The local squad began in 1984 with two handlers, and in that time 47 police dogs have served the region. As well as six-year-old Chuck, today the squad includes Chico, Ninja, Darth, Maloo and Brock.

There are several areas police dogs can be trained in, and police dogs on the Coast are general purpose dogs. General purpose dog teams offer support to first responders and track someone who has left an incident, may have committed an offence or is missing. These dogs are trained to track by smelling a person’s scent.

“Our main roles are to assist with break and enter offences where offenders decant from a scene, for tracking situations, sieges, major incidents, missing persons
– anywhere a dog can help remedy or assist to searching,” Sgt Law says.

“An offender might run from a scene and disappear into the darkness and low and behold some of these dogs can track anything a kilometre away or further.”

Sgt Law says a police dogs’ work can be lifesaving. “We’ve had scenarios where our dogs have located people that without intervention the person would have lost their life.

“That could be tracking and locating a missing person, mental health patients or people who are suicidal.”

When not on the front line, police dogs enjoy life as a family pet with their handlers. Sgt Law says it is a rewarding role training and raising a police dog from a puppy to service and they always know when it is time to work or play.

“I can think of countless scenarios where I’ve got the dog at home throwing a tennis ball around with the kids and then an hour later, he is tracking an angry offender into the bushland.

“They know when they get in the car and have their equipment on it is work time, then when they are home, they chill out and enjoy home life just like us.”

Police dogs go through training programs for around 18 months before transitioning to frontline work. QPS has a hybrid program, either breeding or purchasing German shepherd puppies to grow into general purpose police dogs.

Other dog squad roles in Queensland include drug detection dogs, blood detection dogs and cadaver dogs to locate human remains. Sgt Law says depending on their health and size, police dogs usually serve for seven years before retiring to live a happy life at home with their handlers.

Continue Reading
You may also like...
Related Topics: police

Creative calling: How one woman’s culture inspires her work
The generation game