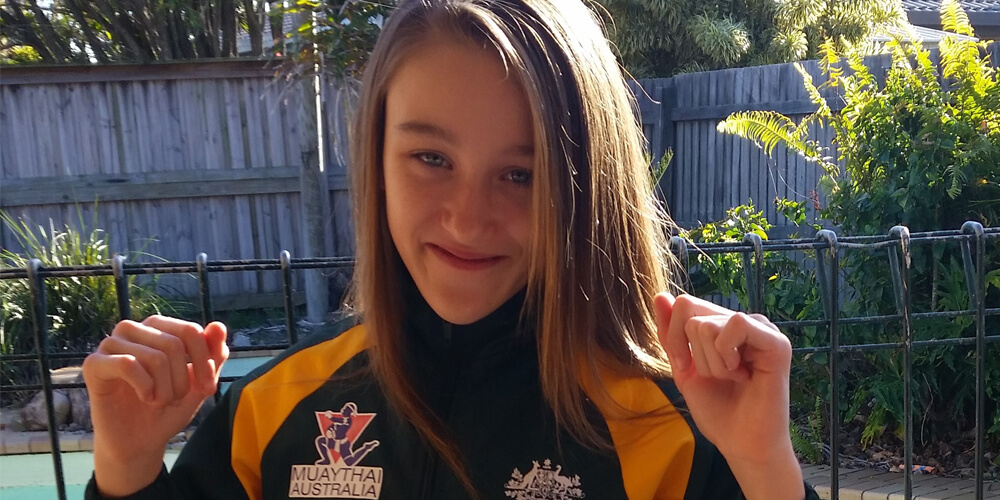 Skylah Hamill may be small in stature, but this dynamo can pack a punch.

Hamill is the new Muay Thai World Champion in the 10-11 year girls 38 kilogram division… and she has steamrolled her opposition in just five fights to get there.

It is an even more impressive accomplishment given the Wurtulla 11-year-old only discovered the sport 18 months ago.

Hamill’s first fight in February this year saw her take out gold at the nationals to be crowned the Australian Champion for her division. Her second fight secured her the Coastal Warfare win here on the Coast, and her latest three bouts were in Bangkok, Thailand for the IFMA World Championships from August 3 to 11.

In 40 degree heat, Hamill beat a Thai opponent, automatically won when her Swedish opponent failed to show, and took out the gold medal by beating her New Zealand opponent in the final round.

Hamill had tried her hand at cheerleading before moving on to mixed martial arts, but it wasn’t until she gravitated to the full contact of Muay Thai that mum Sarah Lewis says she “came alive”.

“She was a very shy, quiet girl and no-one could understand how she has been able to do what she does. But she gets into the ring and she just transforms,” Lewis says.

“She is more confident now and her school work has become amazing. She sets her own alarm and gets up and gets dressed ready for the day. She is very disciplined in all areas.”

Under the guidance of Joe Hilton at the Sunshine Coast Thai Boxing Centre, Hamill trains from 4am to 6am every morning and is back in the centre after school from 4pm to 6pm.

Although Lewis says it was hard to watch her daughter in her first fight, she now knows Hamill can hold her own.

While Lewis and partner Mat Hamill are amazingly proud of their daughter, who has named herself Skylah “Headshot” Hamill in the competitive realm, it has not been an easy journey for them financially.

Lewis says with lack of sponsorship, they juggle multiple jobs to enable Hamill to compete.

“Skylah is only young and has so much drive and determination to continue to succeed and she is surrounded by a team that is more like a family with Joe and the club. She trains like one of the adults, so that helps her strength,” she says.

“Because she is so young, we have had a very hard time securing any sort of sponsors, so we’d love to get some fight gear sponsors on board, or even someone who can help with gym clothing or runners. It will all help as it can be very costly.”

If you can help, or want to follow Hamill’s journey, visit facebook.com/girlscanfight.