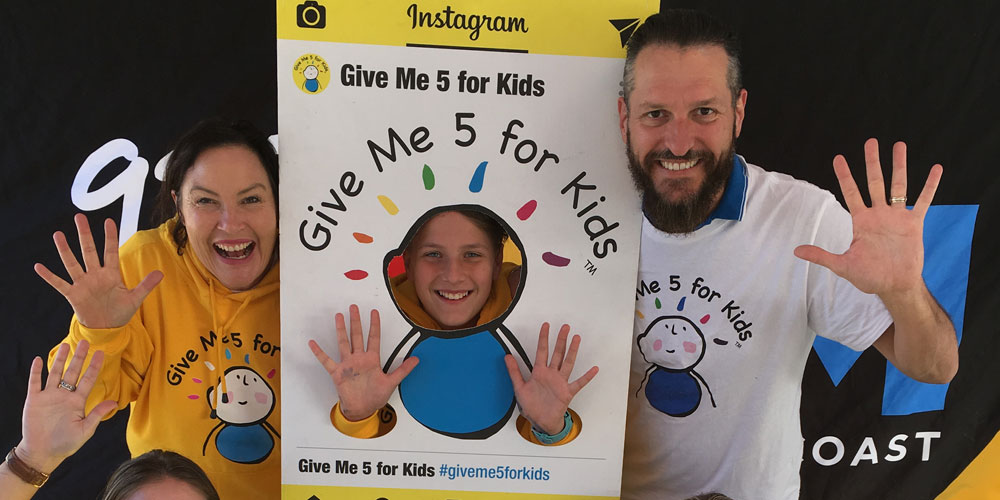 The community has once again thrown its support behind the annual 92.7 Mix FM Give Me 5 for Kids (GM5) campaign and breakfast announcer and passionate GM5 campaigner Caroline Hutchinson is confident they will reach their $500,000 fundraising goal this year.

The total amount raised for the 20th anniversary of GM5 will be announced on air at 8am on July 5 and brings a month of incredible events and activities to an end.

Ms Hutchinson says the month started off “a bit slow” with numbers down on previous years, but as June progressed, the community showed up in full force.

One of the last events was Jessie’s Party in the Park at Golden Beach on Sunday, which turned into a beautiful, sunny day.

Reflecting on this year’s campaign, Ms Hutchinson says there is just as much passion and support from the community as there was when it was first launched two decades ago.

“In one way, 20 years has gone so quickly and when I look back through every single one of the campaigns, I always find something that I can’t believe we pulled off,” she says.

“This year, one of those highlights for me was bringing back the Cow Pat Bingo and it was literally due to community involvement that it happened. We had Immanuel Lutheran College, Roz White, Kenilworth Dairies and Kook pull it all together in two days and we made $10,000.

“This was only possible because the community jumped on board and said ‘we can do it’ and these types of events are always highlights for me.”

Ms Hutchinson says there were tears aplenty at the annual Sam’s Pool auction, where Mark and Tanya Martin donated a pool package from Narellan Pools in honour of their late son, who died from a rare cancer at the age of eight.

“Mark and Tanya epitomise Give Me Five, those who choose to raise money for other people’s kids after the worst thing happened to their family,” she says.

“They are the heart and soul of GM5 and there are so many people bidding that this pool always go for full value, no one’s looking for a bargain, they want to donate and honour Sam and it makes us cry every year.”

Brooke Seignior’s attempt to break the world record for the most amount of haircuts completed in 24 hours wasn’t completed, but Ms Hutchinson praised the valiant efforts of the Brooke Morgan Hair owner.

“Mark [Darin] and I have done 24-hour broadcasts where you sit down the entire time and think and complain that we are so tired, but Brooke was on her feet and worked incredibly hard,” she says.

“She started at 7am and made it until 2.30am the following morning before she began to feel ill. She fell at the last post, but she raised a whole lot of money and is such a legend.

With the milestone campaign completed, Ms Hutchinson says the core team of 12 radio station members are celebrating another successful year and more than $5 million raised since 1999.

“In June, we actually get to meet families who are at the hospital and we see the difference that the money makes when it is sent by Wishlist on equipment and services for paediatrics and half a million dollars literally changes kids’ lives,” she says.

Wishlist, the beneficiary of GM5, will use this year’s funds to continue the Sunshine Coast Clown Doctor Service for another two years, as well as purchase other much-needed equipment and support services for paediatric patients and their families.

Continue Reading
You may also like...
Related Topics: Charity, Give Me 5 For Kids, GM5K, Wishlist

Nowhere to go, nothing to do
But first, coffee