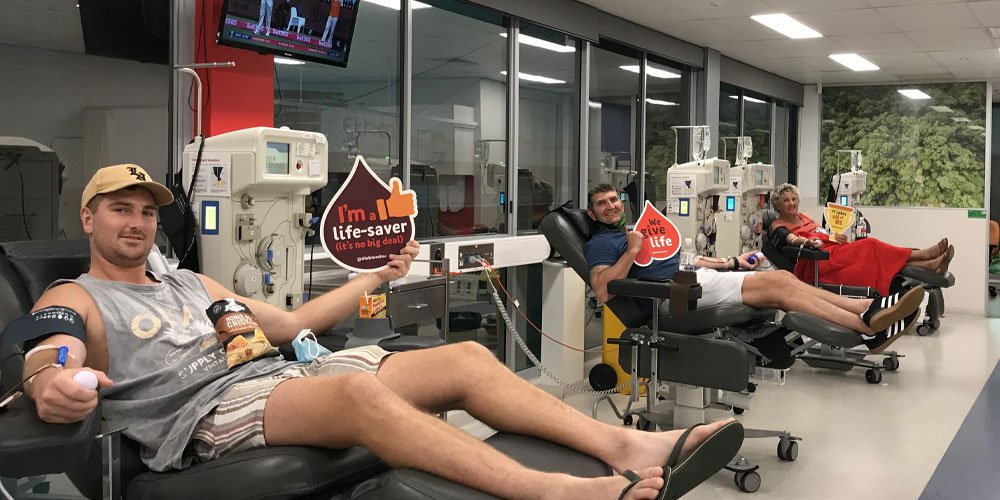 Three generations of one Sunshine Coast family have made the record books after rolling up their sleeves to save lives.

Grandmother Jennette McCosker went above and beyond to do her part in donating blood, by rounding up her son and grandson to join.

Approximately 850 donations are needed each week on the Sunshine Coast and donating blood will take only one hour. Every blood donation can help to save three lives. Red Cross Lifeblood is calling on more residents to consider donating blood, especially after a decline in numbers since the peak of the Omicron wave.

Mrs McCosker has made 67 blood donations since first seeing a mobile blood centre at Caloundra 13 years ago. Since then, the 71-year-old has donated blood and plasma.

“I had seen the big red donation van at Bunnings one day and decided to go in and offer to donate,” she says. “That’s when it started, and I read on the vehicle that one in three people will need blood but only one in 30 take the time to donate.

“You get a very special feeling because of what you have done. Often I get an email telling me to which hospital my blood or plasma has gone and how many lives it has saved on the day.”

Her son Shane and 26-year-old grandson Matthew are also regular donors and Mrs McCosker thought it would be a special family affair to all donate at the same time at Maroochydore. “It took a bit of rearranging by the staff to get us all together in the centre and I was told that it was very rare to have three generations together doing lifesaving donations.”

So rare, in fact, Mrs McCosker contacted The Australian Book of Records to see if it had been done before. Receiving confirmation it was a first, the family officially set a new record for three generations of one family giving blood at the same time, in the same place.

She hopes this will inspire others to do the same.

Red Cross has donor centres at Maroochydore and Nambour, plus a mobile centre that travels across the region. Walk-ins are welcome, however, donors are encouraged to book an appointment by calling 13 14 95 or visiting lifeblood.com.au.