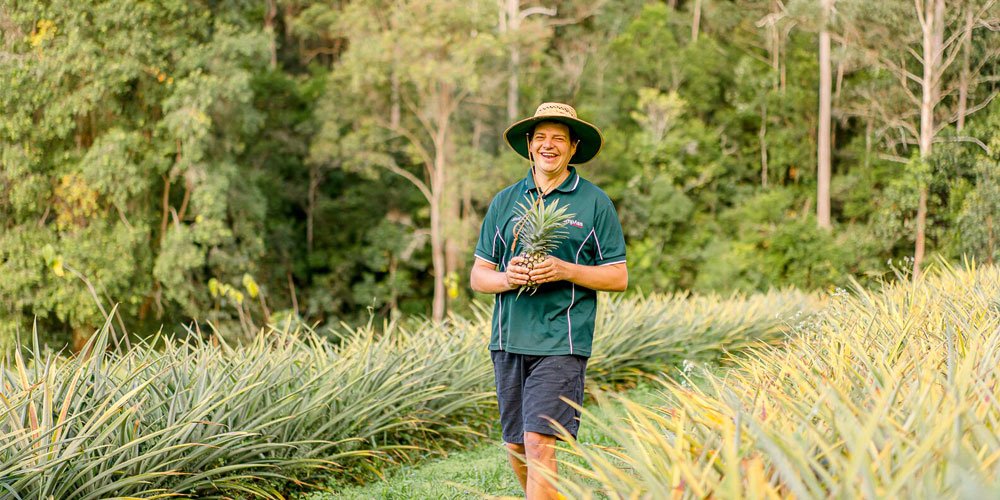 Swing off a dirt road out the back of Palmwoods on to a bitumen drive that takes a dip before nosing past two older-style brick buildings and a block fence painted with sunny yellow flowers to a green paddock ramping up towards the sky.

A cascade of verdant green flows around heaped garden beds, colourful sheds, animal yards and what is surely the most luxurious chook pen on the Sunshine Coast, aptly named Cluckingham Palace.

Welcome to Compass Farm, where it seems everything grows, but, as I will find out, the most important product is its people.

The time is close to 10.30am and people are scurrying like ants to a shed, which is the working hub of the farm where they will meet for morning tea.

I meet Beth, who is just a little excited about singing a Whitney Houston number in front of everyone in a few days’ time, and Mitch, who has earned farm fame for his extra-curricular theatrical activities.

Around the corner, a couple of blokes keep quiet watch over trays of drying garlic and boxes of cleaned and trimmed ginger, and another is keen to point out there are also buckets of blueberries.

Everything they show me has been grown on the 20-acre property, which is a place for people with disabilities to learn, get outdoors, make friends, and experience work and all its toil and resultant satisfaction.

The farm is one of a number of social enterprises run by the Compass Institute, a Sunshine Coast-based charity that provides educational and vocational training opportunities for people with disabilities to go some way towards filling the void that often opens up for them once they finish school.

Compass works with 160 trainees at five locations between Caboolture and Gympie. Besides the farm, other Compass social enterprises include cafes at Nambour and the Maroochy Regional Bushland Botanic Garden, Earth and Wood woodwork and pottery at Caloundra, and the Wabi Sabi gift shop at Palmwoods.

The farm began in a small way 10 years ago on land that had been used for mango and avocado farming. From four trainees and two trainers, it has grown to host up to 50 trainees a day led by 15 trainers.

The concept of the farm grew from a seed planted in Compass managing director David Dangerfield’s mind more than 20 years earlier.

“The idea of Compass Farm first came to my mind in the late 1980s and was based on an experience I’d had in New Zealand,” Mr Dangerfield says.

“Over the following 20-plus years the dream was always in the background until Compass launched in 2003. From that moment on our team focused on making the dream a reality.

“In 2010, through a combination of serendipity, planning and hard work, we were able to purchase the property in Hunchy and create the amazing space that is there today.

“Compass Farm is a showcase where people with disabilities demonstrate that they are more than capable of taking up meaningful roles in their community.”

The farm program is flexible and planned activities can be thrown out the door on any day to attend to jobs that can arise on a farm like fixing a broken pump.

Trainers’ own interests can also direct learning. Singing sessions on a Thursday afternoon are held under the guidance of and using equipment belonging to a trainer who has a background as a professional singer. But while that is fun, there is work to be done – digging, planting, watering picking, pruning.

What is grown on the farm is either used or sold in the onsite Harvest Kitchen, another Compass enterprise, where trainees make jams and chutneys, and cook lunch for those who want it. 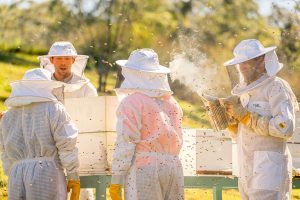 Money made through the individual activities on the farm is reinvested into the activities. This provides extra incentive for trainees to take pride and ownership in their work.

The trainees can choose between activities that interest them. While some enjoy cooking in the kitchen, others prefer to garden. Creative types and those who want some quiet time can experiment with farm art, which includes but is not limited to mosaicking, drawing, woodwork, and eco-dying.

Some of the trainees split their days between the farm and Compass’s cafes. Others go out to work on the lawn-mowing run Rakes and Panes initiative, which is another of Compass’s social enterprises.

The benefits for the trainees come in a variety of ways.

For many of the trainees, who come dressed in the same sort of high-vis shirts their parents wear, the farm is their chance to go to ‘work’ like the rest of the population.

For some, there have been health benefits. One trainee has lost 27 kilos simply because of the amount of physical activity involved in working on the farm.

One parent reported that for the first time in 18 years, she had enjoyed a night of unbroken sleep because her child had slept through the night after a day working on the farm.

For other trainees, the time at the farm gives them something to talk about at the dinner table at night.

Sometimes farm manager Andrew Diggines sees changes that are nothing short of miraculous.

He tells the story of a trainee who was meant to be helping build a fence on the farm but never once swung the hammer that was put in his hand.

Nobody knew how much he was getting out of watching construction of the fence until his mother told them that he came home every night talking about the fence in detail, down to the distance between posts and wires and the number of nails.

He also tells another story of a young woman who was non-verbal when she started coming to the farm. She gravitated towards the animals and began to talk to them, and then progressed to talking to people.

One day she told Mr Diggines that a goat was sick. The goat was found in a bad way the next day but recovered after veterinary treatment internal parasites.

Mr Diggines believes everyone has a gift, and where they might fall short in some areas, they might be talented in others. The variety offered by life on the farm allows trainees to find their own niches and grow, developing knowledge, practical skills, social skills, communication skills and confidence.

The exchange in knowledge on the farm is far from one way. Although they come to the farm to learn, and grow through growing, the trainees are also teachers.

“I’ve learnt more than they have,” Mr Diggines says.

As Mr Dangerfield explains, Compass trainees have much to give.

“These people have the power to enrich all our lives with the magical combination of love, kindness, gratitude and acceptance. The people who receive that gift through interaction and relationship with Compass always comment on how it changes their lives for the better”.

It’s amazing what you can find growing in a paddock.

Compass works with 160 trainees at five locations between Caboolture and Gympie.

Besides the farm, other Compass social enterprises include:

Stars on the rise

Two members of the Sunshine Troupe, a Coast-based performing arts group for adults with a disability, are learning more about the performing arts through a residency at Brisbane’s La Boite Theatre.

Mitch Runcie, a Compass trainee, and fellow Sunshine Trouper Allycia Staples, are currently rehearsing in Brisbane at La Boite Theatre as part of a residency they are involved with through the inclusive performance group Aha Ensemble.

The ensemble is led by Daniele Constance and has members with and without disabilities.

The pair has been travelling to Brisbane for five years with the group and are excited about their new project, Yolk, following a stand-out season at Brisbane Metro last year with another show, Explain Normal.