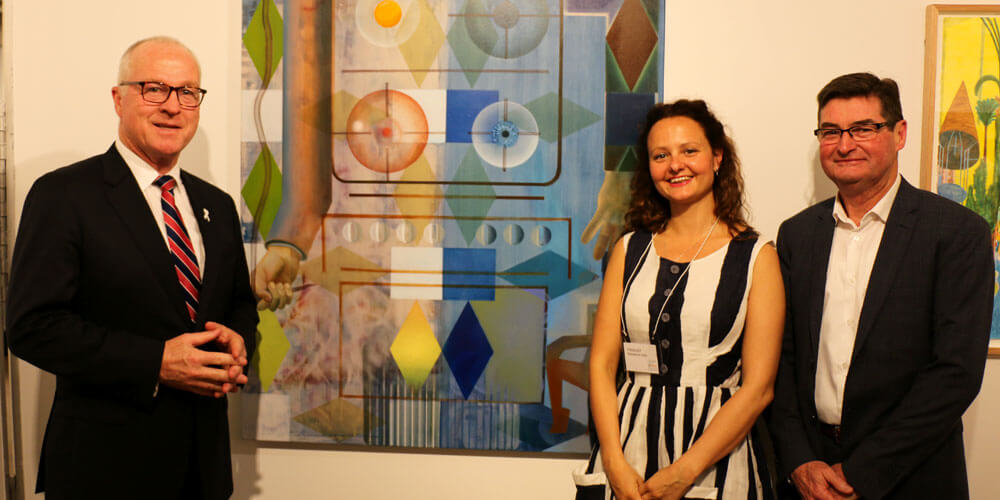 Art lovers are being encouraged to vote for their favourite piece in the prestigious Sunshine Coast Art Prize.

While the winners of the Sunshine Coast Art Prize have already been announced, Coast locals and art lovers still have time to vote for the People’s Choice.

Madeleine Kelly was named the $25,000 major prize winner for the event, for her piece Allowable Forms and Unconscious Facts, a contemporary painting that combines figurative and abstract imagery.

Ms Kelly’s piece has now become part of the Sunshine Coast Art Collection, joining more than 300 works (including paintings, photographs, prints, sculpture, ceramics and textiles), which make up the collection.

Mayor Jamieson says while the Sunshine Coast Art Prize has become the region’s signature annual art prize, it has also built up a national profile that culminates in an exhibition of some of the nation’s best contemporary art.

“Our thanks to the judge Dr Campbell Gray, who decided on the winners from a high-calibre exhibition,” Mayor Jamieson says. “It would have been a difficult task and the three works he has chosen reflect the diversity of visual art that the Sunshine Coast Art Prize is able to showcase.”

Dr Gray, the director of The University of Queensland Art Museum, selected the winning artwork because of its complexity and ambiguity, underpinned by its high level of craftsmanship.

“The foundations of this work are based in the artist’s visual and theoretical awareness of art history together with extensive personal capacity in the craft of painting,” Dr Gray says.

Local art lovers have a chance to see if they agree with the judge’s verdict – organisers are calling on them to vote
for their favourite artwork by visiting the exhibition and voting in the gallery or voting online at the gallery website before October 14.

It’s been a tough competition. From the quality field of 325 entries, 40 established and emerging artists were named as finalists in the prestigious award. Arts portfolio councillor Rick Baberowski says the art prize attracted entries from some of Australia’s best artists.

“The growing acclaim of the art prize has seen its reach spread far and wide, attracting first-time entries from a new generation of contemporary artists, as well as entries from several established artists with strong national and international profiles, including Jon Campbell, Madeleine Kelly, Danie Mellor and Monica Rohan.

Head to gallery.sunshinecoast.qld.gov.au/Art-Prizes/Sunshine-Coast-Art-Prize/Peoples-Choice-Voting to vote for your favourite work. Complete the survey and you’ll also go in the draw to win a Caloundra Regional Gallery shop gift voucher worth $100. Voting closes Sunday, October 14. The People’s Choice winner will be announced at the opening of Local Artists – Local Content Art Prize 2018 on Wednesday, October 17.

What’s the future of NAPLAN?
Riding a new wave