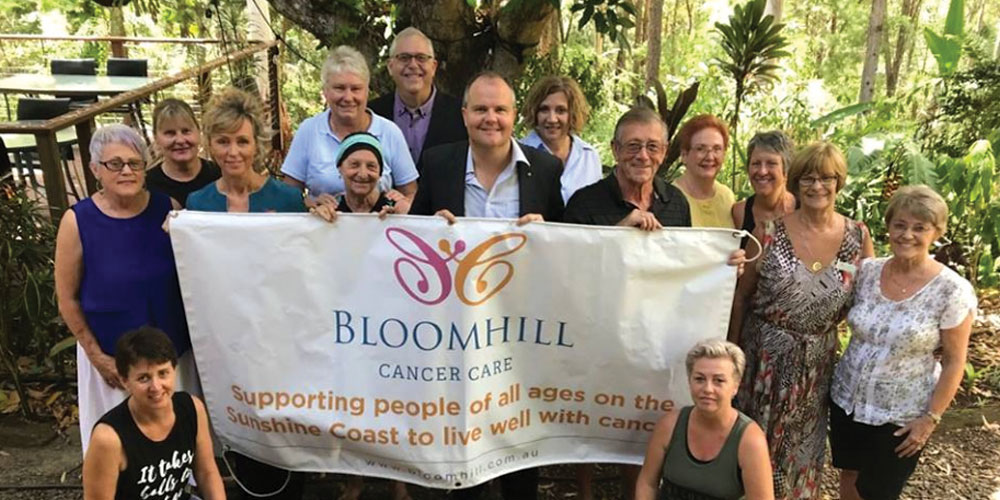 The Sunshine Coast community has thrown its support behind Bloomhill Cancer Care after the charity voiced its need for urgent financial support.

Close to 4000 people have signed the Save Bloomhill petition, which was launched last week and calls for the State Government to redirect more than $600,000 it owes the Federal Government to Bloomhill in order to assist in the funding of essential nursing staff.

The request is not a new one, with Bloomhill CEO Chris Franck writing to Queensland Minister for Health Dr Steven Mills in November last year, explaining the self-funded charity is not making enough from its 12 Coast op shops and annual fundraising events to continue to cover the growing number of clients it assists at the Buderim centre.

The money requested from the State Government would alleviate the pressure on Bloomhill’s budget by covering nursing services, freeing up the money it raises to pay for the many other allied health and support services it offers at its Buderim centre.

In a more recent letter to Dr Mills, Mr Franck said Bloomhill’s client base is increasing by 35 to 40 per cent each year as cancer diagnosis rates increase.

“Each of our oncology nurses holds a caseload of over 250 clients at any time. This reality is juxtaposed by Bloomhill facing reduced funding opportunities, being entirely community and self-funded,” he writes.

“If we have no funding alternative by the 15th of February 2019, critical decisions will have to be made regarding service and staff consolidation, forcing a redirection of patients back into the public health-care system, which will cost taxpayers far more than the cost of our services

“We are therefore in this vulnerable time reaching out to you to respectfully request support in the form of funding of our oncology nurses.”

“If we keep only 10 per cent of our active clients from being admitted to hospital once per year each, we reduce the burden of health for the State Department by more than $500,000 per year,” he says.

With the funding deadline looming, Mr Franck says he remains cautiously optimistic that a resolution will be found, but admits the stress has taken a toll on staff.

“Living in such times of uncertainty is very stressful. Clinical staff are anticipating an embargo to accept any new clients – a horrific thought to have to turn clients away when they are in dire need of support,” he says.

“Volunteers continue to express their dismay in funding requests being ignored by both levels of government.”

Mr Franck says he has received many calls from the community expressing shock that no government initiatives to fund Bloomhill have yet been forthcoming, but they have been buoyed by the level of support they have received from Coast residents and local businesses.

“Thank you from the bottom of our hearts for your continued support,” he says. Show your support by signing the petition at savebloomhill.com.au.

How can you help?

Bloomhill has partnered with not-for-profit raffle Play for Purpose, which gives Australians the chance to support a cause that’s important to them, while sharing in $500,000 worth of prizes. With a one in 34 chance of winning a prize and a minimum of 50 per cent of ticket sales going directly to Bloomhill, the timing couldn’t be better. To enter, visit playforpurpose.com.au/bloomhill-cancer-care/prizes and buy a ticket before February 25 to go into the draw to win one of the major prizes, travel vouchers or gift vouchers. All tickets are just $10 each and $5 from each sale goes to Bloomhill.

Continue Reading
You may also like...
Related Topics: Bloomhill, Charity