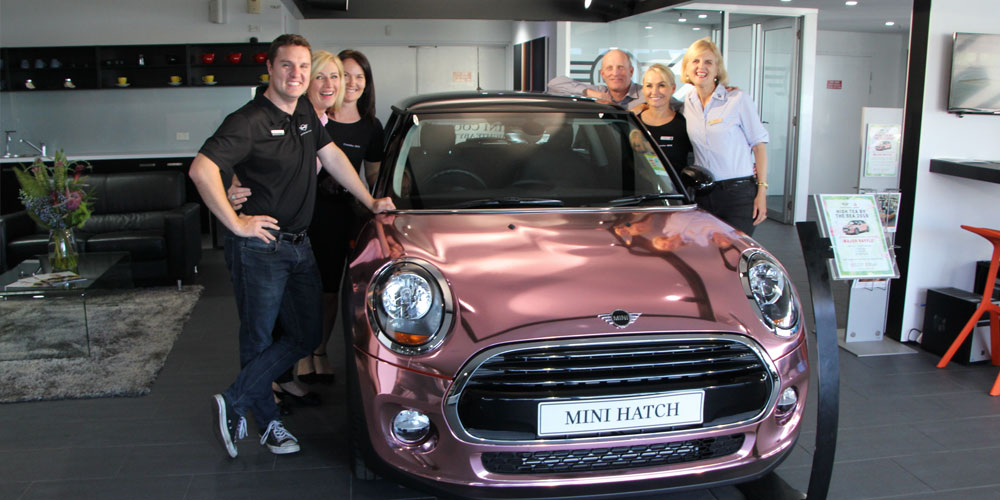 The organisers of the second annual High Tea by the Sea must have been inspired by international icon and serial giveaway queen, Oprah.

Even though tickets to their October 14 event at the Maroochy RSL sold out in the blink of an eye, Coastline Mini Garage and 4 Ingredients are pulling out all stops to ensure their massive raffle, which anyone on the Coast can enter, is jam-packed full of some jaw-dropping prizes.

The major prize is a rose gold-wrapped 2018 Mini Cooper three-door hatch released in July and Coastline marketing manager Sophie Kurz says this model is a step up from the Mini won by a Caloundra mother last year.

“It’s faster, safer and more connected and has insane infotainment inside the cockpit with all of the tech bells and whistles you could imagine,” she says.

“This is the model that will remain unchanged on the market for the next four years. In terms of colour, we really wanted to one-up it this year and because everyone loves a bit of rose on the Sunshine Coast, we decided to go with rose gold because it’s in vogue and is a trend that has stuck around as well as being a nod to our major beneficiary, the National Breast Cancer Foundation.

“It has a rose gold wrap, so the winner can choose whether to keep that on, or take it off and drive around with the brand-new Mini hue – solaris orange – which is underneath. Either way, they will be driving around in the newest of the new Minis, which is worth around $40,000.”

But that’s not all. Entrants will also have a chance to win the second major prize. 4 Ingredients’ Kim McCosker says the package is valued at more than $6000 and includes a complete Studio Republic Photographic Experience that includes the shoot and all of the images, a one-bedroom apartment for two nights at the Mantra Mooloolaba Beach Resort, a Mini Cooper to drive for the weekend from Coastline Mini Garage and dinner for two at Cellar Door in Mooloolaba.

“The lovely team at 4 Ingredients will also make a delicious gluten-free orange and almond cake to ward off those midnight munchies and leave a signed copy of the latest bestseller with the recipe in it,” she says.

Around half of the 5000 tickets have already been sold and Ms Kurz says because the tickets are not available to purchase online, the odds of a Sunshine Coast winner are tremendous.

“Last year, we sold the final 1500 tickets on the day of the event in the room, so this is why it’s important for the general public to make sure they snap one up in advance,” she says.

“Not only have we added a second major prize, but every single person who buys a raffle ticket this year will get a $500 Studio Republic voucher as a thank you for their much-needed donation to the NBCF.”

Tickets are $20 each, three for $50 or 10 for $100 and can be purchased at Coastline Mini Garage and Coastline BMW offices. Popup locations around the Coast will also give people extra opportunities to purchase tickets, or you can call 5491 9100.

Ms McCosker says their aim is to blow last year’s NBCF donation of $55,000 out of the water this year.

You can buy raffle tickets at Coastline Mini and Coastline BMW, or visit one of these pop-up locations:
September 22 at the Open Air Movie Night – Avatar, Kawana Sports Precinct
September 29 at the Coastline Mini Dealership with special guests
4 Ingredients
September 30 at the Caloundra Markets