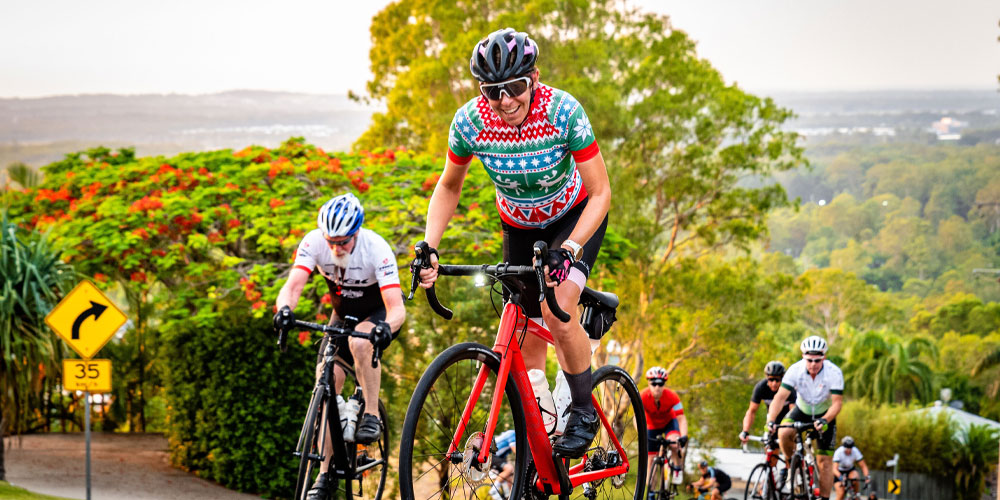 An event that challenges cyclists to tackle nine of Buderim’s hills in three hours is happening again this year.

After a break in 2020, the Buderim 9 Challenge is back. The event, which is not for the faint-hearted, will see cyclist test themselves on December 19 as they attempt to ride 76 kilometres for a worthy cause.

Event organiser David Wighton says the challenge, which is now in its ninth year, began after a group of cyclists thought they would give the town’s biggest road climbs a go in one ride.

“It’s grown from there and has become a really big charity event as well,” Mr Wighton says.

“They are all really tough climbs on their own but you put the nine together and it’s a really challenging event.”

Starting at The University of the Sunshine Coast, cyclists make their way up and down the hills of Dixon, Cogill, Ballinger, Crosby Hill, Glenmount, Mons, Lindsay, Jones and Mooloolaba roads, finishing back at USC.

Riders can choose to take part in the Buderim three, six or nine, or the electric bike event.

Mr Wighton because of the gruelling course, only 50 per cent of riders complete all nine hills in the time frame to become true “Buderim niners”.

“Some people do it every year and they never make the nine hills,” he says.

“It’s a three-hour event, so you have to be back within the time and you do as many hills as you can in that time. It’s tough getting up the hills but it can be pretty quick getting down the hills.”

The event attracts a variety of riders but is most popular with seasoned amateur road cyclists. This year the oldest rider is 75 years of age.

The 2021 event will raise money for The Pyjama Foundation, which supports the dreams of children living in foster care.

Mr Wighton is expecting 300 cyclists to participate in the event, with plenty of vantage points for spectators.

“You can stay on top of Buderim and just move along from King Street to William Street and see the riders as they reach the top of the hills.”

Registrations for the Buderim 9 Challenge are open at buderim9.com.au.

Continue Reading
You may also like...
Related Topics: Buderim 9, Charity

Food for the soul
Code could save lives