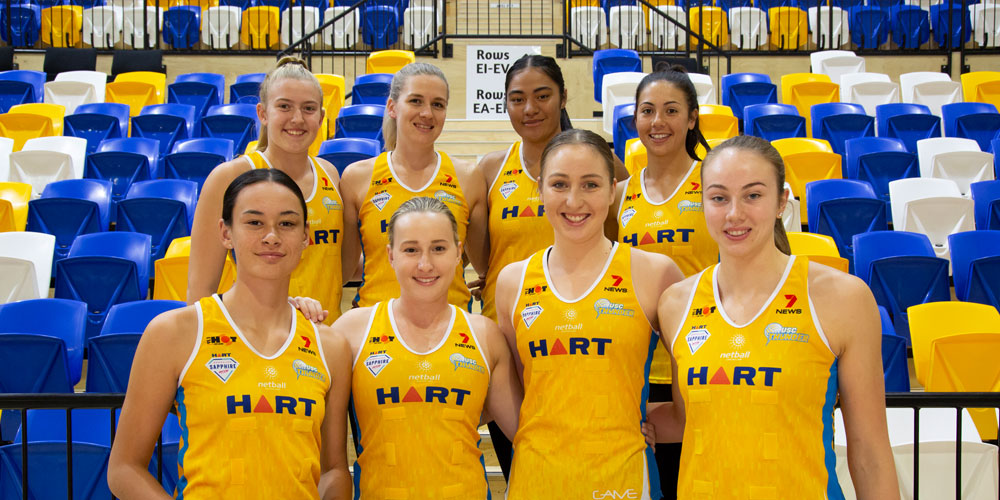 Buderim-born Ashlee Unie will step onto the court at the helm  of the USC Thunder on June 23 as the new club debuts in Queensland Netball’s 2019 Sapphire Series.

Based at the University of the Sunshine Coast’s high-performance sports precinct, USC Thunder is creating a valuable step in the pathway between grassroots netballers and Sunshine Coast Lightning, the two-time Suncorp Super Netball champions.

For Ms Unie, who developed a passion for netball as a member of the Buderim Firebirds, being named the captain of the team is a real honour and the title is even more special as Ms Unie was the club’s first signing.

“Playing for USC Thunder means that I can pursue my netball dreams in the birthplace of my netball journey,” she says.

“All my junior netball was completed on the Sunshine Coast, from learning to catch and pass at the old courts in Elizabeth Daniels Park and honing my skills each week at Fisherman’s Road, to more recently training as a part of the Lightning squad at USC.

“Growing up as a part Sunshine Coast landscape has shaped me as a player and also as a person and I am indebted to those who have helped me along the way. I am thrilled to be able to represent the Sunshine Coast netball community as a part of the USC Thunder in 2019.”

Josephine Hungerford has been named as vice captain and the Thunder includes high-level athletes such as 19-year-old Jesse Wardlaw, who plays AFLW with the Brisbane Lions, and Abigail Latu-Meafou, who has already been called up to the Queensland Firebirds in the Suncorp Super Netball league to fill in for an injury.

Led by Garry Pashen, the only male coach in the league, USC Thunder will debut in the semi-professional Sapphire Series on June 23, competing against six clubs from across Queensland. Matches will be played at the expanded USC Stadium in Sippy Downs and the new Queensland State Netball Centre in Brisbane.

Mr Pashen enjoyed a stellar on-court career which included playing for the Sonix Australian Men’s Netball team, representing Australia in 2001, 2010 and 2011 before moving into coaching positions, including spearheading the SunCoast Lynx when it was created in 2001.

“Coming back to the Coast with another inaugural team is a nice little bookend for me,” he says.

Stepping into the role in October last year, Mr Pashen says there was no shortage of players interested in creating history with the Thunder.

USC Thunder is supported by netball clubs from the Sunshine Coast to Caboolture in the south, through Gympie, Bundaberg and Rockhampton in the north, and as far west as Longreach. The wide-ranging catchment ensures USC Thunder has attracted the best talent.

“Even though we only have unofficial links to the Lightning, training at the same facility and having access to the same equipment and the opportunity to develop good relationships with their coaching staff and some of the players as well means the girls are not only just being around an team, but they will be training in a professional manner,” Mr Pashen says.

Mr Pashen says the team is already playing “like they’ve been together for seasons”.

“Training is very much heating up at the moment and we are looking forward to getting going. It’s going to be a massively tough competition, but with us being a new club, we’ve got nothing to lose and we’re certainly going to throw everything out there,” he says.

“I know we will compete well and our focus is going to be on the performance. If we can do that well, the scoreboard will take care of itself.”

When the Sapphire Series was restructured and relaunched for 2019, they were in a strong position to launch the successful license bid.

“We wanted to make sure young women can stay on the Coast as long as they want to and be able to take their competitive sport to a higher level,” he says. “It’s actually a little bit surreal that they will be on the court in a few weeks.

“Even 12 months ago if you’d said this was going to happen, I wouldn’t have believed you.

“There has been a lot of hard work from a lot of different people and now we are hoping that the community gets behind the Thunder as passionately as they did with the Lightning.

“These girls have worked so hard and deserve to be celebrated and for us to be in awe of how good they are.”

To get behind the USC Thunder, visit thundernetball.org.au.