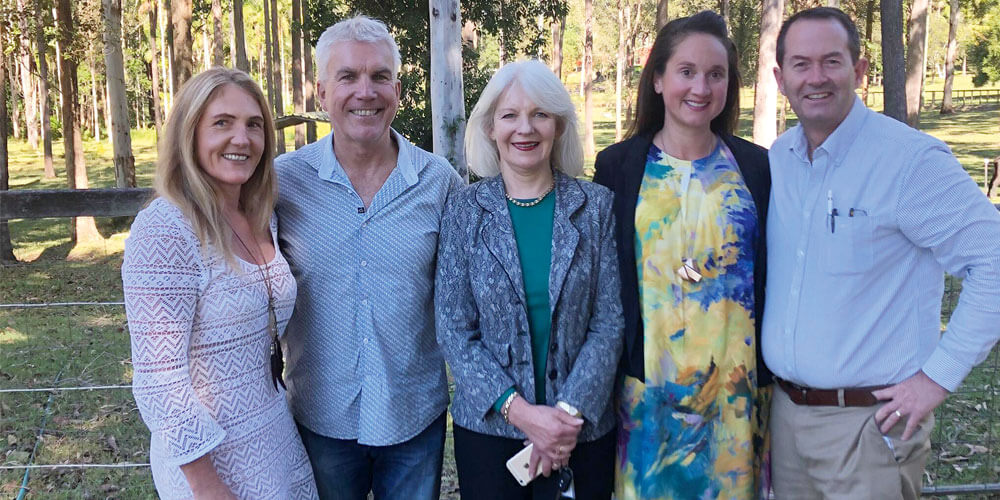 For a decade, bulimia nervosa silently destroyed Jorgia Forbes’ life. It savagely terrorised her happiness and her health.

“I became a little girl again while the eating disorder stole my identity and convinced me I was nothing without it.

“The power of the eating disorder [was such that] my world became its world. You are stuck in a world of shame and hate, and you become your own worst critic. Every comment or even compliment is twisted until it no longer resembles what was said.”

These powerful and emotionally-fuelled words were not lost on the 100-plus people who sat before Ms Forbes, who flanked by her parents, Mark and Gayle, shakily spoke of her illness on stage at the endED Main Event on Friday night.

This evening was a momentous occasion for the Forbes family. Not only was this the first major fundraiser for their vision to see the country’s first purpose-built residential eating disorder treatment facility built on the Sunshine Coast, but it was also the first time 24-year-old  Ms Forbes had publicly acknowledged her decade-long battle.

There was hardly a dry eye in the room as she provided a glimpse into how the mental illness wreaked havoc on her life.

Ms Forbes acknowledged her joy at welcoming her “miracle baby” Ruby Indiana six months ago and the steadfast relationship she has with partner Steven Martin.

“I see a future free from [my eating disorder],” she says.

“I will always remember my mantra – first love yourself.”

They are also the deadliest. Mortality rates in people living with eating disorders are up to 12 times that of everyday Australians.

Although eating disorders are often stereotyped by their association with teenage girls, people who access services through the Sunshine Coast-based eating disorders support network, endED, range in age from seven to 65 years old. Males make up 25 per cent of Australians with an eating disorder.

Mark and Gayle Forbes founded endED four years ago as a means of connecting with parents and carers who have loved ones with eating disorders and it has morphed into a powerful awareness organisation that has worked tirelessly to secure a future Australian residential treatment facility.

The name endED was chosen not only because ED stands for eating disorder, but because that is the name many parents and carers use to address their loved ones when they are in the grips of the mental illness.

Mr and Mrs Forbes now work full-time at endED in a voluntary capacity, responding to calls from a new family every day seeking advice and support for their loved one’s eating disorder battle.

“We know from experience that an eating disorder can be in your home for two to three years without realising it. So when [parents and carers] do realise, it comes out of the blue and they are in shock and don’t know what to do,” Mr Forbes says.

“We have a list of the GPs and other medical professionals that understand eating disorders,” Mr Forbes says.

While patients currently have out-patient access to psychologists, counsellors and dieticians, those who need in-patient care only have one choice – hospitalisation in a mental health facility, often for months.

“America has had homely residential facilities for the last 20 years, it’s just astounding that Australia does not have a single one,” Mr Forbes says.

“We need to get eating disorders out of the shadows to be discussed without the guilt, shame and stigma.”

This month, a partnership between endED and national eating disorder not-for-profit organisation the Butterfly Foundation has been established to acquire the idyllic 25-acre Mooloolah Valley property on which the facility will be located, and the Federal Government has announced $1.5 million support for its construction.

This will be based on individualised programs combining psychological, conventional and functional medicine, and holistic therapy-based treatment.

“It will advance the way eating disorders are diagnosed and treated, providing 24/7 intensive care and support as well as training, education and advocacy at the 12-bed facility,” he says.

“It will also include rooms for recreation, family therapy and group therapy.”

Member for Fisher Andrew Wallace, who stood up in parliament in 2016 to tell how his own daughter almost died from anorexia a decade earlier, is now a patron of endED and a passionate advocate for the residential treatment facility.

Mr Wallace says eating disorders can be devastating, not only affecting an individual’s relationship with food, but also their body image, confidence, mental health and overall health.

“Many suffer in silence, with only 25 per cent of people with eating disorders thought to be diagnosed,” he says.

Construction is set to start later this year, with endED Butterfly House expected to open in early 2020.

“The project has so far raised $1.3 million in philanthropic funding and has received hundreds of thousands of dollars in donated services and in-kind support,” Mr Wallace says.

“My hope is that endED Butterfly House will become a leading light and model for other residential eating disorder centres across the country.”

Families in the past have had to spend all their savings, sell their home, or mortgage it up to the hilt in order to afford treatment for their child in overseas residential facilities and this was one of the major factors that drove Claire Middleton to create the Butterfly Foundation in 2002.

Ms Middleton battled anorexia for 15 years, followed by bulimia, and then two of her daughters also suffered from anorexia. When sitting in a treatment facility with one of her daughters, Ms Middleton overheard another mother’s heartbreaking predicament.

She had gone into debt to send her eldest daughter to an overseas residential treatment facility to recover from an eating disorder and her younger daughter now needed treatment and she could not afford it. Sadly, this family’s anguish is not unique and has been affecting Australian families for decades.

Ms Middleton says an Australian residential facility has always been high on the Butterfly Foundation’s agenda and although she has since resigned from the charity, she has found kindred spirits in the Forbes family and Ms Thomas, and will assist endED into the future.

“It’s about giving these people the right dose of help and support to help them to recover,” Ms Middleton says.

“The model we have now is not administering the correct dose. It’s like going to the doctor because you have pneumonia and being told, ‘well that’s easy, I can cure you with antibiotics, but you are only allowed to take two pills out of the packet’.”

Ms Thomas says ED “held” her from the age of 12 and it got to a point where it was no longer about hiding her mental illness.

“You isolate yourself because it was easier without people around asking after you and you become a master manipulator,” she says.

“My parents tried everything they possibly could, but I was so hell-bent on the race to the bottom.

“My thinking was so off that when I was told I had just two weeks left to live, I was devastated that I wouldn’t have reached my latest goal weight before I died and then came the realisation that I would rather die than continue with living the way that I was living, it was so freakin’ exhausting and it was painful. All rational thinking just goes out the window.”

Ms Thomas says it wasn’t until she was 27 and she found Neuro Linguistic Programming and hypnotherapy that she  “jumped in boots and all” to recovering.

“When your battle is 24/7, naturally your recovery needs to be 24/7. I literally had to condition myself to address every thought that came into my head and if it was from ED, I would have a comeback. It’s like your healthy self taking care of your ED self.

“Because ED was in control from the time I was 12, I was emotionally stuck in a pre-adolescence state and I didn’t want to die not knowing what it was like to live a life of freedom without being constrained by another being.”

Now being in a position to help other people overcome eating disorders, Ms Thomas says she feels like she “fought that long and that hard for a reason.”

“We all have that shared driven passion to make this residential facility happen and I am constantly reminded of how crucial it is that we continue to fight for those who can’t fight for themselves,” she says.

“We do this while offering hope. I know from my own experience that if Mum hadn’t continued to fight for me, I wouldn’t be here. Love and hope are such powerful things.”

Continue Reading
You may also like...
Related Topics: endED, Health

Epic run aims to raise $25,000 for dementia
A new dawn for power prices