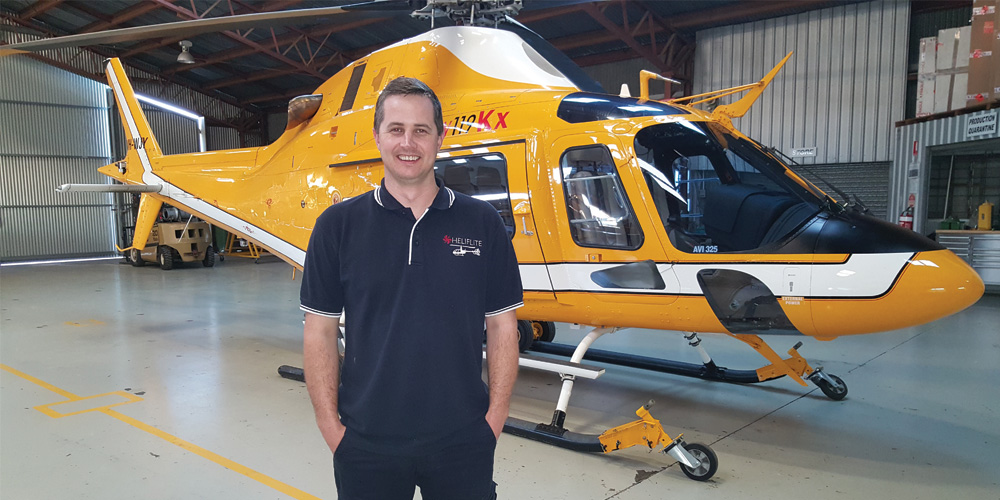 At the age of 31, Dylan Fahey owns his own business, employs 50 people, is not far off paying off his home in Rosemount, owns two investment properties and is a shareholder in two separate businesses. And it all began with an apprenticeship.

After completing Year 12 at St John’s College in Nambour, he started an environmental planning degree at Griffith University, but lasted only one semester.

“I wasn’t totally convinced I was ready for university or even wanted to go to university, but it seemed like the next step.

“I just wasn’t engaged in it. I think after 12 years of being at school I was ready to get out and work and see what the real world was like. I wanted to be out and about, I wanted to use my hands a little bit more.

“Sitting around in a classroom just didn’t sit well with me, so I deferred. I didn’t know if I was going to go back and I wanted to leave the option there.”

Fahey never did return to uni. He was offered a labouring job with a plumbing company in Brisbane and three months later, began an apprenticeship, completing his TAFE study at Nambour.

“I did a four-year apprenticeship with Tacoma Plumbing. I worked on the Sunshine Coast, Brisbane, Airlie Beach, Mackay… I travelled Queensland learning my trade.

“The appealing thing about doing an apprenticeship for me was that at least you were earning money while learning.”

Fahey finished his apprenticeship in 2007 and started his own company DYFA Plumbing, a commercial and residential plumbing company that has expanded throughout Queensland over the past 10 years. He’s now developing a program to train the future leaders of his company.

“Some people just love being outside every day,” he says. “For guys out there every day working on the tools, they love it.

“Australia is an unreal place to live because there’s no restriction on your opportunities. Whether you want to go to university or take up a trade, you have as much ability to succeed in whatever you choose as any other person – it’s just about hard work.

“None of my senior leadership team has been to university and they’re still a part of something great.”

But while Fahey is a true blue Aussie success story, apprenticeships are not the on-trend career choice in Australia today. The number of Australians taking on an apprenticeship has been on the decline over the past decade, with TAFE bosses accusing the government of forming policies that favour universities.

Undoubtedly, there’s an image problem associated with apprenticeships: Australians tend to see university as the best pathway to success and apprenticeships a good option for those who didn’t get the marks for uni.

This stigma is being addressed by organisations like the Business Council of Australia, which is calling on the Federal Government to modernise the apprenticeship system and make it more appealing to young people.

Chief executive of the Business Council of Australia, Jennifer Westacott, says “Too many kids are being pushed into university.

“Funding for universities and schools has soared over the last decade, but vocational education and training has gone backwards in funding. The number of apprentices in training has fallen by over 40 per cent over the last four years.

“That’s a difference of over 200 million apprentices who have missed out. If we keep letting this happen, there simply won’t be enough Australians with the skills we need for the future, especially in places like the Sunshine Coast.

“We need urgent action. Federal and state governments need to commit to using the Skilling Australians Fund to develop a new vision for the apprenticeship system that makes it more attractive for employers and learners.”

A spokesperson for the Department of Education and Training acknowledged apprenticeship numbers have declined in recent years, but said there are complex reasons for this: “The occupational structure of the labour market is continually changing due to a number of impacts such as technological change, a general trend towards occupations at higher skills levels, and within some industries a move away from tasks that can be undertaken through automation.”

The spokesperson said while digital disruption has many worried a robot will be taking their jobs in future, the VET (vocational education and training) sector could help provide a buffer.

“VET, through its close links to industry and opportunities provided through apprenticeships/traineeships, is well positioned to provide the relevant training as new skills needs and occupations emerge.

“There is a shared view about the need for the apprenticeship and traineeship system to play a key role in equipping industry and the workforce to respond to these changes.”

In the 2017–2018 Federal Budget, the government announced it would allocate $1.5 billion to the Skilling Australians Fund to be used from 2017 to 2021. With matched funding from states and territories, it says it will support up to 300,000 apprenticeships, traineeships, pre-apprenticeships and higher apprenticeships in Australia.

However, little detail has been given on how this will work and criticism has been levelled at the government for cutting TAFE funding.

Contributing to the underlying attitudes around apprenticeships are school guidance counsellors, who tend to favour university as the preferred option for students with good marks.

Caloundra aircraft maintenance engineer Chris Kaminski, 33, knew he didn’t want to go to university – but his guidance counsellor had other ideas.

“I wasn’t interested in going to university at all, much to the annoyance of the guidance counsellor at school,” he says.

“It’s just a normal thing to do – leave school and go to university. I didn’t listen.

“I don’t believe university is for everyone. At the end of Year 10 I was holidaying on the Sunshine Coast and my parents saw a training college advertising a six-month course.

“We went along and had a chat to them. They persuaded me to keep going to Year 12, to get my OP, but I didn’t look at it much after I received it. I wasn’t going down the route of university. After Year 12, I’d had enough of school and I was more of a hands-on person.”

Kaminski moved from Maryborough to the Sunshine Coast after graduating to complete a certificate two in aeroskills at the Queensland Institute of Aviation Engineering (no longer operating).

He finished the course early and worked with a respected engineer at Caloundra Airport for four weeks before being offered an apprenticeship.

“I worked for him for five years, got my licence within four years and then another opportunity came up at Redcliffe Airport, so I started working there for Heliflite in 2007.”

Kaminski is now the base manager of the Queensland branch of Heliflite, has travelled the world for work and undertakes additional theory and practical training each year, whether it be on a new aircraft type or new engine model, and is considering studying a business management course in the future.

“Trades are not for everyone but for me, it was the best choice,” he says. “I think people just get in their head everyone has to go to university to get a good career.

“The stigma is you must apply to university to get a good career and well paying job. I’m a big believer in getting a trade behind you and whatever extra training you want to do, you can always do it later.”

Kaminski employs school leavers and mature age students as apprentices and looks for people who don’t necessarily have top marks, but are good with their hands and show an interest in mechanics – like building computers or fixing cars or motorbikes as hobbies – and show they can buckle down and learn in short bursts.

“The four years of an apprenticeship is really hard in regards to the work load, education and social aspects,” he says.

“Your friends are at university, studying and able to go out, while you are working long hours. But after four years, you’ll be trade recognised and while other people are only starting out in their chosen careers, you will be well ahead financially and with real-life experience.”

Hairdressing is on the Federal Government’s skills shortage list, but while state governments have been paying training colleges thousands of dollars per student, many employers say they’re churning out worthless qualifications that leave many hairdressers unemployable.

Maria Faulder, owner of Suite Three Hair in Buderim won the Micro/Small Business Woman of the Year 2016 at the Sunshine Coast Business Women’s Network Awards. She says quality training is paramount to the success of the apprenticeship system.

“Our RTO (registered training organisation) is HATS, owned by Shelley Drane. She is the best educator in South East Queensland. Together, L’Oreal, HATS and I are training my apprentices to be the ultimate hair professionals in an industry where we have gained true credibility and respect as a really skilled profession that is regulated by the Australian Hairdressing Council.”

Today, she’s an award-winning business woman who will fly to the US in September to work as a stylist for New York Fashion Week.

“I have trained five apprentices since launching my business in 2008 while gaining a reputation for amazing colour work and being participants on over 40 Australian runways. One of them has gone on to achieve national recognition on L’Oreal Professional’s creative team.

“During the past nine years I have rewarded my apprentices with trips overseas to Bali and Thailand for hair industry conferences and I have secured places for them backstage at many national fashion events.

“I love to reach up high for opportunities to give to my apprentices in return for commitment and dedication.”

Faulder has also converted two school-based apprentices to full-time apprentice status over the past five years, saying the opportunity to offer this foot in the door for young people is very rewarding.

“The value of the Australian apprenticeship is gargantuan – to small business, to the future of any skill-based industry and of course to the apprentice’s future career.

“These young people bring enthusiasm and breathe new life into many businesses.”