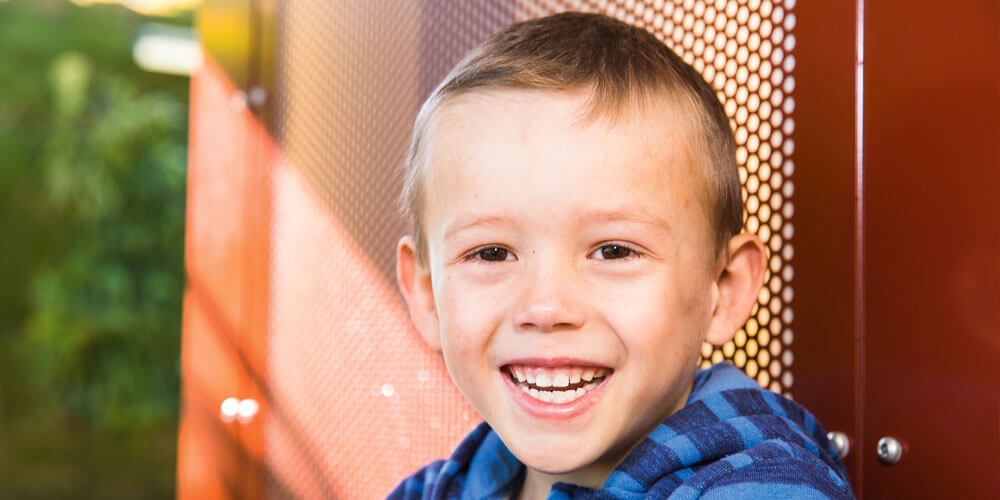 At first, doctors thought it might be anxiety at such a big change that was causing him to become lethargic and withdrawn.

But when one side of his face began to droop, Austin’s mum Sarah quickly took him to the hospital.

Their lives were never the same again. A CT scan showed Austin had a huge tumour in his throat.

Within hours, he was rushed to the Lady Cilento Children’s Hospital where he endured a series of tests and scans, which revealed he had Burkitt lymphoma – a rare and extremely aggressive form of childhood cancer.

Austin’s family was given the devastating news that the disease had already spread through his central nervous system and into his liver and kidneys, and that his chance of survival could be as low as 70 per cent.

Austin, who is from Maroochydore, had to endure multiple lumbar punctures, general anaesthetics and six months of intensive chemotherapy, resulting in countless hospital admissions.

The chemo made Austin so sick, he couldn’t eat or keep any food down.

He needed a nasogastric tube in order to keep his nutrient levels up and to stop him from losing too much weight.

At just six years of age, Austin was so scared about what was happening that his medical team decided to limit how many doctors were allowed in his room at one time, while his parents and the nursing staff worked hard to build back his trust.

As part of this, Austin enjoyed the distraction of the services provided by the Children’s Hospital Foundation including bravery beads, bedside play and music therapy.
He now no longer has a nasogastric tube, but his eating habits have been affected by his treatment. Good nutrition will continue to be a focus for him on his road to recovery.

The young Sunshine Coast boy is one of the faces of the Children’s Hospital Foundation and Woolworths’ Regional Wall Token Campaign, which raises funds for distractive therapy resources, interactive play equipment and toys at the Sunshine Coast University Hospital.

Children’s Hospital Foundation CEO Rosie Simpson is calling on people to purchase a $2 token from Woolworths until October 1.

Simpson says since the launch of the partnership began 30 years ago, more than $50 million has been raised to help fund lifesaving research, vital medical equipment and support programs for thousands of sick kids.

“Childhood illness hurts. It hurts the kids who must endure it and it hurts their families,” Simpson says.