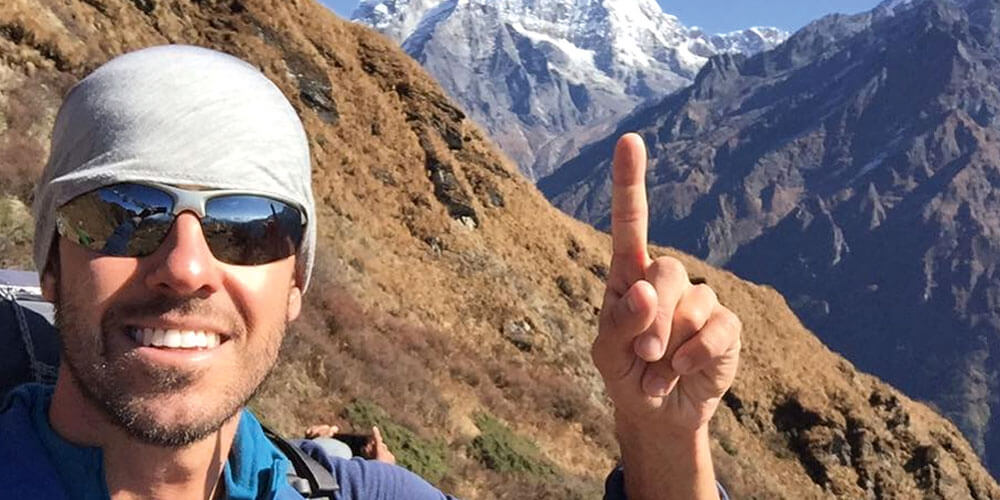 Rhys Greedy has conquered the Kokoda Track and knocked over Kilimanjaro, the Annapurna Base Camp in Nepal and France’s Mount Blanc on his extreme fundraising adventures, but it was the Himalayas that proved to be the toughest challenge yet.

The Caloundra paramedic set out to climb Mera Peak, the highest trekkable peak in the Himalayas, to raise money for the Queensland Ambulance Service Legacy Foundation, which supports the families of paramedics who pass away, with educational grants for the children who are left behind.

As if this wasn’t a big enough goal, Mr Greedy wanted to complete the trek in just 12 days, almost half of the recommended 23 days.

This is the third fundraising challenge Mr Greedy has undertaken. It is a passion that was born from his 2009 battle with Hodgkins lymphoma.

His health journey inspired him to raise more than $14,000 in 2015, when he climbed Mount Blanc in the Trek Towards a Cure for Lymphoma Australia.

The following year, he raised $21,000 in his Kilimanjaro for the Kids campaign and Mr Greedy set off early last month to complete the Peak for Paramedics.

But on November 7 at 5.44am, Mr Greedy says he was “humbled by the Himalayas”.

“It was at this point I made the agonising decision to abandon the remaining walk to the summit at 6214 metres, 262 metres short of my goal,” he says.

The day before, his hiking partner Kieran Ramsdell had called time on his journey and Mr Greedy had three hours of sleep in a tent covered with frost before waking at 1.30am to attempt the last leg of the journey.

“A combination of gale force winds, oxygen intake at 48 per cent, and minus-21 degree temps could only be fought against for so long. Despite my legend of a Sherpa’s best efforts to try and warm my hands, give me pep talks and almost drag me up with the rope we were attached by, with tears in my eyes I conceded defeat,” he says.

“I could literally see the summit, which made the decision a bitter pill to swallow at the time, but for the sake of a few metres, in that environment, the damage to myself could have been a lot more severe.”

After talking through the possibility of a chopper evacuation, Mr Greedy decided to walk off the mountain – a journey that took another three days.

A medical assessment once he was off the mountain found Mr Greedy had a lung infection and second-degree frostbite to his right big toe.

Mr Greedy says how his toe will fare long term is a “to be continued story”, but his campaign was far from a failure. He has raised $11,600 for QAS Legacy, surpassing his $10,000 goal.

“Down the track, I will finish what I started,” he says.

“I got a nice message from a veteran mountaineer who reminded me it would probably become boring if I was successful every time. I am relatively new to this game and have come to realise there is so much more than just the physicality of it.

“There are a huge range of factors to account for when you are in the nastiest part of Mother Nature, but it is all part of the challenge and I haven’t been deterred.”

In fact, Mr Greedy will be strapping on the gear again this month, when he travels to Ecuador to climb five consecutive volcanos in 16 days.

This is more of a bucket list item and an early 30th birthday present to himself.

Mr Greedy says he is already in the “homework stages” of determining what his 2018 fundraising challenge will look like and will announce the trek and the beneficiary in June.