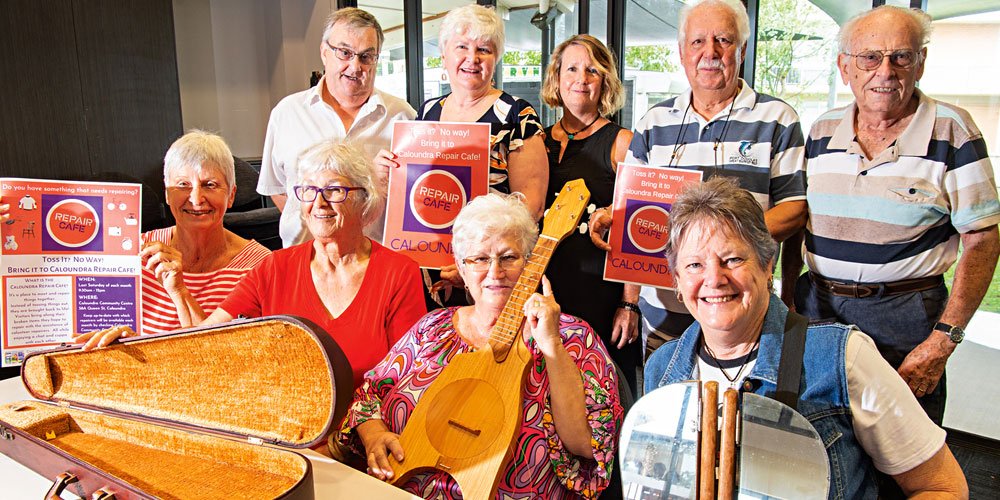 From the end of the month, Caloundra residents will have the opportunity to mend rather than dispose of broken items after Pelican Waters resident Dorothy Gillingham went to work and organised a local Repair Cafe.

Located at the Caloundra Community Centre, volunteers from various areas including  woodworkers groups and mens sheds have mobilised to donate their collective time and skills to bring your items back to working order.

Mrs Gillingham says she and her husband came across a repair cafe at a sustainability event in Adelaide some two years ago and were impressed with the operation’s practical waste reduction initiative.

“I believe in keeping landfill as low as possible,” she says.

Additionally, Mrs Gillingham admired the International Repair Cafe’s ethos of supporting a world where neighbours help each other to repair as many items as possible and to reduce waste.

With all this mind, Mrs Gillingham started making plans for a Repair Cafe in her home town of Caloundra. However, similar to many things, COVID forced them to put their plans on hold, but in 2021, with community support they’re ready to roll.

Neighbours certainly did the right thing in Caloundra when their community centre, together with volunteers, came to the party by giving Mrs Gillingham an enthusiastic response and space at the Centre to hold the Repair Cafe.

Mrs Gillingham says: “The purpose is to provide a congenial meeting place where people in our community can bring small household items to be fixed, mended and/or repaired so they aren’t thrown away, but continue to be used and loved.”

“This subsequently means that the item doesn’t end up in landfill. They do not have to buy a replacement, on both counts thus reducing carbon emissions from the production of new items and discarding of old, and ultimately reducing waste and helping with the preservation of our planet.”

Mrs Gillingham says she is also hoping young people will become involved and take pleasure in seeing their toys/bikes/clothes restored to good working order and being a part of the repair/mending process.”

WHEN: January 30 and the fourth Saturday of each month

Keep up-to-date with which repairers will be available each month by checking Caloundra Community Centre’s Facebook Page. Contact Dorothy to learn more:

This is a free service, but a gold coin donation is appreciated. Small repair items such as screws and nails etc will be provided, but bigger items will have to be purchased by the owner.

The rebirth of a violin case

Richard Poole is one of the volunteers at Caloundra’s Repair Cafe. His wife Denise Poole has written this story to show us how Mr Poole’s repair work changed the life of one violin case. 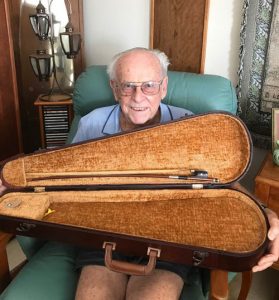 “One day in December 2020 when my husband  Richard was at his woodwork club, he was offered a very badly damaged violin case to repair – it looked as though it should be firewood,” Denise Poole recalls.

“The person who left violin case advised that he didn’t want it back and didn’t give any background history. However, Richard found it was made from cedar and estimated it to be around 100 years old, with that in mind he decided to start repairs.

“Over the next three to four weeks, he toiled away making steady progress. He solved the many dilemmas that presented along the way and now finally you see the finished object,” Mrs  Poole says.

“By Christmas when the family visited, the violin case was near completion.

“In some ways, the case spoke about the year that 2020 had been,” she says. That became the sentiment behind the thought of extending the life cycle for the violin case.

“The inside of the repaired lid was painted in white and the family members were invited to write a message about COVID-19 – in the style of a time capsule.

“They could write whatever they felt was appropriate for them, and as this would be covered by the plush lining it might never be seen unless some time in the years ahead it needed another refurbishment,” explains Mrs Poole.

“The case is now finished – beautiful – ready for another useful life. When I look at it, I feel hopeful that we can rebuild things that are broken. It takes time. They may not be same as they were before, but they will be useful and valued again. Yes,  it takes persistence, patience, knowledge,  and the acceptance that perhaps they won’t be perfect.”

Maleny Fix it Cafe is a social enterprise run from Maleny Neighbourhood Centre. The aim is to reduce landfill and encourage recycling and repurposing. All repairs are assessed and if fixable are repaired for a cost of $5 donation to MNC.

Maleny Fix It Cafe is run by volunteers and encourages social connection and aims to reduce social isolation. Due to legislation, repair of electrical goods is not currently undertaken.

Volunteers wanting to participate, should contact volunteer@malenync.org.au or phone to make an appointment with the volunteer coordinator on 5499 9345 between 9am and 3pm.

MOST COMMON ITEMS TO FIX

Due to the pandemic, Queensland Environment Minister Meaghan Scanlon says the government has pushed back the start of the single use plastics ban from June to September to allow businesses to adapt. The ban starts with items such as straws, stirrers, cutlery, and plates.

In March 2020, the government asked Queenslanders to decide the future of single-use plastic items and received a clear message.

“Almost 20,000 responses were received, with 94 per cent of submissions in favour of a ban, Minister for Environment and the Great Barrier Reef Leeanne
Enoch says.

As well as banning the supply and sale of single-use plastic straws, stirrers, cutlery and plates, the bill also provides a means for more single-use plastic like coffee cups, polystyrene cups, takeaway food containers and heavyweight plastic bags to be banned in the future, following public consultation.