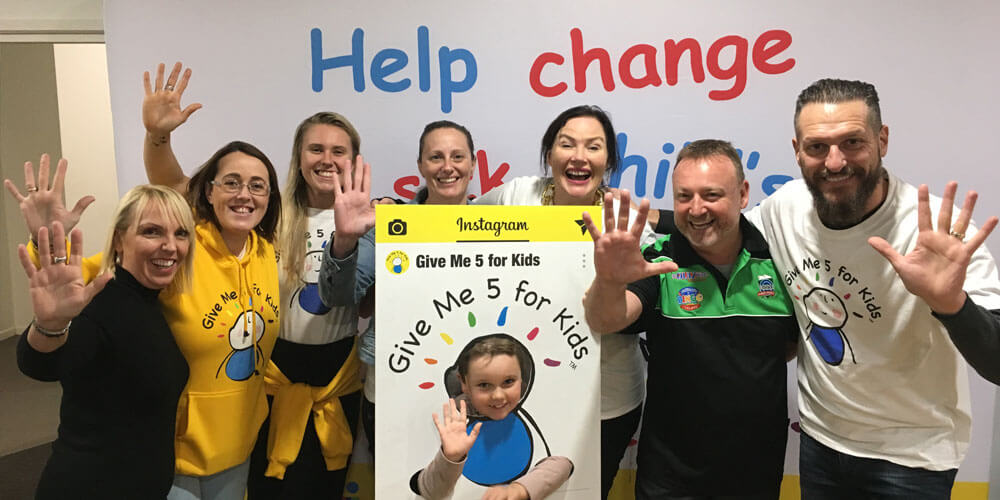 When the 92.7 Mix FM Give  Me 5 for Kids campaign  was launched 20 years ago, premature babies born on the Sunshine Coast were being ‘bagged’ while being transported to Brisbane for care, with  a nurse sitting beside them manually ventilating them with a valve mask.

It is a situation Mix FM breakfast announcer and passionate GM5 campaigner Caroline Hutchinson remembers all too well and it fuelled the fire for the inaugural campaign in 1999 to raise $25,000 for transport cots for neonatal transfers, which included ventilation machines.

The strength of the community shone through, with more than $86,000 raised in a month-long campaign that included multiple events, on-air auctions and a tin drive.

Ms Hutchinson says it’s a trend that has continued ever since. Last year, $606,000 was raised for affordable accommodation close to the Sunshine Coast University Hospital and thanks to builder Ausmar Homes, The House the Coast Built is already being built.

This brings the total amount raised since GM5’s inception to more than $5 million, every cent of which has provided much-needed equipment and support services for paediatric patients and their families in the region through beneficiary Wishlist.

GM5 is held in 35 locations across the country every June, but Ms Hutchinson says what the Coast achieves year after year “blows the rest of Australia away”.

“The Gold Coast has twice the population that we do, but we raise three times as much as them. We are just so proud to see some of the events and activities that have built a real following on the Coast – like the art auction – are being replicated in other locations to boost their fundraising capacity.”

Ms Hutchinson says one of the auctions she is “personally welded to” is Sam’s Pool. Mark and Tanya Martin place a Narellan Pool up for auction in honour of their son Sam, who was diagnosed with an aggressive form of cancer in July 2013 and died the following year at the age of eight.

“[The Martins’] generosity blows me away. They know the value of Give Me Five because they have spent a lot of time in the hospital and I am so humbled by anyone who could go through the worst thing imaginable and come out thinking about other people,” Ms Hutchinson says.

“It is people and stories like this that are the driving forces for everybody here at Mix FM. One man came up to me not long ago to thank us for the clown doctors we helped to fund … He was holding down his two-year-old, who was screaming as a nurse was trying to take blood from her and a clown doctor came into view and made her laugh and distracted her. You can’t put a price on that.”

Wishlist CEO Lisa Rowe says the clown doctor service is at the top of their funding priorities this year. “We need to fund the service for another two years and Mix FM’s Give Me 5 for Kids will dedicate at least $220,000 towards doing so, but we need  your help,” she says.

“In 20 years, the appeal has bought millions of dollars’ worth of equipment for the children’s ward, emergency and outpatient departments, ENT, the maternity and the special-care nursery  and operating suits.

“Children have watched TV for free in the Children’s Ward for 15 years, thanks to dollars dropped in Give Me 5 tins at local shopping centres.

“[These] are all thanks to charity art auctions, the Sunshine Coast Harley Owner’s Group Charity Ride and Diamond Lunches.

“Countless families have benefited from paediatric staff having undertaken paediatric training thanks to the appeal and every year, together as an exceptional community, we make our world a little better through the month of June thanks to Mix FM’s Give Me  5 for Kids.”

June 8: Live In The Park  2-6pm – Buderim Village Park  This inaugural event will bring together the community for an afternoon of entertainment, food, wine and good company. This will be an 18-plus event. Guest can set up their picnic rug on the grass to enjoy a full program of live entertainment.

June 11: Art Auction  6-9pm – Kon-Tiki building, Maroochydore  Head along and join in on an enjoyable evening at the annual Give Me 5 For Kids  Art Auction. There will be a bar and food available, alongside the work of renowned Sunshine Coast artists. Everything will go under the hammer, to raise much-needed funds. There will also be live and silent auctions on the night. Entry is free to  this event.

June 13: Cash Clean Up 6am-4pm  Mark and Todd will team up against Caroline and Sami to see which team can raise the most money for Give Me 5 For Kids. Donate when you see them or text to donate. The number for the boys’ team is 0437 371 371, and the girls’ team is 0437 371 371. At 4pm they will meet up to find out which team raised the most money in their donation buckets.

June 20: QuizzaMe Themed Event 6-9pm – Maroochy Surf Club  For the first time ever the 92.7 Mix FM team is hosting a Give Me 5 For Kids ‘Bogan QuizzaMe’ game show-style event with buzzers, all on a big screen. Come along dressed up in your best bogan gear as there are prizes up for grabs. It’s only $10 per player with tables/teams of six. Buy you  ticket at stickytickets.com.au/83458.

Auctions For a list of on-air auctions, visit mixfm.com.au.

Continue Reading
You may also like...
Related Topics: Charity, Give Me 5 For Kids, GM5K

Banding together for Bloomhill
Air museum needs support to soar