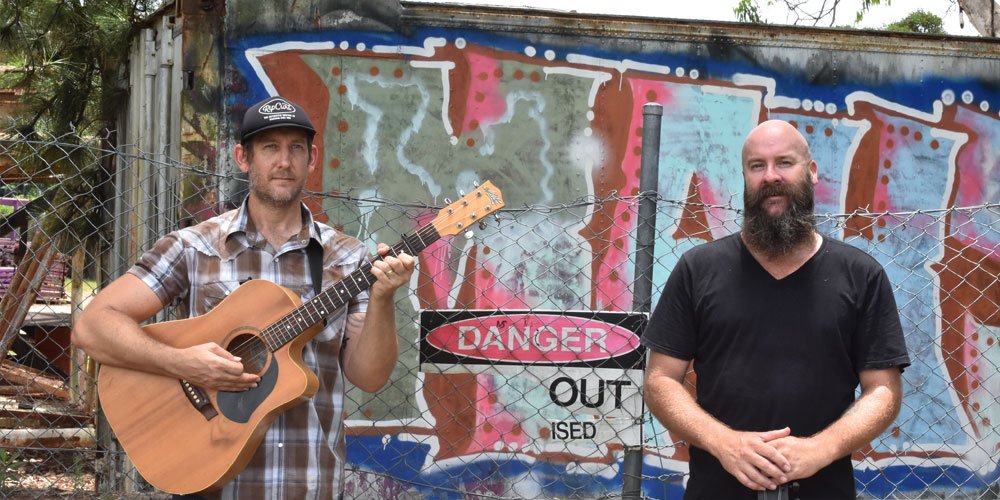 A broken wrist became the catalyst of change for a former school teacher now forging a career in the music industry.

Cam Cronk and Simo Taylor are the musical duo behind recently formed band Little Mountain, who came together almost by accident.

For Mr Cronk, his musical break came after an unfortunate bone break.

“I broke my wrist and as part of my rehab I was advised a nylon string guitar would be a great way to get dexterity back into [my] fingers and wrist,” Mr Cronk says. “So, I did it and I got taught four cords and it just went from there.”

With five years of solo gigging under his belt, the self-taught musician met Mr Taylor at a Kings Beach cafe. “Simo was a waiter at Coffee Cat, one of the cafes I was plotting along at with my solo gigs, and he was a bit of a fan,” Mr Cronk says.

“He was clapping between songs and we got chatting. He has a semi-musical past; he is also self-taught and has played in a few bands prior to this. We exchanged numbers and then we decided that in the COVID downtime, with all that spare time on our hands, we’d have a jam.”

Mr Cronk says the pair “clicked” instantly and have since been recording music and performing locally. They released their first single, Devil’s Jaded, in October at the Caloundra Mini Festival, where they took out the 2020 Caloundra Music Festival Local Limelight Award.

They released their second single, Suitcase Memories, on January 24.

There are also plans for an already-recorded EP to be released in the coming months, co-produced with Tim Hart from Aussie band Boy and Bear.

And the name? Well, both men are Little Mountain locals.

Mr Cronk admits that as two guys in their early 40s, “it was a challenge for us to get that out of our heads, but I think when it comes down to it, age is just a number, and music is music”.

“It’s worked a treat that we’ve both been dads as well. We both understand that family comes first.”

As for 2021, Mr Cronk says the duo will keep “grinding along” as they continue to grow.