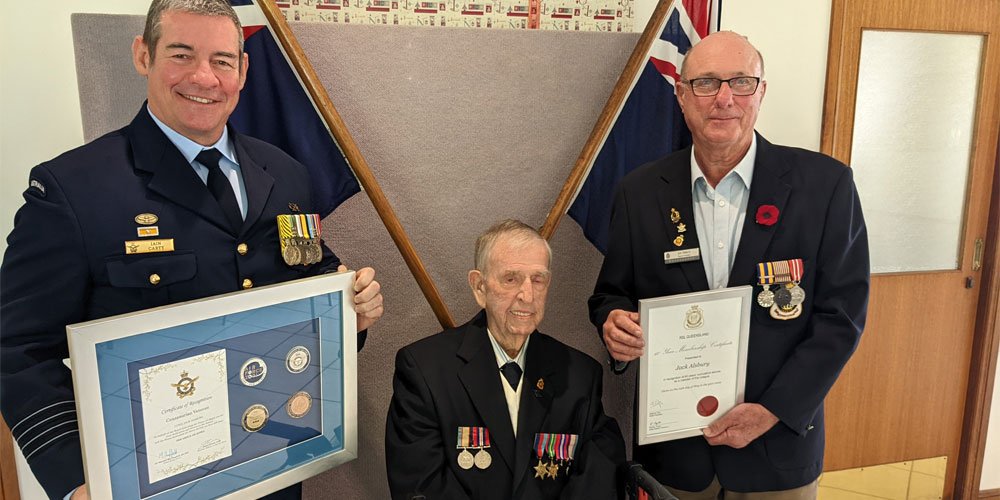 A World War II centenarian is celebrating a momentous milestone – one he shares with the Royal Australian Air Force.

After celebrating his 100th birthday on January 18 this year, Buderim’s Jack Alsbury is being recognised for his service to the RAAF, which is also celebrating a century in 2022.

Born in Ballarat, Victoria, at the age of 20 Mr Alsbury enlisted in the RAAF, going on to serve as a leading aircraftman in the No.1 Airfield Construction Squad in Papua New Guinea and Borneo.

“I am proud of my service in the RAAF and am extremely impressed that both I and the Air Force turned 100 in the same year,” Mr Alsbury says.

“I am grateful for the assistance and recognition they have given me and many other servicemen for many years.”

To commemorate his service, Mr Alsbury has been presented with framed Air Force centenary mementos after a visit from RAAF Group Captain Iain Carty from the Amberley base at Ipswich.

Maroochy RSL board member Jon Welch also presented Mr Alsbury with a certificate of recognition for his 60 years of RSL membership in Queensland. He has been a member of the RSL in Australia since 1944, in what is believed to be a record 78 years.

Mr Alsbury still lives at home by himself at EdenLea village in Buderim where he receives regular visits from the RSL welfare and assistance service through the Department of Veterans’ Affairs.

The veteran has marched every Anzac Day until this year and his proudest family moment was when he had four generations marching with him in 2015.

The keen Carlton supporter also enjoys regularly riding his three-wheel bike around EdenLea and is proud of the 8758 laps he has now completed.

Continue Reading
You may also like...
Related Topics: war veteran