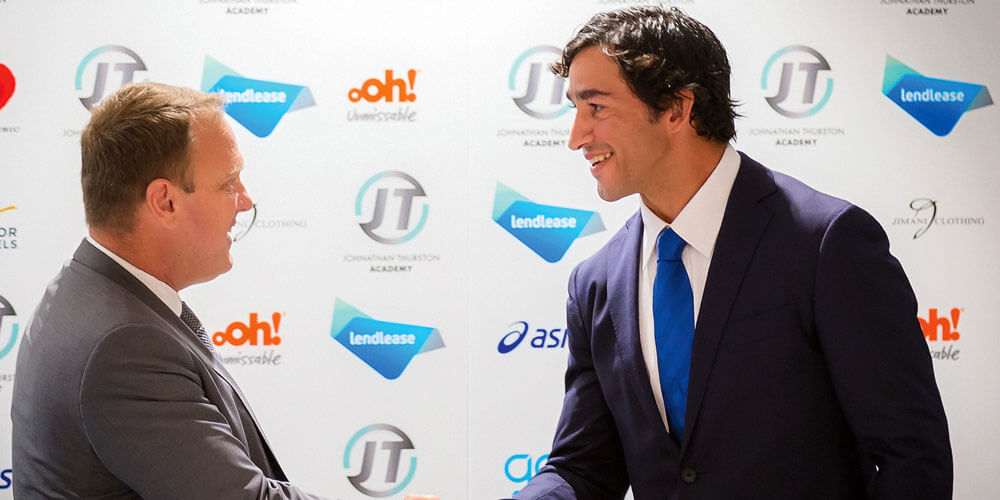 When Johnathan Thurston kicks a goal in front of 80,000 people, it’s not only skill and talent that gets him over the line. It’s self-belief and courage, and these are the qualities that underpin the JT Academy.

Launched in Brisbane in February, it’s the first organisation of its kind in Australia and not only offers employment initiatives but training programs aimed at health, wellbeing, sport and education with plenty of success already seen on the Sunshine Coast.

With JT at the helm, the organisation is inspiring young people to aspire to reach their potential in life and while all age groups are welcome to look for work through the academy, its primary focus is on 15- to 25-year-olds.

General manager Samantha Johnson says the week after its launch, 22,000 people visited the JT Academy website with most going to the employment section.

“The beautiful thing about the JT Academy is the ability to engage and attract genuine employers,” Ms Johnson says. “We’ve been overwhelmed by the number of good employers out there wanting to take employment back to basics.

“Lendlease is a major employment partner at the academy and our partnership with them is really about putting young people into jobs. They’ve introduced us to their subcontractors and project managers and we’ve had a lot of success on the Sunshine Coast with the Sunshine Plaza redevelopment.

“It’s important for people to understand we’re not an RTO [registered training organisation], we’re not funded by government in any way for employment.

“What we’re about is genuine job opportunities. We’re not about ticking boxes and we won’t work with anybody who wants to tick boxes. When there’s a job and an employer is looking for a young person, we find the person and make the introduction. It’s a free service; we’re not paid, we’re sponsored by organisations.”

As the majority owner of the academy, Mr Thurston isn’t just a figurehead – he is  a leader and a visionary and is passionate about leveraging his influence with young people to create a legacy.

“Johnathan is all about reward for effort for young people,” Ms Johnson says. “Johnathan wanted to have a legacy that was far beyond the football field and allowed  him to support, mentor or encourage young people to get on the path of success.

“It never stops. There’s always somebody’s life he has touched in the humblest way. We got one last week from a dad who said [Mr Thurston] was running late for his team bus, he’d lost his game, but he still stopped and shook his son’s hand and it made his night.”

Mr Thurston’s wife Samantha is one of the organisation’s ambassadors and is behind a big push towards employment for young women. Women’s focus groups are currently being conducted in Brisbane to find out what women really need in the workforce before the JT Women to Lead program is launched further down the track.

Another JT Academy ambassador who will no doubt prove popular with youth is local footy star Billy Moore.

“Billy will come to different workshops and tell stories of rugby league and the link with Johnathan and how important self-belief and courage are,” Ms Johnson says.  “Johnathan just loves him; he has huge respect for him.”

Ms Johnson says while the focus is currently on Brisbane, the Sunshine Coast and Townsville, the academy is a national organisation with big plans for future growth.

JT fans will have a chance to see the man in person when he visits the Sunshine Coast in October for An Evening with Johnathan Thurston at the Events Centre, Caloundra.

“Those shows are amazing,” Ms Johnson says. “He did one on the Gold Coast last year and it gives you goosebumps listening to his story. You really get to hear his story in depth.”

As an integral aspect of indigenous culture, Ms Johnson says storytelling is the way Mr Thurston connects with his audiences and is how JT Academy also connects with young people.

“We’re not trainers, we’re not educators. We’re about inspiring young people and we do that through storytelling.

“We have a huge indigenous job seeker database and the power of Johnathan’s engagement through his culture is just unbelievable. It’s a big part of what we do.”

Take a seat
What’s really behind the obesity epidemic?