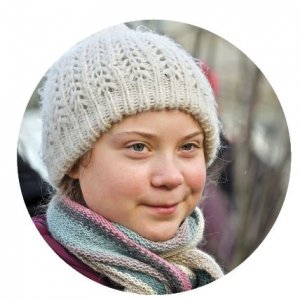 “My name is Greta Thunberg. I am 16 years old, I come from Sweden and I want you to panic. I want you to act as if the house was on fire.”

So began an emotional speech at the April 16 meeting of the European Parliament in Strasbourg, where a quiet girl who was diagnosed with Asperger’s syndrome, obsessive-compulsive disorder and selective mutism as a child, scolded officials for lack of action on climate change. Her voice shaking as she fought back tears, she pleaded: “The extinction rate is up to 10,000 times faster than what is considered normal, with up to 200 species becoming extinct every single day. Erosion of fertile topsoil, deforestation of the rainforest, toxic air pollution, loss of insects and wildlife, acidification of our oceans… are all disastrous trends.”

She was given a 30-second standing ovation for a speech that cut right to the core of the problem and made even hard-hearted politicians well up.

Ms Thunberg began her school strike in August 2018, protesting outside the Swedish parliament in Stockholm and attracting widespread media coverage. She is credited with initiating the school strike for climate change movement that formed in November last year and surged in December after the United Nations Climate Change Conference.

On March 15 this year, an estimated 1.4 million students in 112 countries joined her in a student strike to send an urgent message to our leaders: we need to act now.

On International Women’s Day, Ms Thunberg was named the most important woman in Sweden and in April, Time magazine named her one of its 100 most influential people of 2019. She has also been nominated for the Nobel Peace Prize and if she wins later this year, she will be the youngest person in history to receive it.

Ms Thunberg has inspired a worldwide movement of student strikes that is growing in momentum, forcing our leaders to sit up and take notice of the world they are leaving behind for future generations.

Australian grassroots movement, the Student Strike 4 Climate, began with its first strike in November last year, with students in the regional Victorian town of Bendigo kicking things off with a strike that comprised 15,000 students in 30 locations. The students held another strike in March comprising 150,000 people, which was 10 times larger and the biggest climate mobilisation in Australia ever.

“It was a huge success,” says Shellie. “Overall feedback afterwards was overwhelmingly supportive. People were really inspired by the event that took place. It would have been nice to have more media coverage, but we were happy with the turnout and I would have been happy if it had just been me and two others.

“It was quite strenuous to organise and it did take a lot of time and effort, but it was definitely worth it. This cause is THE cause – we have to fight for our future. It was a sacrifice I was happy to make.”

Last Friday, more than 70 events took place at federal MPs’ offices in the lead-up to the election to warn future leaders young people expect real climate leadership in this election and beyond.

“We held it before the election to show we are still thinking about what’s going on and we’re still putting pressure on,” says Shellie.

A spokesperson for the national Student Strike 4 Climate organisation, Charlie Wood, says the students have three demands: stop Adani, commit to no new fossil fuels and commit to 100 per cent renewable energy by 2030.

With Environment Minister Melissa Price giving the green light to Adani’s groundwater management plan in April, the project is a step closer to a full green light, something the students are not happy about.

“There aren’t many words you can say as to how disappointing it is,” says Shellie. “It’s an extreme feeling of overwhelming anxiety. I don’t see how Australia can move forward in the future with the approval of such a catastrophic coal mine near our precious Great Barrier Reef. It’s really a backwards step for Australia’s future.

“All we can do is keep enforcing people power. There are misconceptions about the jobs it’s going to generate. The mine is going to be fully automated in a few years and this has been proven in court.”

The student strikes have drawn criticism from Australia’s leaders, with Prime Minister Scott Morrison calling for “more learning in schools” and “less activism”. Opposition leader Bill Shorten said “kids are allowed to have an opinion” but should protest outside school hours.

“I think holding a strike outside school hours defies the purpose of having school strike,” says Shellie. “The word ‘strike’ indicates we’re striking for something. To me that argument is null and void.

“As long as we have this issue and we feel our government isn’t making enough change, I’ll be fighting for mine and my family to come’s future,” says Shellie.

According to the Intergovernmental Panel on Climate Change, we are less than 12 years away from not being able to undo our mistakes. Ms Thunberg says, “In that time, unprecedented changes in all aspects of society need to have taken place, including a reduction of our CO2 emissions by at least 50 per cent.”

“The teenagers who kicked it off last year were 100 per cent inspired by Greta,” says Ms Wood. “But they were also motivated by some of the quite scary projections from the IPCC report last year saying we only have about a decade to turn this crisis around.

“Hearing that and seeing the political inaction from politicians, this is something they can do. They can’t vote but they can take to the streets and take action to motivate politicians to act.”

According to a ReachTEL poll commissioned by the Australian Youth Climate Coalition (AYCC), the majority of Australians (54 per cent) support the student striker’s demands.

“In March, 150,000 people from all walks of life took to the streets to stand with students and demand meaningful action on climate change, including stopping Adani’s coal mine,” says Kelly Albion, campaigns director at the AYCC.

“It shows people are looking for climate leadership, they are fed up with inaction and they’re ready for a bold vision for what our future could look like.”

Other key findings of the poll include:

“While the internal divisions within the Liberal and National parties over coal are plain for all to see, these results send a clear message to Labor, too,” says Ms Albion.

“This election campaign, all parties need to state their position on coal and climate.

“Chaos from the Coalition, and silence from Labor is not going to cut it with the community, who are demanding real action.” 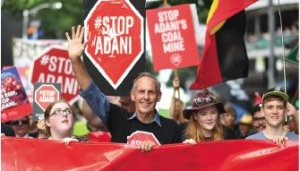 The anti-Adani protest convoy which outraged locals in a central Queensland town near the proposed Carmichael coal mine is expected to continue to the nation’s capital.

It comes after a weekend in which many businesses shunned those opposed to the proposed Carmichael mine site, which is more than 170 kilometres from Clermont.

The town’s three pubs refused to serve the visitors and a sign was hung from a hotel which read, “go home and turn off your power and walk”.

Another read, “Mr Brown and ‘Stop Adani’ protesters, you may have travelled far and wide but you won’t get food inside”.

Grand Hotel publican Kel Appleton told AAP the town felt it had to organise a response to the protesters by shunning the convoy. He said many in Clermont supported the proposed mine and the jobs it is expected to bring the region.

“We still get treated like we’re a bunch of hooligans but we’re not, like I’m half proud of being called a redneck. We probably are, we live out west, there’s graziers, there’s cotton farmers,” Mr Appleton said.

While supporters are worried about missing out on jobs if the mine doesn’t go ahead, Mr Brown claimed the “jobs alarm” was greater on his side of the debate, referring to 64,000 jobs on the Great Barrier Reef that were threatened by new coal mines.

Asked how the proposed mine was a threat to the reef Mr Brown said: “The mine is symbolic of that dying process [the burning of fossil fuels] continuing”. Stopping the mine is symbolic of we human beings having the common sense and good grace to go to the cheaper alternative of renewable energy.”

Mr Brown said the convoy wasn’t finished and would continue to arrive at Parliament House in Canberra on Sunday.

– By Nicholas McElroy in Brisbane, AAP