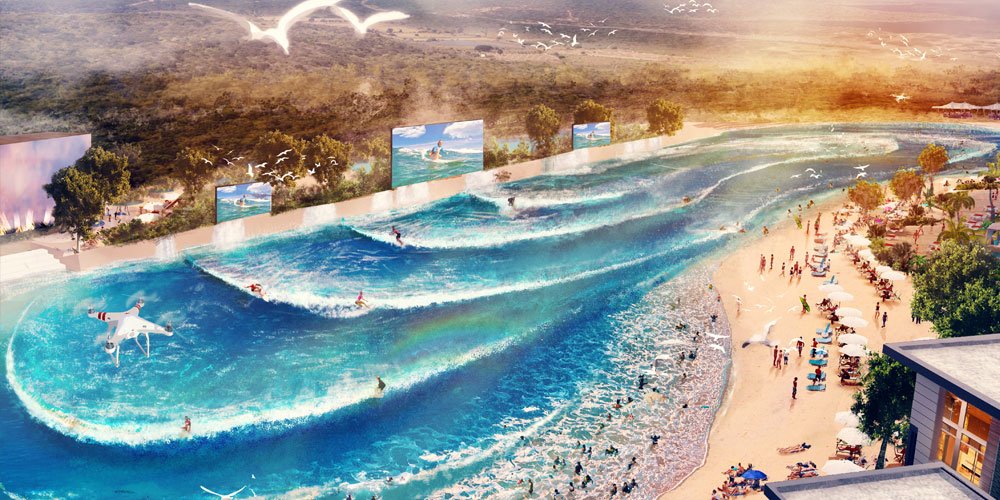 A $130-million water-themed tourist attraction is almost ready to roll on the Sunshine Coast, with hundreds of jobs expected to flow.

Elements include “multi-generational’’ one to four-bedroom villas and glamping, free fall, raft and tube slides up to 14-metres high, food and retail, a microbrewery, open-air cinema and water-based activities, including stand-up paddle boarding and kayaking.

Managing director Bradley P. Sutherland says that after five years of hard work and millions of dollars invested, the project has reached a major milestone.

“What we have just lodged are plans for all the key infrastructure … bulk earthworks, civil works, major engineering … all the big stuff, to light up the whole site’s 25 hectares for construction,’’ Mr Sutherland says.

“It is very exciting and so much is about to happen.

“What we are doing will be great for the local economy during the construction phase and then deliver many ongoing benefits.

“Once fully operational, it is estimated that Actventure, Invigorate Resort and Endless Surf will support some 320 jobs, many suited to the Sunshine Coast’s young people.

“The construction wages bill alone over the life of the project is expected to be more than $30 million and we will be generating some 364 construction jobs, or an average of 150 FTE workers for each year of construction.’’

Sunshine Coast Council will now have 45 working days to look at the infrastructure plans and then the more detailed design work on buildings
will follow.

Mr Sutherland says much already has been done on this and he hopes the detailed design would be signed off by the end of September.

“We could be coming out of the ground by November with early bulk earthworks.

“We want to work on many of the elements simultaneously and open everything at Christmas in 2023.’’

The “cocooning’’ or staycation boom related to COVID-19, and Brisbane and southeast Queensland’s coup in securing the 2032 Olympic Games, are expected to deliver a major boost to the attraction.

So, too, will the region’s anticipated growth. An economic report revealed future population growth would continue to be focused on the nearby Aura and Harmony communities, as well as within the Beerwah East future growth area, to which the Invigorate Resort will be a key local facility and major attraction.

“For residents of these growing communities, the Actventure water park and Endless Surf will be closer than local beaches, whilst Invigorate Resort will provide accommodation opportunities for visiting friends and relatives,’’ the Urban Economics report says.

A Sunshine Coast Council spokesperson says the Actventure water park proposal on Steve Irwin Way has a number of land use approvals in place and two current applications under consideration.

“In April 2015, council approved the first application to create the Sunshine Coast Water Park Master Plan over the site,” the spokesperson says.

“Bulk earthworks and a number of land use applications have since been approved, including a resort complex and tourist attraction.

“In accordance with council’s approval and before construction can commence, a number of further permits and infrastructure is required.”

It is applying for a material change of use that would allow two rural-zoned parcels to be used for tourism.

The Public Notification period, where people can make submissions, is underway.