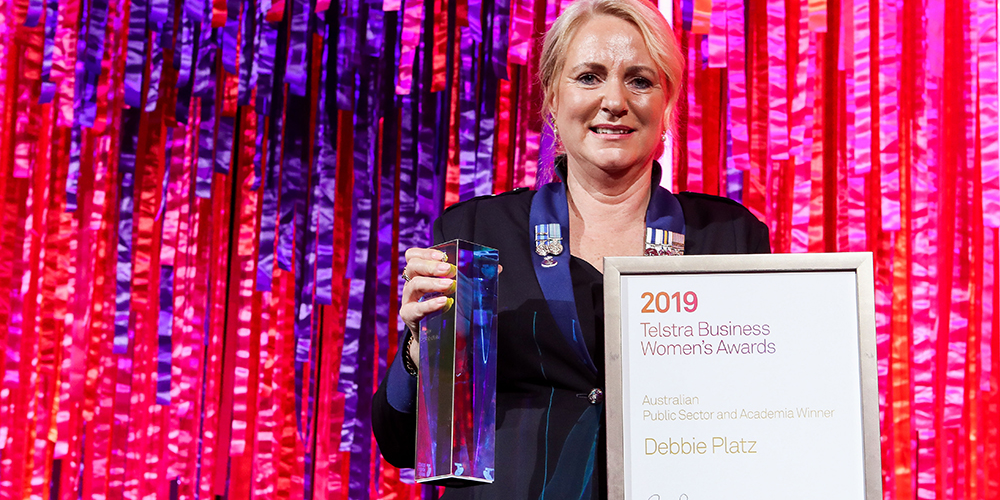 Debbie Platz is softly spoken, calm and composed. Her voice is not that of a toughened, battle-weary police officer who has seen the worst of humanity. Her words are measured but her spirit is kind, generous and full of conviction that her work is making a difference in the world.

The University of the Sunshine Coast alumnus recently won the Public Sector and Academia Award at the 2019 Telstra Australian Business Women’s Awards for her work fighting crimes such as cyber attacks, people smuggling, and child exploitation.

After more than 30 years with the Queensland Police Service (QPS), including 18 years on the Sunshine Coast, she accepted the role of Assistant Commissioner with the Australian Federal Police (AFP) in 2017 and has been commuting back and forth between Canberra and her home in Mooloolaba.

The award is a much-deserved acknowledgement. “It was lovely and I was very proud and honoured,” she says. “I was lucky to have my husband and three children there and it was one of the first times I’ve seen my husband cry. It was nice recognition not just for me, but my family and friends – they’ve had to lose a lot along the way, with me not being there for important events because my work has taken me away.”

The Telstra award is the latest in a string of awards Assistant Commissioner Platz has received, including International Female Officer of the Year 2016 from the International Association of Women and Police.

She says she had planned to turn down the job with the AFP if it was offered to her.

“I never envisaged actually leaving Queensland. It was a really hard decision. I had done 30 years in Queensland and had a trusted network of family and friends.

“But when I started talking to the Commissioner of the AFP and he told me about the type of work I’d be doing, I accepted. It involved a lot of the things I’m really interested in – I have a big history in Queensland of working in child exploitation units.”

“The statistics are horrible to say the least, with the amount of Australians who are watching online sexual abuse and torture of children,” she says. “Just as you would order a meal online, Australians can look up a menu, see what they want to watch, what age and gender of the child they want this abuse to happen to, when they want to see it and how they want to see it. They can watch the rape of a young child for about $40. It’s horrendous but that’s what a lot of Australians are doing on a Friday night.

“Predominantly the children are being abused offshore and they live stream it, so it makes it harder for us. We might catch one person and they might be responsible for abusing 30 or 40 children.

“Every day we get reports, mainly from overseas, of Australian IP addresses that are downloading child exploitation material. Each of those files could contain one image or a file of 100,000 images. They say on average each paedophile, if we were to take their computers, would have 168,000 files of child exploitation.”

Assistant Commissioner Platz has seen the worst of these videos and has staff members whose role it is to “do nothing all day every day but sit and watch these videos”.

To help with the psychological trauma they endure, these officers go through a program of graduated exposure so they don’t see the worst videos straight away.

“We have the teams assessed every year to make sure they’re coping,” she says. “We wrap around people. It’s not always the worst ones that stay in your memory. For me, there are only a couple I have a really vivid memory of. There’s a street on the Sunshine Coast I will never drive down. I don’t want to remember what I saw of what happened to that child.”

Assistant Commissioner Platz says while she is a resilient person, the way she copes is to continue focusing on the next child or the next case, rather than dwelling on the past.

“I think back to why I joined policing in the first place. I wanted to make a difference and wanted to help the community – even if I can help save one child, that’s something.”

Sir Elton’s arrival: a whole new ball game
Nowhere to go, nothing to do