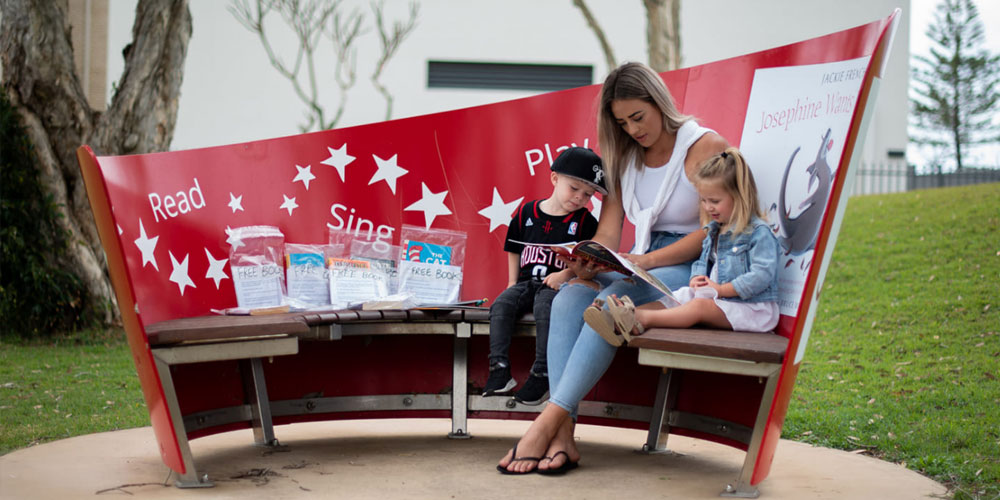 A treasure hunt with a difference is taking the Sunshine Coast by storm and putting more books into the hands of children at the same time.

The Look For a Book trend, which has been operating throughout the US and the UK for a number of years, has finally reached Coast shores.

Alex Street Library founder Sue Perry and a host of other Sunshine Coast street library operators joined forces to launch the Look For a Book initiative earlier this month, hiding dozens of books in parks around the region.

The volunteers place a children’s book into a reusable Ziploc bag with a note stating that the finder can choose to read the book and leave it in its place, or take the book home and treasure it.

Ms Perry says a number of families who have found books have posted their finds on the Sunshine Coast Look for a Book Facebook page, which now has more than 800 followers.

“The utter delight on the kids’ faces as they find something special and unexpected while they are outside is priceless,” she says.

“I have tears in my eyes reading some of the posts from parents who have found books with their kids. One little five-year-old told his mum, ‘This is the best thing that’s happened to me today’.

“It has inspired so many people to get on board and I’ve heard from so many mums, grandparents and teachers who are preparing to do their own book drops. It’s almost as if they are as excited by the thought of doing the drops as the kids are to find the books.”

Ms Perry describes the initiative as an “outdoor adventure game for kids”.

“It’s an open game and it belongs to the community. Anyone can look for books and anyone can hide books anytime in public spaces that are kid-friendly,” she says.

“We encourage people who do their own book drops to post a photo up on our Facebook page so that others can know where to find them. I’ve even heard of children who have found a book and been so excited by it that they go on to organise their own mini drop with their parents.”

For the group’s first ‘Big Drop’ in November, a small team of six people hid books from Marcoola down to Kawana.

They are already co-ordinating another Big Drop event on December 7 and have 17 volunteers on board ready to hide more than 200 books between Noosa and Caloundra as well as out to Maleny.

Ms Perry says it has cost her only $100 to set up this incredible treasure hunt, with all of the books being donated by Coast families in excellent pre-loved condition, ready to go to new homes. “I am very excited to see how fast it’s grown,” she says.

“It’s great to see anything that encourages kids to read books. It’s free, it’s getting them outdoors and it’s embracing things like sharing if the kids choose to re-hide the books after they have enjoyed them, as well as recycling with the reusable bags and keeping the books out of landfill.

“Often parents are sitting there just letting their kids play on the same park equipment, but I’ve actually seen children find books and run back excitedly to their parent, who might be on their phone, and they then have this beautiful time where they are sitting in the park reading a book together.”

Ms Perry encourages everyone to get on board with Look For a Book, either as seekers on the hunt for a literary treasure, or as hiders who are ready and willing to place books ready to be found.

To begin your journey, head to the Sunshine Coast Look For a Book Facebook page.