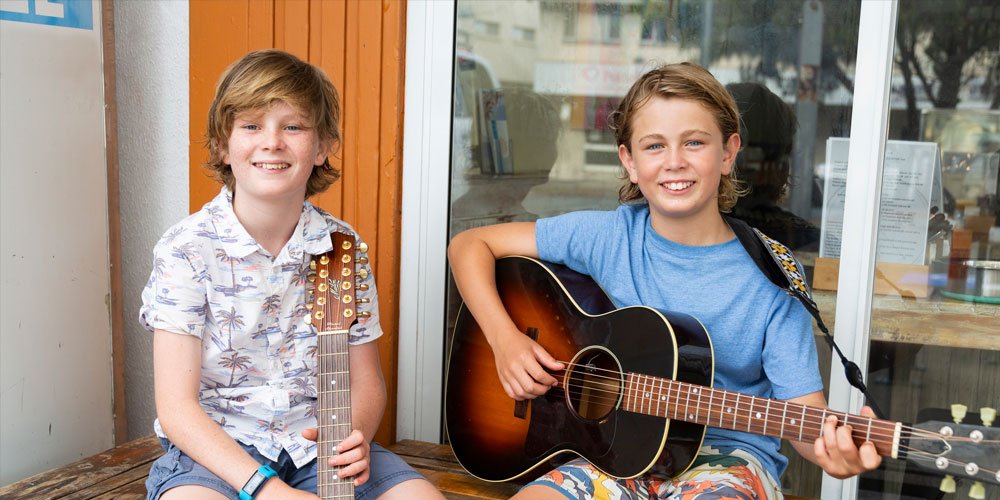 You may have seen them busking around the Coast, two kids on guitars singing and playing their hearts out to raise money for the bushfire appeals. They are Frank and Louis Martin from Currimundi, two kids with hearts of gold and musical talent in spades.

For now, they’re rapidly building a fan base and have raised $3800, which they’re donating to the Rural Fire Brigades, WIRES and the Red Cross.

“We saw lots of other buskers were raising money so we thought it would be a good idea to try,” says Frank. “We went to Mooloolaba one night and we made $1500 in two or three hours.”

The brothers have since expanded their territory and now busk at Maroochydore, Caloundra and the Twilight Markets at Noosa, as well as Mooloolaba. They’ll be busking at the Noosa Festival of Surfing in March and have been invited to busk at the NightQuarter at Birtinya. They’re also getting booked for cafe gigs and appear to be well on the way to realising their dream of a career in music.

“We’ve been learning guitar since he was seven and I was six,” says Louis. “I also get taught by a singing teacher called Toni Zaffa. We’re hoping to become musicians when we’re older and we want to start a band and stuff.”

Ms Zaffa says she believes the duo has a big future in music ahead of them.

“Louis is the main singer and he doesn’t sound like anybody else I’ve heard. He has an incredible feel, a beautiful soulful feel. I can teach him any genre… He’s so unique – both of them are. They’re going to go through the roof.”

The boys’ mum Eva says she and her husband are happy to do the hard yards and drive them to their gigs. “It’s lovely to watch them play and perform. I just want them to do something they love and they seem to enjoy this a lot so far. There are some very generous people out there. It was amazing to us that strangers from the US and Europe found their posts and donated.”

The brothers post videos of their performances to their Facebook page and while they’ve so far been doing covers, they’re now writing their first song together.

“It’s about cool kids at school and how others are left out,” says Frank. “It’s acoustic folk. It would be awesome to play it at our own shows one day.”