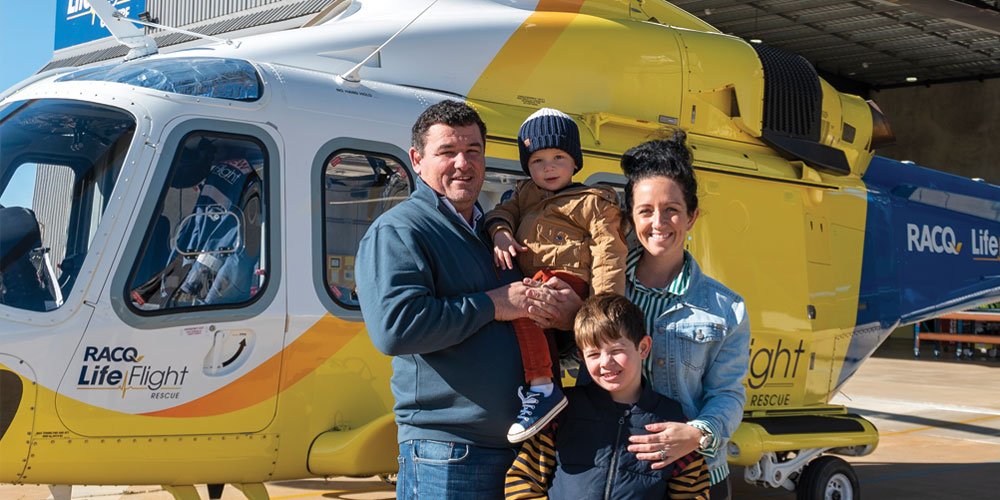 The Carmichael family knows just how important the work of the Sunshine Coast RACQ LifeFlight Rescue service is. Their little boy, Sonny, required urgent transportation care from Toowoomba to Brisbane when he was very unwell about a year ago. Mum Petrea grew up on the Sunshine Coast and the Carmichaels are big supporters of RACQ LifeFlight and the annual charity ball.

The local community has continued to rally around the LifeFlight Project Renovation Rescue project as fundraisers reveal the organisation is halfway to achieving its goal of $84,450. The transformation is set to take place later this year and will see changes to the medical storeroom and renovations to the hangar space. The new renovated rescue base will assist in the improvement of being able to facilitate internal training – both flight and ground based.

LifeFlight’s Director of Aeromedical Services, David Donaldson, says the function of the building has evolved over the years and this project will properly fit out the office and other facilities, to suit current operations.

Foundation executive director Kim Sutton says, “Whilst the larger renovations still need more funding, other parts of the transformation project can start taking place for smaller refurbishment wishlist items. Some of the requirements are being able to be purchased immediately.

The planned upgrade is timely for the local base, which completed 505 missions in the 2018-2019 financial year, making it one of the organisation’s busiest bases.

“The recent financial year was action-packed for the Sunshine Coast crew. In that time, they carried out missions including airlifting critically injured people from car crashes, rescuing hikers from mountains and transferring sick patients to hospitals, that offer high levels of care,” Mr Donaldson says.

“The end of last year continued to be busy for the Sunshine Coast crew and we expect this to continue throughout 2020.”

Ms Sutton, says, “Locals who have already donated a significant amount to the project recently gathered to celebrate the halfway point of the LifeFlight Foundation’s fundraising goal and have encouraged other people in the community to help do their bit.

“The Sunshine Coast Base renovation project is a wonderful opportunity for the local community to get behind their local aeromedical rescue service. The impact of each donation is clearly visible, with donors able to see the improvements their gifts make to the base, as well as having their donations proudly recognised on the wall of the base, for years to come. The community’s support is very important to us and highly valued.

“So far, $47,850 has been raised towards Project Renovation Rescue,” she says.

Mr Donaldson says the Sunshine Coast base is one of the busiest RACQ LifeFlight Rescue bases around Queensland. “Our helicopter crews are at the hangar around the clock, every day of the year, to make sure they’re ready to respond to emergencies, as quickly and efficiently as possible.

“The upgrades will be very important for the team that works at the base. While the crew team is often in the public eye, there’s also a team of people working hard at the base to support the operation, including engineers, administration and fundraising staff.”

To find how you can assist with the project, or to donate, visit lifeflight.org.au/project-renovation-rescue.

Continue Reading
You may also like...
Related Topics: LifeFlight

Creative women of surf join forces for exhibition
On guard