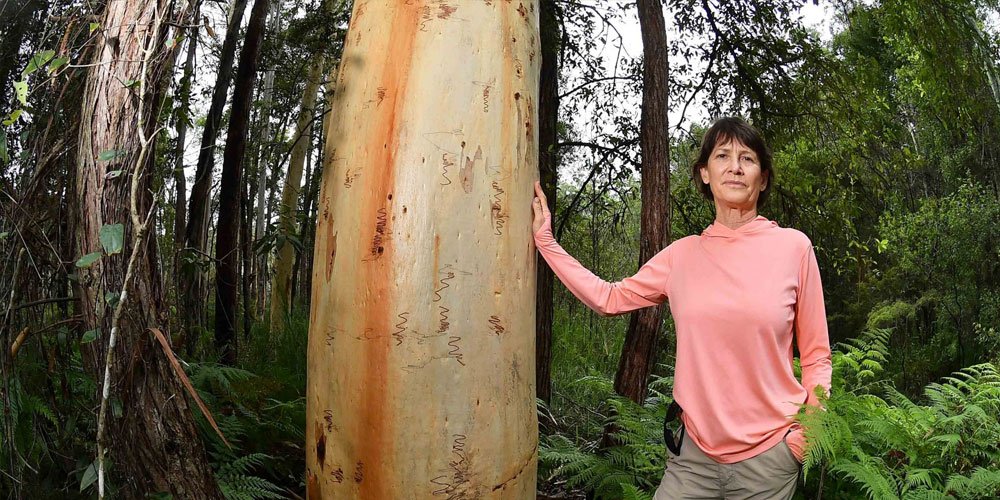 Teena Chumbley and others are fighting to save a hinterland forest. Image: Patrick Woods

Thousands of people are joining an eleventh-hour campaign to save towering trees from imminent logging in popular recreational bushland in the region.

The state government plans to “harvest” native hardwood from Ferny Forest, a 130-hectare section of Beerwah State Forest near Landsborough, just as it’s poised to become a protected area.

The picturesque park is loved by mountain bikers, runners and walkers who enjoy its 10-kilometre single-track trail looping through diverse tall trees, with an understory of ferns and native shrubs like banksias.

The forestry department has announced plans to cut down “selective” hardwood natives for use as power poles, sawlogs, girders and landscaping logs.

It is believed there are hardwood trees up to 60 years old in Ferny Forest, which has been a state forest since 1874 and sits on the banks of Ewen Maddock Dam near Mooloolah River National Park.

The area is considered prime habitat for koalas, which have now been listed as endangered, and campaigners say there are 190 plant and 53 threatened animal species.

The controversial log harvest is planned for this year, which is a couple of years before timber-getting is due to end in native bushland in southeast Queensland.

From December 31, 2024, timber production will stop, including in Ferny Forest, under the SEQ Forests Agreement struck in 1999.

Save Ferny Forest spokeswoman Teena Chumbley says the state government is trying to squeeze in one more round of logging before the area gains protection.

She says people cannot believe that a cherished haven of trees and native animals may be subject to logging in these days of environmental awareness.

“Under the forestry code, 50 per cent can be logged. Will they log 50 per cent? Will it be less?” asks Ms Chumbley.

“Even cutting one tree has a big impact and changes the area.”

Residents have since formed an action group, set up Save Ferny Forest and Save Beerwah State Forest Facebook pages, launched a website and started a
Change.org petition which has garnered more than 20,000 signatures.

In the first week alone, some 10,000 people joined the online campaign.

Member for Caloundra Jason Hunt is telling concerned locals he has raised the issue with the Minister Mark Furner and indicates that “as the local MP I do not support it”.

“I understand that there is a process that needs to be followed and I’ll be doing whatever is required to make sure that the voices of my constituents are being listened to,” a statement from Mr Hunt reads.

It remains unknown how many trees will be felled, or when it will occur.

For more on this story, visit sunshinecoastnews.com.au.

Continue Reading
You may also like...
Related Topics: Beerwah, environment

Easter is a time to support local
Finally time to party