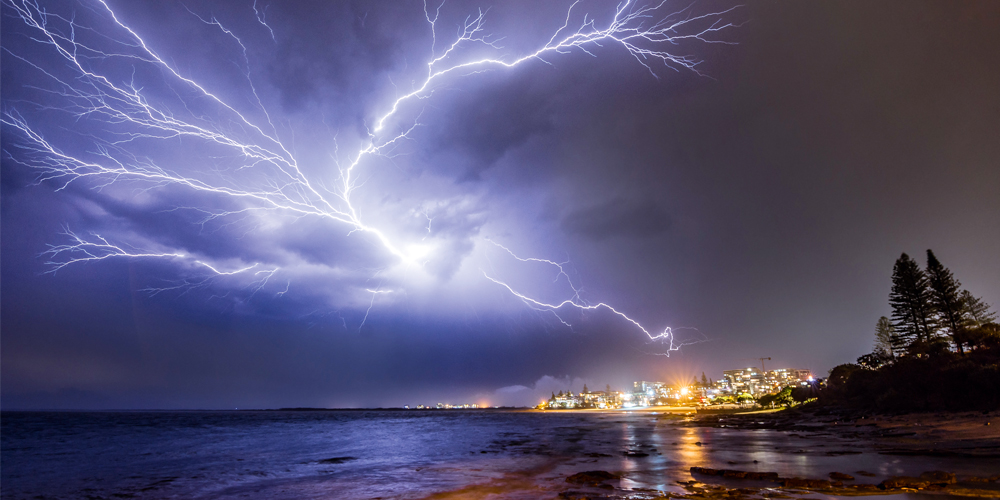 With a flash of lightning and a rumble of thunder, Mother Nature unleashed a storm that began to quench the thirst of the drought-addled earth.

The Sunshine Coast had seen no substantial rain for three months, placing the region in extreme danger of bushfires at the peak of the fire season and large fires took hold between the Bruce Highway and Aura, and west of Coolum as a result.

As if on cue, what seasoned storm chaser and weather forecaster Jeff Higgins called a “rain bomb” hit, signalling the end of bushfire season and propelling the region into storm season.

The months between October and March are when storm chasers like Dicky Beach resident Phil Staatz are in their element.

Homes with the thrill of seeking out storms in a bid to capture the perfect image.

“I’ve had a fascination for storms ever since I was little, but it wasn’t until I picked up photography 18 months ago that I found a desire to capture the moments within the storms,” Staatz tells My Weekly Preview.

“The structure of the storms and the lightning is fascinating. There is a real beauty in storms, even though they look so angry, and it’s that raw power that I really love.

“You never know what you are going to capture.”

Staatz often goes storm chasing with fellow photographers Joe Donovan and Anthony Lombardi and says the number one safety rule is to stay in front of, or beside the storm and never find yourself underneath it.

“Of course, Mother Nature will do whatever she wants, so you’ve got to be ready for anything,” he says.

“Last year at Kings Beach, there was a big storm crossing over Caloundra that I was photographing, and a lightning bolt struck on the beach right in front of me, about 200 metres away.

“I captured the shot and when lightning hits sand, it can form a glass sculpture under the sand, so after I’d shot a few more photos, I went over to try to find the glass sculpture.

“Even though I could see where the lightning had hit, I couldn’t find the sculpture.”

Staatz hasn’t had to venture too far from home to capture his stunning images so far, with the Sunshine Coast putting on many impressive storm displays.

But this year, he hopes to head out west to Warwick, Beaudesert and Boonah, to where the storms often form, with the aim of snapping a colossal shelf cloud.

“Our main rule with storm chasing is to never get your hopes up – you can drive five to eight hours storm chasing and sometimes not get any photos.

“It’s all part of the game and it makes it sweeter when you do capture those amazing moments,” Staatz says.

“It is more about being in the right moment at the right time and while radars and weather websites can help, there is still a lot of luck involved with it and for me, that’s where the challenge lies.”

While the latest deluge to hit the Coast saw more than one month’s rainfall in one day at some locations, resulting in localised flooding, the only infrastructure damage were fallen powerlines at Bokarina and Wurtulla.

But with the Bureau of Meteorology predicting as many as four tropical cyclones could make landfall across the east coast of Australia this storm season, residents need to start preparing for the weather events that have the potential to pack a forceful punch, as we saw when ex-tropical cyclone Debbie impacted the region in March this year.

Sunshine Coast Council’s Acting Local Disaster Management coordinator Cathy Buck says the region’s Disaster Coordination Centre has become a “well-oiled machine”, with the ability to increase the day-to-day full-time staff of just three up to a massive 150 trained personnel if an alert level is activated.

“These people have various roles including manning the council’s field coordination centre, collecting information, dealing with requests for assistance and equipment, and coordinating with emergency agencies to make sure we are up to date with information.

“We also have field crews on the road fixing things, putting up signage and relaying information back to the coordination centre,” she says.

“At the end of the day, each alert is different and they all have their challenges.

“We have an all-hazard approach, so we can take on anything that gets thrown at us.”

Buck says while the Queensland Fire and Rescue Service is the lead agency when bushfires strike, they take on more of a support role in swift water rescue during severe weather events, with the council taking the lead role.

Buck says she is pleased to see more residents heeding the vital message, “If it’s flooded, forget it,” but the recent death of 67-year-old grandfather Neil Andrews at Mary Creek, near Gympie, after his vehicle became stranded in swift floodwaters is a reminder of how important the message is.

Being proactive is the key to success for storm safety and people don’t have to wait until a weather event is upon them to act.

Buck says there are many things every household and business can do to prepare themselves now to minimise the potential for damage to their properties and to keep them safe.

“One of the most important things is for people to have a plan and those who do are steps ahead to begin with,” she says.

“The plan will help you to think about where you can go if you need to evacuate and if you don’t have friends or family who can accommodate you, knowing where the nearest evacuation centre is.

“What will you do with your pets?

“People need to have emergency food and water supplies, enough to last them three days, in the cupboard. You will need long-life things that you won’t need to re-stock from the shop.

“And they will need to be able to tune into warnings and be aware of what’s going on around them.”

Residents and business owners should also take time to clear leaves from gutters and prune branches away from windows and the roof.

When a storm is approaching, people should scout the area around their homes and businesses to secure anything that has the potential to become an airborne missile if it is picked up by heavy winds.

“Recent events in our backyard have shown that the weather can change very quickly,” he says.

“We only have to think back to the damage caused by ex-Cyclone Debbie when it moved through our region – although in many ways it was a lucky escape.

“When it comes to extreme weather events in our region, it’s not a matter of ‘if’ but ‘when’.”

Jamieson says a three-step approach of accessing Coast Alert, checking out the resources of Disaster Hub, and undertaking a small amount of preparation now will ensure you are ready in the event of a natural disaster.

The Disaster Hub website is disaster.sunshinecoast.qld.gov.au and the newly-launched Coast Alert is accessible through the Sunshine Coast Council app, which is available to download free from Google Play or the App Store.

For the love of Dad
Pocket change