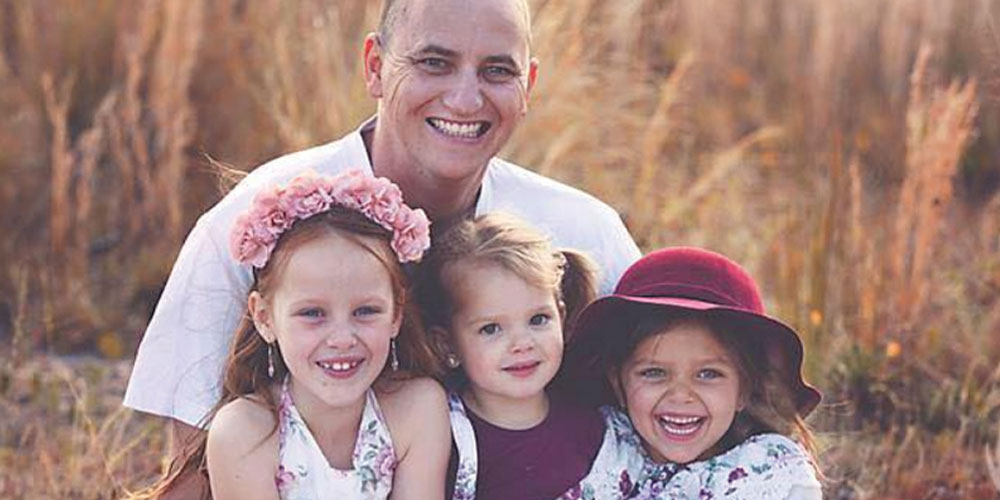 A young family is sewing their hearts out to raise awareness for brain cancer patients as well as keep the memory of their late father and husband alive.

Kelly Forster and her three daughters Lani, nine, Ayla, seven, and four-year-old Maddison have spent countless hours sewing hair scrunchies and head wraps since February this year and have raised $3500 for the Cure Brain Cancer Foundation and Bloomhill Cancer Care.

Ms Forster, who is a talented seamstress and creates unique children’s clothing through her brand Alani Designs, says her girls have fully embraced the initiative, which they have called Scrunchie Heaven.

The awareness drive started when Ms Forster purchased some fabric printed with the brain cancer ribbon to create outfits for her daughters after her husband Andrew lost his life to the disease.

She saw that scrunchies were making a comeback and decided to raise money by using the leftover fabric.

Ms Forster says life without Andrew is still hard, but her girls are her purpose and they talk about their father every day as well as enjoy things that he loved, like four-wheel driving and camping.

The first sign the family had that something wasn’t right was when Andrew, who was 38, suffered a seizure at work in 2017 while they were living in New South Wales. “He thought he had suffered from a stroke and he got to a doctor and was sent for an emergency CT scan, where they found a tumour
on his brain the size of a 50-cent piece,” Ms Forster says.

“It was on June 6 that he was diagnosed with stage-four brain cancer and on June 20 he was operated on in Sydney to remove the tumour and they did a pretty good job, but started radiation and chemo to get the remaining bits. He tolerated that well and we went travelling to South Australia and spent three weeks in a caravan exploring the Great Ocean Road.”

Five weeks before the diagnosis, they had bought a home in Palmwoods and decided they would still move up once the school year had finished.

“We always remained positive and stayed strong,” Ms Forster says. “We knew we could never beat this, as there was no cure, but we really thought he would have at least three to five years. It was only 16 months later he passed away.”

It has been 10 months since they lost Andrew and Ms Forster admits that every day is a struggle.

“The girls were able to be included in the whole process and able to say goodbye properly. They were not one bit scared and were so brave the entire time,” she says.

“We still have our sad days, and of course the nights are the hardest. But the next day, you wake up and put your big girl pants on and carry on. I am fortunate that I have so many friends and family there for support.”

Ms Forster says Bloomhill Cancer Care has been an immeasurable support for her family. And for now, the Forster family continues to raise awareness through Scrunchie Heaven.

You can support the family and Bloomhill Cancer Care by visiting facebook.com/scrunchieheaven.