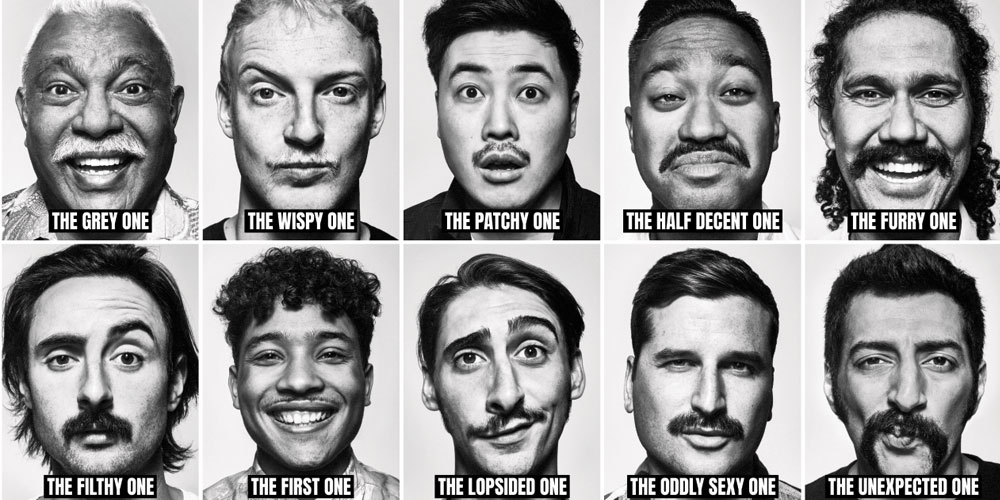 During the 2011 Rugby World Cup in Wellington, Wallaby Anthony Fainga’a was taken from the field after losing consciousness for more than a minute. It would not be the worst, or the last head knock he suffered. After enduring more than 500 knocks to the head during his rugby career, Fainga’a was left with severe symptoms that he couldn’t shake – blurred vision, a sore neck, fatigue.

He was worried it was a brain tumour, but it turned out he was suffering from post-concussion syndrome, a mild form of traumatic brain injury. However, it wasn’t until 2019 that he made the decision to put his health first, stepping away from the game not so much for himself, but for his wife and two children.

“At the end of the day, I was terrified I wouldn’t be able to remember my girls,” he says. “I didn’t want their childhood taken away from me.

“After playing in Japan for three seasons, I had opportunities to continue playing rugby but ultimately my girls and my family came first. Looking back now, I know I made the right call. If I was 25 and didn’t have a wife and two kids, I’d be playing. I’d just keep pushing along, but with two little kids I want to make sure I’m right for them.

“Now I’ve stepped away from the game, I know it’s not right to just keep pushing hard to play when you have head injuries. You do need to take the time to get your head right.”

Despite his decision to retire, Mr Fainga’a says he still thinks rugby is a great game and is grateful for the opportunities it gave him. It was a huge part of life for the Fainga’a family, which made Anthony’s decision to leave his career so difficult. His father, Saia Fainga’a snr, lived and breathed the sport, and instilled that same passion in all of his boys – including Anthony and his twin brother Saia jnr.

In 2017, Saia snr died unexpectedly after being bitten by a mosquito in Tonga and developing septicaemia.

“My father passed away four days after my daughter was born,” Mr Fainga’a says. “She was born, which was the best thing in my life and on the flip side of that, he passed away. I thought everything was fantastic and it went from high to low.

“Everything happens for a reason and I was very lucky, I surround myself with good people. I was able to get through that tough time. I moved back to Japan for two years – living away from everyone in a foreign country, it’s been tough, then to move back and try to transition from being a rugby player to working, it has been really difficult.

“My father was a big advocate of pushing through injuries in order to keep your spot on the team, no matter what. I wanted to make him proud, and it was a factor in why I had a ‘harden up’ mentality in regard to my health for so long.” 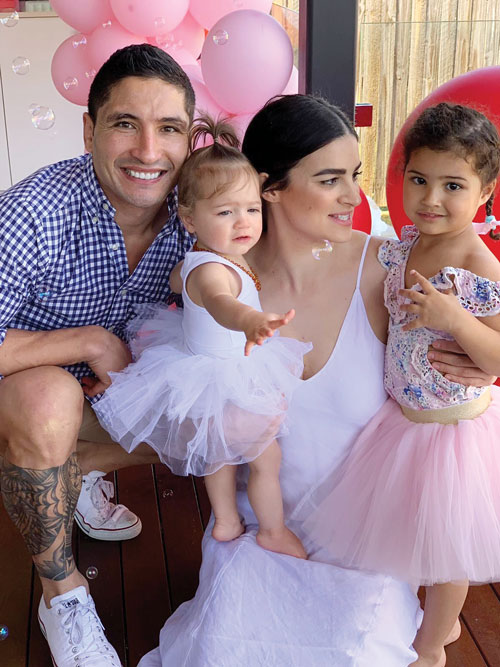 Anthony Fainga’a with wife Stephanie and daughters Malia, two, and Gia, one

Mr Fainga’a has now let go of that ‘harden up’ mentality that so many men experience. He has moved back to Brisbane with his family and is working in the bond and property insurance industry.

“I don’t miss [rugby] as much as I thought I would. I miss the camaraderie, I miss the wins and the losses, I miss getting into the change rooms and having a chat with the guys after we’ve worked really hard. But I will definitely never play rugby again. I won’t even play touch. I’m very happy with what I’ve achieved and my future now will be longer than if I’d stayed playing rugby.”

Although he says it has been a big adjustment, Mr Fainga’a is focused on looking after himself in his retirement and recently became a Movember ambassador.

“After retiring they reached out and I thought it was such a worthy cause, especially with what I’ve been through in the last few years,” he says. “If there’s any chance I could help anyone, I’d like to help.

“Until they can start replacing heads like they can knees and shoulders, I won’t be playing. My brother said, ‘why are you retiring?’ They made a bit of a joke about it. Still now, if you have a day off, people don’t understand. If you’re sick or vomiting they can see that, but we don’t know what’s going on inside people’s heads. I always feel the pressure of, do they believe me? Why don’t they think it’s all right?

“My wife took four weeks off work in the very early stages when I got a really big head knock to help me. People at her work thought, he’s only got a concussion, he’ll be right. It’s only rugby. They thought, he’s really taking the piss, why would you take four weeks off work? This was four years ago. Four years on, it still hasn’t changed. My wife has been so supportive and I’ve been very lucky to transition from rugby into corporate life.

“The biggest thing for me is to be able to have a really good, close family and having those people I meet up with once a week and have a chat and a debrief with about anything that’s going on. Those are the things you can’t buy. If you surround yourself with good people, they set you on a really good path.

If you are experiencing difficulties, call Lifeline on 131 114 or MensLine Australia on 1300 789 978. For more information visit movember.com/findhelp.

Grab Life by the Balls 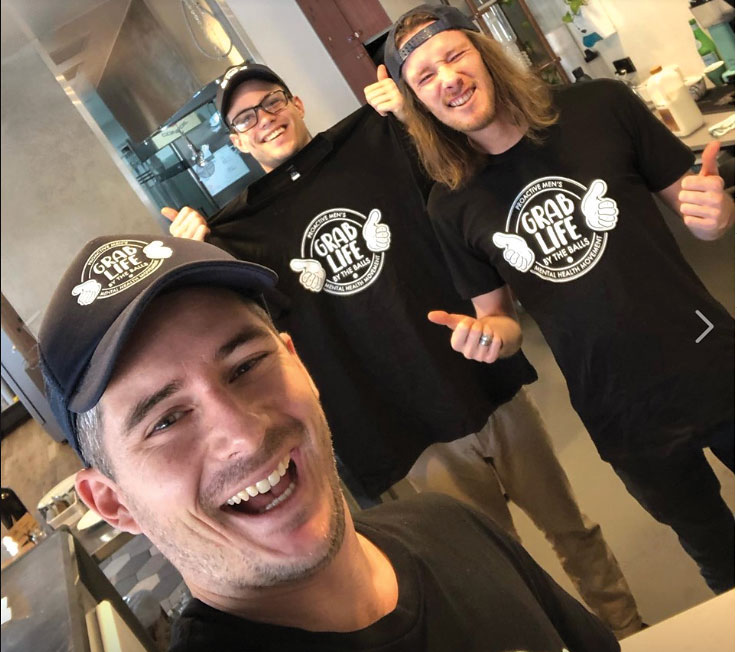 Grab Life by the Balls is a proactive men’s mental health movement that began here on the Sunshine Coast and has now spread across the country. Its founder, Sam Parker, realised there was a need for a way for men to connect with each other in an unstructured and relaxed way. In November 2016, he started a Bros, Burgers and Brews night in Mooloolaba, which morphed into Grab Life by the Balls.

“Essentially it’s mateship,” he says. “Guys just want to be themselves. They’re busy as most of them want to provide and protect their family and they’re working long hours. They key thing for men is to find time for themselves. This is an excuse to have bacon and eggs or a coffee and that mateship and rapport creates positive and proactive change around our mental health.

“It started off with me sending text messages around to my mates,” he says. “Twelve months ago we were on WIN News and things have taken off. Now we’re doing things in Noosa, Mooloolaba, Maroochydore and Caloundra – an array of things from coffee catch-ups to burger nights.”

Grab Life by the Balls has grown to encompass Toowoomba, Sydney, Newcastle, Port Stephens, Townsville, Brisbane, Melbourne, Perth and Adelaide. Now, a movement that began with a Sunshine Coast guy texting his mates, looks like it might go international, with interest coming from as far as Canada.

The team is working towards breaking a record for the world’s biggest barbecue for Father’s Day next year and hopes to go international by 2021.

“It’s so Aussie, it’s mateship, guys just hanging out,” he says. “Research shows having three really close mates is a predictor of wellbeing. There’s a lot of social isolation and loneliness and just having mateship and connection is such a simple thing.

“It’s a good bunch of blokes; they’re all very welcoming. If you come to our Friday morning barbecues, guys are all over you coming to say g’day and make you feel comfortable. We’ve had a few profound moments, some guys that said they were in a really tough spot when they first came along. It has really helped them.”

Men from their twenties to their seventies and over and from all walks of life attend Grab Life by the Balls events.

“It’s not structured or rigid, we don’t need to achieve anything. Just by coming together, the magic happens.”

The latest figures show that men living in regional Queensland have much higher mortality rates for both prostate cancer and suicide than men living in the greater Brisbane region.

Rachel Carr, Movember Australia country director says: “Sadly, the dire state of men’s health disproportionately affects those in country Australia. These men are fathers, brothers, partners and sons, and they are facing a health crisis which isn’t being talked about.

“Even one death from suicide, prostate cancer or testicular cancer is too many. This Movember, we’re encouraging men to take action for their health.”

In Australia, this year, 3300 men will die of prostate cancer, while more than 200,000 are living with the disease. Six men a day take their own lives and three out of four suicides are by men. Testicular cancer is the most common cancer in young men.

Last year, more than 1000 Mo Bros and Sistas across Sunshine Coast raised more than $219,000 to help stop men dying too young. “As a grassroots organisation, Movember started from humble beginnings as a conversation between two blokes in a pub,” Ms Carr says.

“Today, we are delivering breakthrough research and support programs that enable men to live happier, healthier and longer lives year-round – and that is all thanks to the remarkable fundraising efforts of communities like Sunshine Coast.”

Mo Bros taking part in Movember should sign up at Movember.com or download the Movember app and start with a clean-shaven face on Friday, November 1. After that, it’s as simple as letting their moustache grow for the rest of the month.

You don’t have to grow to save a bro – anyone can get their mates together and host an event this Movember. It’s as easy as getting people together for backyard cricket, a group shave-off of facial hair, a barbecue dinner or a movie night.

Make man time: Stay connected and spend time with mates, because social connections are a protective factor against depression, anxiety and even suicide. Try to check in regularly.

Move more: Add more activity to your day. Take a walking meeting, take the stairs, cycle to work instead of driving, get off the train a stop or two earlier.

Know your numbers: When you turn 50, talk to your doctor about the pros and cons of PSA (prostate-specific antigen) testing. If you are of African or Caribbean descent or have a family history, do it at 45.

Know thy nuts: Know what feels normal for you, and if something changes, starts hurting or doesn’t seem right, go to the doctor. You should be checking your testicles every month or so.

Talk: It’s okay to not be okay. Take action by opening up and don’t put off an important conversation. Talking saves lives.

Ask: Asking is the first step in being there for the men in your life. Keep an eye on men who are going through the big life stuff – if you think someone’s not doing too good, reach out to them. Remember: Ask, Listen, Encourage Action, Check in (ALEC).