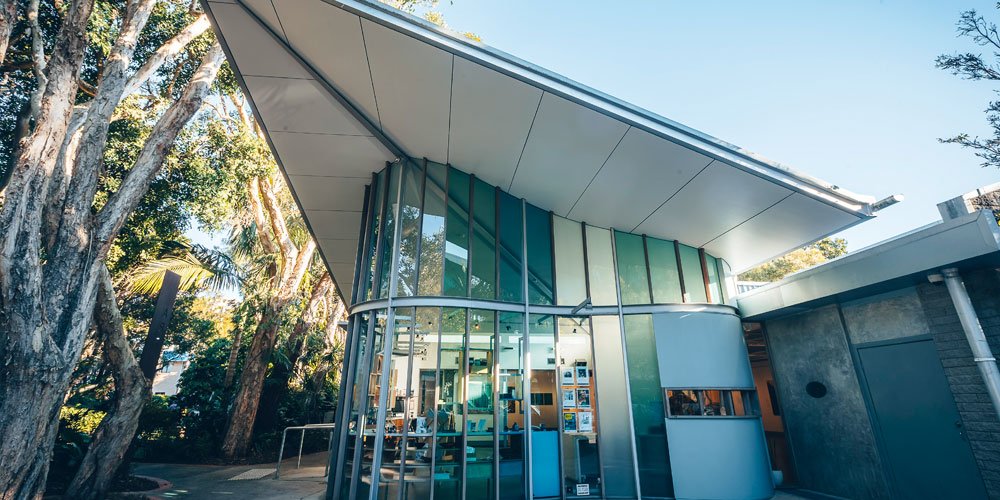 Artists have always been drawn to the Sunshine Coast for its stunning coastal landscapes, creative hinterland communities and landmarks like the Glass House Mountains, their beauty begging to be captured on canvas. But its status as one of Australia’s leading arts destinations is relatively new and is in large part thanks to the work of Caloundra Regional Gallery and its flagship event, the Sunshine Coast Art Prize (SCAP).

On August 11, Caloundra Regional Gallery celebrates its 20th anniversary and a program of exhibitions and events has been underway all year to mark the occasion. Over the past two decades, its reputation has grown interstate and internationally, particularly when the SCAP was launched in 2006. A national contemporary acquisitive award, the SCAP has become one of the most prestigious art awards in the country. This year, it attracted a record number of 711 artists (compared with 408 last year) vying for the top prize of $25,000.

Caloundra Regional Art Gallery isn’t just a gallery for Caloundra, but for the entire region. It is owned and operated by Sunshine Coast Council, which maintains a growing art collection that sits at 573 works with a value of approximately $1 million, including paintings, photography, works on paper, prints, sculpture, ceramics and textiles. The artworks are displayed in key locations across the region, including the public foyers of council buildings, libraries, venues and community halls. Pieces are continually rotated and are showcased through themed exhibitions at Caloundra Regional Gallery.

Well-known Sunshine Coast local Nina Shadforth is tasked with conservation and preservation of the works, curating exhibitions in public spaces across the region and acquiring works. A director of Caloundra Regional Gallery from 2012 to 2013, she is now the Sunshine Coast Art Collection curator. “My mission in this role is to make sure the community knows they have a beautiful public asset and I’d like to make it more accessible,” she says.

Five directors/curators have shaped the evolution of Caloundra Regional Art Gallery since its inception: Sandra Conte (nee Clarke), who was the first director from 2000 to 2004. John Waldron, who took the reins in 2004, served as director until 2012 and instigated the SCAP. Next up was Ms Shadforth, followed by Hamish Sawyer and current director Jo Duke, who came on board in 2019.

Two years before the gallery opened at its present site, Mrs Conte was asked to make a case for a regional gallery in response to community demand. She began exhibiting pieces from the council’s collection in the Beausang Room at Caloundra Events Centre, before the current site was identified and repurposed into a gallery space.

“We had 2000 people at the official launch of the inaugural exhibition in August 2000,” she says. That exhibition was Maleny artist Peter Hudson’s solo show, On His Selection, with Kids Earth Fund, a touring exhibition by Ondine Sherman.

Mr Hudson went on to win the SCAP in 2009 with his stunning oil on linen work, Law. He was also part of the group that originally approached Mr Waldron to instigate an art prize, along with then-councillor Dick Newman, gallery owner Tony Gill and artist Kevin Oxley. While they hoped to establish a hinterland-based prize, Mr Waldron believed it was better suited to the regional gallery.

“The SCAP is a very important prize and has put the Sunshine Coast art scene on the national map,” Mr Hudson says. “When you win a prize like that it just changes everything for an artist. It’s a good money prize, but it’s also a great confidence booster. It’s a nod that you’re doing something right. Most artists are kind of experimenting and problem-solving. Sometimes you don’t know where you’re going and you have to sort of back yourself and trust yourself. When you win a prize like that, it gives you confidence you’re on the right road.

“Both Caloundra Regional Gallery and the SCAP have been really good for the arts community in general on the Sunshine Coast. Not only has the gallery been a vehicle to showcase artists from the Sunshine Coast, but because of its touring exhibitions and its curated exhibitions, it brings artists into the area. It makes art much more accessible for local people.”

Continuing to make art accessible during COVID-19 is a challenge current director Jo Duke was not expecting when she moved to Currimundi from Gladstone to take on the role in September last year.

“It has been a very interesting time,” she says. “I arrived when the SCAP was opening and that was a wonderful introduction to the space and the community. From that we rolled out our Local Makers Local Content exhibition, which highlighted important places around the Coast. It was a lovely way to be introduced the art scene here. Then we had the Johanna DeMaine exhibition, which was 50 years of work by an absolutely pristine maker. In the eight months I’ve been here, I’ve had the breadth of everything you could think about.

“Then of course, COVID hit. That’s been a very interesting adventure. How do we continually engage with our audiences, locals and visitors who weren’t visiting as much, as well as our makers?”

The solution was to take it online, with artists who were contracted to exhibit later in the year doing 30-minute online conversations and showing viewers around their studios, which was a great success.

“Caloundra Regional Gallery has been fabulous for the last 20 years,” Ms Duke says. “I used to come to Caloundra every Christmas and it has changed dramatically since those days and become very cosmopolitan.

“It has been a decision by the council to expand and make an arts precinct here over the next five years. Hopefully it will become a bigger and better version of itself.

“I’m very excited to be working with such a dedicated team in a place where, not only is the environment extraordinary, but the calibre of the artistic community is extremely high.”

Reflections from the directors 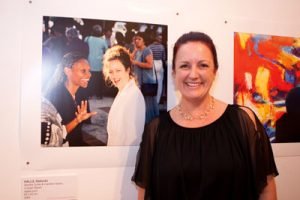 Caloundra Regional Gallery founding director Sandra Conte in front of an image, taken by Wild Honey Photography, of herself at the gallery’s official opening

“I think Caloundra Regional Art Gallery has brought a world stage and provided that world stage for the artists that we have here. Joanne Currie lived in Caloundra but no one knew about her. We met her and developed a relationship with her, then curated her first solo exhibition, which was just amazing. She went on to win the Wynne Prize, one of the most respected landscape prizes in Australia. We followed her journey and it has been wonderful to see these examples. That’s the true meaning of a regional art gallery in terms of its remit.”

“Sandi forged some valuable connections in the community and that’s one of the most important features of a regional gallery. Some of the projects I worked on were about providing additional opportunities further than the exhibition outcome. They were workshop opportunities, whether in the gallery or outreach activities, to offering opportunities to schools and communities to connect with artists and experience an artist at work first-hand. We were helping to build the community through the visual arts. New artists emerge or you provide interesting connections between professional and emerging artists. Caloundra is not a large regional gallery and on many occasions, it has punched well above its weight.”

“The early days were more about the local artists and progressively what I’ve seen is interest from national artists coming in. Broadly speaking, a regional gallery becomes a cultural focus for the region. The beautiful thing about this gallery is the community drive to actually get one built. There’s a lot of pride in that within the Caloundra community and the artist community. It was a significant step towards building a cultural landscape and encouraging creatives to have somewhere to show their art, or somewhere to engage in art, and broaden the experiences for visitors and audiences who come to the region.”

“I was there from April 2016 to August last year and it was a really exciting time for the gallery, but also to be on the Coast working in the creative arts. Over the last few years, the art and culture scene really matured on the Coast. Caloundra Regional Art Gallery has been significant in that because a regional gallery is your flagship visual arts venue. It has to provide a range of exhibitions and programs that represent local artists and provide exhibitions that showcase development in contemporary Australian art practices.

“The Caloundra Regional Gallery looks at the whole of the Sunshine Coast. The gallery is to be a voice for the whole area. Twenty years ago there was a strong commitment by community. They were the ones that advocated so strongly and the council agreed. We obviously want a bigger gallery and we want it to be internationally known. They really want a strong arts precinct here from the Events Centre through to the library, through to the gallery and to Bulcock Street and down to the beach frontage. We’re so excited and the community has had lots of say in it as well.”

Friends of the gallery 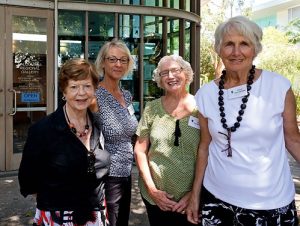 In early 1995, a group of artists and community members formed a committee to investigate the possibility of opening an art gallery in Caloundra. Called the Caloundra Regional Art Gallery Society, they are now known as the Friends Regional Gallery Caloundra Inc.

“It is thanks to this group of dedicated volunteers and their investment of time and expertise, that we have our fantastic Caloundra Regional Gallery today,” arts portfolio councillor Rick Baberowski says.

“Today, the gallery is a key element of Caloundra’s civic and cultural heart and we will be forever grateful to the friends of the gallery for their wonderful support.”

The original society held fundraising barbecues, lunches, dinners and art auctions to gather the funds for a gallery.

For more information and to join the Friends, visit the gallery website or find the group on Facebook.