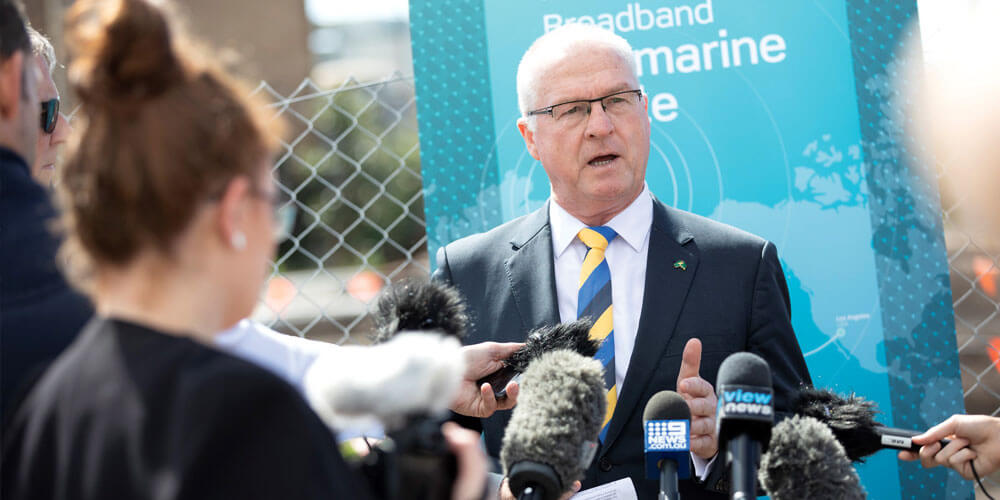 The much-anticipated submarine cable has been approved and will be operational by 2020. The 550-kilometre cable will connect the Sunshine Coast to the 9600-kilometre Japan-Guam-Australia-South submarine cable and provide the fastest data and telecommunications transmission speed from Australia to Asia.

“These speed differences may not seem like much, but they are important for a range of businesses and industry in the banking, finance, film production and applications development sectors, as well as for those businesses that operate on a high volume [of] online transactions,” he says.

“It will offer greater redundancy and diversity for Queensland and Australia as all eastern seaboard data will not have to go out through Sydney, opening up improved economic opportunities for SEQ and the rest of Queensland.”

Three main contractors will be involved in the delivery of the submarine network – Alcatel Submarine Networks (ASN), RTI and the Sunshine Coast Council.

ASN will provide the submarine network, which will include the marine route survey and the design, manufacture and laying of the submarine cable. It will also supply, install and commission equipment in the cable landing station.

RTI will project manage the delivery of the trunk cable from Guam to Sydney, and the branch cable that will connect to the Sunshine Coast. RTI will also take the lead in negotiating sales of capacity on the network.

The council will take the lead on the land-side infrastructure associated with the network, including the cable landing point where the cable will come ashore, the cable landing station where the cable will join the terrestrial network and the connection between these two points. The council is also actively promoting the investment opportunities available on the Sunshine Coast associated with the benefits of the submarine cable both domestically and internationally.

Cr Jamieson says this station is likely to be the only new branch to be built in Australian in the next seven to 10 years as the process takes between eight and 10 years from planning to installation.

“The second key milestone that needs to be achieved by the end of 2018 is the marine route survey. Council has previously received a desktop survey of the proposed cable route and the next key step is the completion of a physical marine route survey,” he says. “The survey will capture detailed information relating to the sea bed, which will help to determine the final cable route.”

Before the cable can be physically laid, there are a number of permits that need to be obtained from both the Queensland and Australian governments and work has commenced on preparing information and applications for those permits.

“Once manufactured, the submarine cable will be laid by ASN using specially designed ships that carry the submarine cable on board and lay it out on the seabed,” Cr Jamieson says. “Depending on the specific ship, there will be several thousand kilometres of fibre laid from a ship at any one time. For such a high-tech project, one of the most interesting aspects is that the cable is loaded on the ship by hand.

“The loading of the cable is likely to take several weeks to complete. In shallow waters the cable will be buried to avoid being damaged by ships anchors and other potential hazards.”

While the benefits for the business community have been highly publicised, with the cable providing a magnet for companies of all sizes looking to capitalise on increased speeds and connectivity, Cr Jamieson says there will also be plenty of employment opportunities that will flow on from that.

“These jobs will be for those already in the workforce but more importantly, the project will open up career opportunities for current and future generations on the Sunshine Coast,” he says. “The founder of Youi calls it the ‘tipping point’ and says this announcement confirms their strong belief in the region and their original decision to establish their global headquarters here.

Around 550 kilometres of undersea cable will be laid.
This will connect the Sunshine Coast to the 9600-kilometre Japan-Guam-Australia-South submarine cable.
The cable will be operational by 2020.
Independent modelling forecasts it will create up to 864 new jobs and up to $927 million in new investment.
The investment of up to $35 million in the undersea cable connection plus supporting land-based infrastructure is being jointly funded by the Sunshine Coast Council and the Queensland Government.