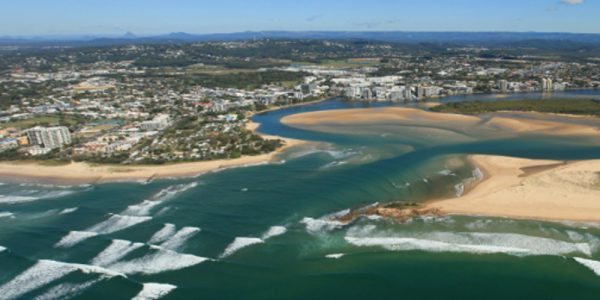 An independent chair has been appointed to lead the newly-established Maroochy River Estuary Consultation Group (MRECG) to look at and review submissions on the proposed options for the renewal of the groyne field at the mouth of the Maroochy River.

The Sunshine Coast Council endorsed the Shoreline Erosion Management Plan (SEMP) 2014, which called for investigation into coastal infrastructure upgrades as structures like the geobag groynes and seawalls constructed by the council in 2003 have “reached the end of their useful life.”

The MRECG will be independently chaired by Emeritus Professor John Martin, from La Trobe University.

Martin’s first task is as part of a three-member panel, including a council staff member and a representative from the mayor and CEO’s office, to assess the expressions of interest for a number of positions on the consultation group.

The group will review feedback from local surf clubs, environmental groups and Indigenous community representatives along with State Government agencies, the Maroochydore Chamber of

Commerce and the University of the Sunshine Coast.

Some of the options being investigated by the council include works to move the mouth back to the north of Pincushion or alternatively, armouring the southern shoreline with rock groynes and walls.

However, former Maroochy Shire councillor and Sunshine Coast Environment Council life member Jim Cash says, “History clearly shows the Maroochy River has had a restrictive entrance for at least the last 175 years and yet people still call for its dredging on the false basis that it is silting up,” he says.

Cash says the river mouth has oscillated about Pincushion Island a number of times in the past 160 years and has “never encroached” into the Cotton Tree precinct.

He also points out the precinct, including the camping ground, was developed at the turn of the last century and coexisted with a southern entrance up until 1959 without it being impacted, let alone “washed away”.

War on waste: Navigating the fashion trend mill
How apprenticeships offer a solid path to success