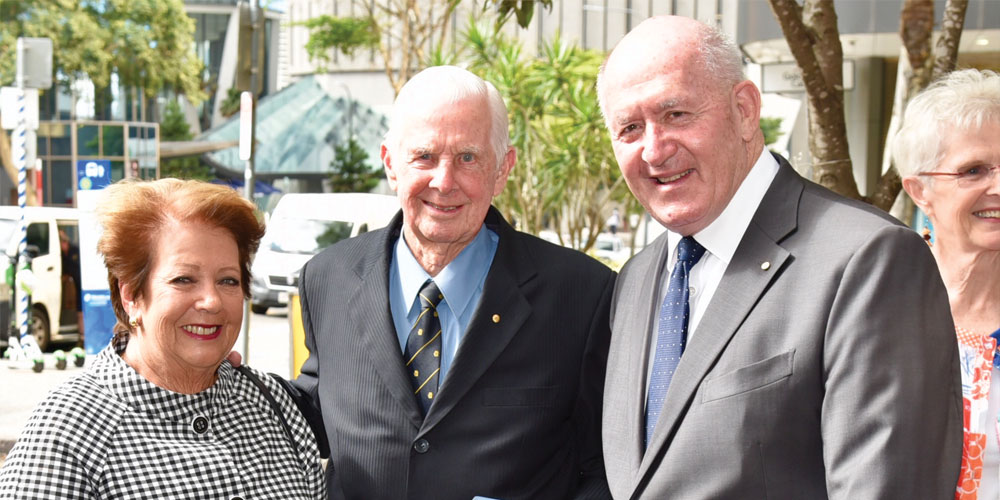 Dreams do come true, according to Marcoola resident Ken Chadwick OAM. The 91-year-old director of the Sunshine Coast Concert Band was delighted to have the opportunity to meet one of his heroes, Sir Peter Cosgrove, at a lunch to honour Queensland awards and honours recipients in Brisbane on April 1.

The way this meeting came about is heart-warming story. In October 2018, My Weekly Preview published a Quick Chat piece on Mr Chadwick, in which he revealed the three people he’d most like to have dinner with were a friend of 79 years, Peter Lambert, along with Nelson Mandela and Sir Peter Cosgrove.

Buderim resident Rod McKinnon is a retired military officer who knows Mr Chadwick through their mutual involvement in the Buderim Anzac Day commemoration. A former colonel, Mr McKinnon worked with Peter Cosgrove in the late ’80s and early ’90s. Upon reading the article, he sent it to General Cosgrove, saying if there was ever an opportunity, there was someone who would like to meet him.

“When Rod McKinnon called me in early March to say the Governor-General wanted to invite me to lunch, I was sceptical at first,” says Mr Chadwick.

“I never remotely thought that I would ever come into contact with him.

“On entering the restaurant, Sir Peter came to me, shook my hand and said, ‘you must be Ken Chadwick, it’s nice to meet you and I’m glad someone wants to have lunch with me’. I was seated across from Sir Peter at the dining table and he created such a friendly and relaxed atmosphere.”

To top off one of the most memorable days of Mr Chadwick’s life, as the group gathered for a photograph after lunch, Sir Cosgrove presented him with the Governor-General’s Medal.

“I am 91 years old now and this was an occasion I will never forget,” says Mr Chadwick. “It was a wonderful day, which started with a small article five months previously. This act of Rod’s I find to be a beautiful gesture of kindness, selflessness and love and I’m forever indebted to him. It could have been an April Fool’s joke, but it certainly was not.”