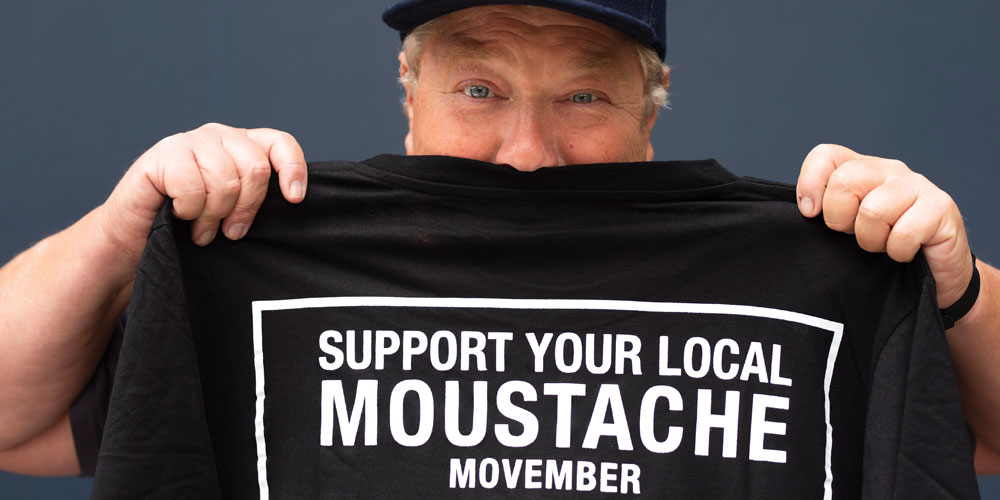 It was a Friday night in June 2017 and all of his mates were having drinks to farewell a Studio 10 colleague when Jono Coleman received unexpected news that would turn his life upside down.

“I never miss Friday drinks, but here I was with a man with his finger up my bottom,” Mr Coleman says.

It was his trademark humour that got the renowned radio and television personality through treatment following a prostate cancer diagnosis. He kept the news under wraps and continued with his regular daytime appearances on Studio 10 and working on his radio show for Macquarie Radio each night while undergoing treatment.

It was July this year when Mr Coleman was satisfied that he was “99 per cent in the clear.” It was then the 62-year-old opened up about his diagnosis on an episode of Studio 10.

He has now become an ambassador for men’s health organisation Movember and is passionate about raising awareness about the importance of early detection for prostate and testicular cancers.

One in eight Australian men will be diagnosed with prostate cancer before the age of 75 and Prostate Cancer Foundation of Australia statistics show 98 per cent of men diagnosed with early-stage prostate cancer have a chance of survival beyond five years. If it is detected in the advanced stages, this rate drops dramatically to just 26 per cent.

With no outward symptoms, it was early detection through a routine prostate- specific antigen (PSA) blood test with his GP that saved Mr Coleman’s life.

He says he had been having his cholesterol tested every six months and decided to check his PSA levels at the same time. When his June test showed a jump from two to seven on the scale, he was sent straight to St Vincent’s Hospital in Sydney for a digital examination.

Dr Phillip Stricker, whom Mr Coleman fondly calls “the prostate cancer guru”, did not take long to find that the award-winning performer’s prostate was enlarged and treatment began the following day.

“The cancer had already jumped out and was in my lymph nodes and a bit of bone in my hips, about four spots,” he tells My Weekly Preview. “The doctors didn’t want to wait, so they blasted it with chemotherapy and then I had seven weeks of radiotherapy after that, zapping the prostate.

“It doesn’t hurt at all, it’s all about getting in there fast and blowing the sh*t out of it and beating it over the head with a giant medical hammer. For me, I felt I had to be aggressive back to the cancer and let it know I wanted it out of my body.”

Mr Coleman says he had to build up the courage to tell wife Margot Fitzpatrick and call his children Oscar and Emily, now 24 and 21 respectively.

“Margot was straight onto talking about how we would beat this thing. The kids had a typical Coleman family reaction. Oscar asked if he could speak at my funeral and who was going to inherit my vinyl collection,” he chuckles.

“Emily, who was in Europe at the time, asked if my will was up to date. I had to remind them, ‘excuse me, I’m not dying, I’m just about to start treatment’.”

Mr Coleman says while there were moments just before starting chemo or having a PET scan that his mind would wander into the realm of ‘what ifs,’ he would remind himself how many others had fought and won their battles with prostate cancer and his usual positive mindset returned.

“While there are moments where you can freak out and have the opportunity to become depressed, there’s simply no room for Negative Nellies,” he says.

“There are so many people I know or was lucky enough to have met, like Ben Stiller, Robert De Niro, Kirk Pengilly from INXS, former treasurer Wayne Swan, who have had prostate cancer and none of those people have died, so what’s the problem? It’s much better to have a positive vibe.”

Speaking from his home in Rushcutters Bay, Mr Coleman admits he didn’t know where his prostate was “until it got damaged”, but once the initial shock of the diagnosis wore off, he became fascinated by how advanced medical research is constantly improving outcomes for patients.

“They are trialling smart drugs now that target cancer cells by destroying them individually. [The drugs] pretend to be cancer cells and then join onto them and blow them up from the inside,” he says.

“There are other trials going on where they give prostate cancer patients a large injection of testosterone, which prostate cancer thrives on, they then blow the hell out of it by giving the cancer exactly what it wants. This is all exciting stuff.”

Mr Coleman encourages men and women to start having conversations about their health with their GPs and for men to request the simple PSA blood test and take action immediately.

“Women have to have their breast checks and smear tests and guys can’t imagine having to do that. All we’ve got to do is get a bloody blood test and maybe a finger up your bottom to find out what’s going on,” he says.

“I’ve already had a woman in Queensland contact me to say she began nagging her husband to get a test after seeing me on Studio 10 and when he did, it saved his life. It’s not a scare tactic. It’s simply a matter of demonstrating how worthwhile it is to get that test.”

Now that treatment is complete and he is down to regular check-ups, Mr Coleman and former radio co-host Russ Williams are about to re-launch the popular Russ and Jono Show, which reached number one during its heyday from 1993 to 1997 on Virgin Radio in the UK, with 10 fresh Rebooted podcasts on November 5.

During men’s health month, Movember also encourages men to share their emotional loads with others in the name of suicide prevention. This is a cause close to local resident Wayne Taylor’s heart.

The 39-year-old Sippy Downs plumber is on a mission to lower male suicide rates by providing a platform for men to connect simply by meeting once a week for a beer or a coffee.

It is a long and lonely road that leads men of all ages to contemplate suicide and the Mr Taylor says the age-old Aussie tradition of catching up over a cold one has fallen by the wayside as modern lifestyles and increasing commitments leave little time for the knock-off catch-up with mates.

Mr Taylor says this has resulted in more men than ever feeling isolated and when they begin to sink into negative thought processes with no one to pull them out, it is easy to spiral downwards into depression. His initiative, Average Joes, aims to catch men before this happens by giving them a social outlet and connection to new like-minded friends.

Mr Taylor and longtime friend Eliot Krause had been meeting once a week for beer and chicken wings and it was a simple thought to extend the invitation out to the community that saw the birth of the Average Joes movement.

It has been so popular that as many as a dozen men aged from their twenties to eighties connect on the Coast each week, and ambassadors are launching new meet-up locations in Perth and Sydney.

When you consider Movember statistics that show 70 per cent of men say their friends can rely on them for support but only 48 per cent would ask their friends for that same support, feeling comfortable reaching out is crucial.

Mr Taylor says because Average Joes meet at familiar bars or cafes, it’s not long before the men “drop their shoulders and drop their guard” and share open and honest conversations.

“While a lot has changed in society, men still feel that being weak is not okay and they hide it under a rug. The world is on your shoulders sometimes and it’s heavy, but when you are feeling weak and you sit down with men around you and share that load, they make you feel strong,” he says.

“Men are natural problem-solvers and if one man opens up about what is challenging him, the others will be quick to offer support and advice.”

Mr Taylor says the group will never ask, “how are you?”, because we are all conditioned to reply with one-word answers. Instead, they ask participants to tell them about their week.

“There is a statistic that says six Aussie blokes will kill themselves each day and it’s terrible. But what about the other men who are on the path of loneliness and that’ve had a sh*t week and they are walking further down that path?” he says.

“We are too busy trying to cut down the tree instead of paying attention to what is happening at the roots. Society is forgetting the fundamentals of relationships.”

Mr Taylor says in the past, Neighbourhood Watch stickers were beacons of light for people seeking comfort and safety and although the movement has faded, he wants Average Joes to be the modern version for men.

To find out where your local Average Joes meet-up is, how you can join or show your support as a sponsor, visit facebook.com/AverageJoesAustralia.

Simple steps for keeping on top of men’s health

Most prostate cancer is diagnosed during GP check-ups, but some men can experience symptoms such as changes in urinary or sexual function. Men should begin routine prostate specific antigen (PSA) blood tests at the age of 50, or 45 if you have a family history.
All you have to do is:
• Request a PSA test from your GP
• Get the routine blood test done
• Discuss any changes in your results with your doctor and plan when you should have your next test done.
For tips on how to ‘Know Thy Nuts’, and conduct self-examinations for early detection of testicular cancer, visit movember.org.au.

A dream comes true
New shopping centres to be unveiled