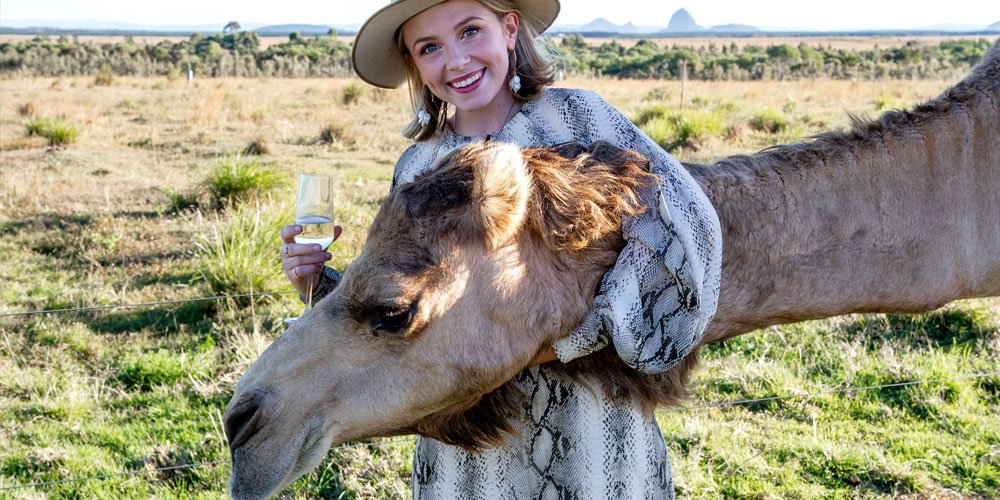 Is everyday hump day when you work on a camel farm?

One Sunshine Coast family is forging the way in camel farming, having created an innovative business to make the most of a lesser-known but nutritious product.

Set on 607 hectares in Bells Creek, with the Glass House Mountains as its backdrop, QCamel is the only certified organic camel dairy in the world and is growing from strength to strength with a winning combination of science and a lot of love.

Owners Lauren and Peter Brisbane began the business in 2014 and now have 120 camels on site.

Ms Brisbane says QCamel is not your typical dairy, with the friendly animals always up for a cuddle, especially as part of farm tours. “It’s a tonne of fun – people love coming to us.

“We just do things a little bit different and involve the community in what we do,” she says.“We don’t change who our camels are; we allow them to live the way we want to live, and they are very well looked after.”

Living in central Queensland in the 1990s and 2000s to raise their three children Yasmin, MacKinley and Harry, Ms Brisbane took a liking to camels for their resilience in drought.

In 2006, the Brisbanes funded a two-year study into the development of the camel industry and established the Australian Camel Industry Association.

It was then they decided to go into farming and focus on the health benefits of the milk product, integrating camels as “business partners” rather than stock.

“They are all named, and they all know their names, and they are loved and they know nothing but love, so that’s what they give back, they give love.”

Ms Brisbane says camel milk has a range of benefits, particularly for gut and skin health, and is high vitamins A, B, C and E as well as calcium.

“Camel milk has a different molecular make-up to dairy milk, so it’s actually the closest milk to human milk.

Ms Brisbane says with high levels of insulin it is a popular choice for diabetics and has several benefits that can reduce the effects of autism in children.

The milk itself is described as tasting almost identical to cow’s milk but is slightly salty with a sweet aftertaste.

QCamel has a range of other products, including cheese and chocolates, as well as a skincare line that launched last year.

“It’s suitable for sensitive skin and each one is mixed with a native Australian botanical.”

QCamel is stocked at White’s IGA stores across the Sunshine Coast as part of the Locavores program promoting products grown and made within a 200-kilometre radius.

The farm also hosts regular Camels and Canapes tours, giving people the opportunity to get up close with the lovable animals.