The jobs of the future are not as futuristic as you might think. In fact, one of the country’s most successful young entrepreneurs says it’s not only artificial intelligence, virtual reality or  IT enterprises that will provide future generations on the Sunshine Coast with meaningful employment – it’s building on and innovating in the seven high-value industries already thriving here.

And Jack Delosa, who was just 26 years old when he had established multimillion-dollar businesses Entourage and MBE Education, says this possible future comes down to just one word – entrepreneurs.

The Coast has been widely recognised for punching above its weight when it comes to entrepreneurship and according to experts across a range of fields, this will stand the region in good stead to tackle rapidly changing work environments well into the future.

Queensland’s first chief entrepreneur Mark Sowerby says the Coast is the most entrepreneurial area in Australia.

Social commentator Bernard Salt says the Coast has earned that title based on the proportion of the workforce who own their own businesses.

Of the more than 60,900 small businesses in the region, 60.8 per cent are sole operators and the largest industry sector by number  of businesses in the area is construction, followed by rental, real estate and professional services.

Scientific and technical services are placed fifth on the list.

Entrepreneurship and innovation have become buzz words that are rapidly fired around in all industries and no one knows them better than Mr Delosa, who has been  on BRW’s young rich list since 2014.

He visited the Coast last month to speak at the Caloundra Chamber of Commerce’s Better Business Breakfast about disruptive innovation and he tells My Weekly Preview there have never been fewer barriers in place to prevent people from being self-employed.

“Entrepreneurship is a rising tide globally because more and more people are becoming dissatisfied with traditional education and career paths.

“We have seen parents work incredibly hard for 40 to 60 years and not achieve the level of financial independence or freedom to give them a meaningful financial existence in retirement,” he says.

“To start a business 30 years ago, you needed a factory, an office, staff, stock and so the barriers to entry were high and starting a business was reserved for a small minority of people.

“In 2018, these barriers don’t exist. Anybody with a laptop, phone and internet connection can start what can become a hugely successful business.

“The people on the covers of magazines 20 years ago were the Bonos and Michael Jacksons.

“Today we see the Sir Richard Bransons and the Mark Zuckerbergs of the world.

“People of any age and societal class can identify with the idea of taking their own career and their own life into their hands and striving to do something they enjoy while becoming successful.”

While he admits this is a romanticised vision most would-be entrepreneurs have,  Mr Delosa says most quickly realise they are entering what he calls a VUCA environment – one that is volatile, uncertain, complex and ambiguous.

“The traditional job path is quite linear and has a lot of security, but the VUCA environment means entrepreneurs need to assess whether they have the emotional fortitude required to stick with their plans long enough to be successful,” he says.

Those wanting to forge a path in the tech industry dream of creating what is known as  a unicorn, a privately held startup valued at more than $1 billion.

Even the Queensland Government, in its South East Queensland 2014 Startup Ecosystem Report, outlines a desire to foster and attract unicorns.

“To ensure the majority of this value is created and retained by local companies, Queensland will need more than 3000 startups, hundreds of established technology companies and a unicorn or two.

“Without this, economic growth will be lost to international competitors,” the report states.

But Mr Delosa disagrees. He says while unicorns can “technically come from anywhere,” he believes the Sunshine Coast is better off placing more effort into small- and medium-sized business across all seven of the Sunshine Coast Council’s key industries, and not just those with a technology focus.

“Unicorns are so few and far between that they are given a disproportionate amount of focus.

“We need the juice bars, the personal trainers, the consulting businesses, the recruitment companies – this is where the  job growth comes from and this is how you stimulate the economy and the local ecosystem,” he says.

“There is no doubt there is a new wave of technologies coming in, with virtual reality and artificial intelligence among them, but we need more of a focus on consumer-based products at a grassroots level.”

On a visit to the Coast earlier this year, award-winning social researcher, futurist and demographer Mark McCrindle analysed the 2016 Census data for the region and said we were already ahead of the game in terms of future-proofing our workforce.

“The workforce of the future will look  for opportunities beyond traditional employment,” he said.

“Things like the gig economy, start-ups, coworking spaces – these are the ways and means of working in the future and it is radically changing this generation.

“The key to driving future success is a  mix of education, flexible workspaces and collegiate opportunities for like-minded professionals.

“We see that [on the Coast] already, with the number of start-ups, tech corridors starting to emerge and the fact the Sunshine Coast provides what this generation looks for, which is a work/life balance where lifestyle can be mixed with earning opportunities.”

Before he was elected as Member for Fairfax, Ted O’Brien established Generation Innovation (GI), a program that fosters young entrepreneurs and provides them with professional guidance.

He says the program, which is now seeking participants for its fourth year, builds business experience, networks and capital for young entrepreneurs to launch themselves into the active market.

“GI is all about finding that sweet spot,” he says.

“Every participant has to identify where their passion overlaps their ability and then we see if that also overlaps with market demand.”

Mr O’Brien says uncertainty is the new normal and the way to strengthen the workforce of the future is to build resilience and beyond that, economic independence.

“When we use innovation as a word, people think automatically it’s all about technology. But technology is just an enabler of innovation.

“It’s the established industries that are the drivers, albeit some more than others. While education in things like AI, robotics and science and maths are still critical, we need to be very careful that we don’t exaggerate their impact and make everyone think that have to become tech geniuses.

“The more we can get our small-  and medium-sized businesses across all industries creating new opportunities, the stronger our future will be.”

One of the great GI success stories to come out of the 2017 program is already flying high.

St John’s College student Eamon Kriz was 15 years old when he joined GI to investigate whether he could transform his passion for piloting unmanned aerial vehicles, or drones, into a viable business.

He became the youngest person to win a GI challenge with In The Air, which catapulted him into the local business scene while he was still in Year 10.

“My original focus was to provide the service for individuals who just wanted footage of themselves competing in or enjoying their sport, but going through the GI process saw me move more towards event-based aerial cinematography,” Eamon says.

Now in Year 11, Eamon is juggling school work with studying a diploma of business and working for his In The Air clients.

He credits GI’s crowdfunding push for helping him to raise enough money to get his remote pilot license, which will enable him to fly commercially and stand him in good stead for a future in the industry.

Entrepreneurs of all ages are finding support through a number of networks, which will benefit from the February release of the University of the Sunshine Coast School of Business and Sunshine Coast Council report Sunshine Coast: The Place To Be – Encouraging An Entrepreneurial Culture.

Focus groups and interviews with entrepreneurs during the creation of the report allowed researchers to develop 14 ‘personas’ that exemplify entrepreneurial approaches on the Coast, from experienced industry leaders to owners of small part-time businesses.

“Our research shows that different entrepreneurs need different types of support,” she says.

“This research is unique and has a practical outcome, helping further the economic growth of this region by providing a baseline for supporting entrepreneurs through a deeper understanding of the different types of entrepreneurs.”

For Soak Society founder Natalie Thorogood, it was being part of the inaugural Spark Bureau group two years ago that helped her reconnect with the Coast community after living in Brisbane for 10 years.

Ms Thorogood says she felt supported not only by friends and family,  but the wider community when she decided to move to Coolum to focus solely on her business, which manufactures and sells natural bath products.

“We needed to find  a warehouse space and I quickly became grateful that I chose the Sunshine Coast because the rent here is a lot cheaper.”

She says a property like that in Brisbane near the airport “would be twice the rent, and I also get to have a five-minute drive to work and to be able to go to the beach and live a balanced lifestyle.”

Ms Thorogood was selected to attend a seven-day digital detox, called the Venturer Mission, in New Zealand at the end of March and reports that this financial year, Soak Society is on track to double last year’s turnover and double the profit.

“Export has been the key for me. It’s definitely very daunting at the start, but to have a profitable business, you just can’t focus on Australia. We simply don’t have the population here,” she says.

“I would say to all entrepreneurs to never let lack of experience stop you. I haven’t come from a very entrepreneurial family. I was stubborn and knew what I wanted to do and just figured it out along the way.” 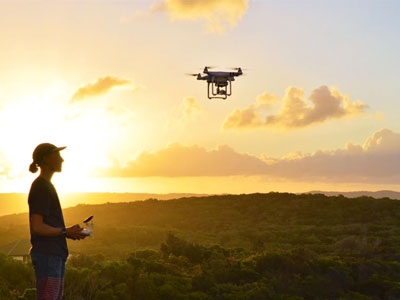 What are the Sunshine Coast’s seven high-value industries?

Police out in force
Peter Watt, the bloke with the big stories